Three years after Kalamazoo spill, Enbridge to BC: "You can trust us." Can we?

On the third year anniversary of the Enbridge, Inc. oil spill into the Kalamazoo River in Michigan, due to "pervasive organizational failures", reflections on the company's proposal to build a pipeline through British Columbia. 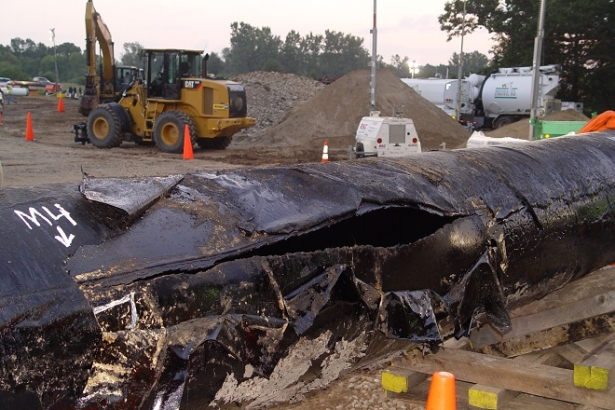 July 25, 2013 marked the third Anniversary of the Enbridge pipeline rupture near Marshall, Michigan, the worst land based oil spill in U.S. history.

Despite numerous alarms from their automated leak detection system, the spill went undiscovered and unaddressed by Enbridge for almost 17 hours.  Not until the Edmonton control centre was notified of the rupture via a telephone call to their emergency line, were the remotely controlled valves of the pipeline closed by control room staff.

By that time, more than three million litres of tar sands bitumen had spilled into an adjacent wetland and then into Talmadge Creek, eventually making its way into the Kalamazoo River.

Through the Joint Review Panel (JRP) process for the proposed Enbridge Northern Gateway pipelines project and with research I have done outside of it, I have followed the developments of the Michigan spill and sought the answer to that question.

As a member of the Fort St. James Sustainability Group and intervenor in the JRP process, I have read all material filed as evidence in regard to the Michigan spill.

Little information was provided by Enbridge Northern Gateway as they claimed the NTSB had instructed them not to talk about the spill while it was under investigation.

Following the release of NTSB’s report on the spill in July 2012, it was filed into evidence and became a point of examination for many intervenors.  I questioned Enbridge Northern Gateway witnesses on aspects of that report.  I asked what lessons had been learned from the Michigan spill, if the lessons had been implemented, and how the lessons would apply to the Enbridge Northern Gateway pipelines so that the same thing doesn’t happen from them.

What I heard from the witnesses was that lessons were learned, some lessons had been implemented by Enbridge, and others would be applied to the design and operation of the proposed Enbridge Northern Gateway pipelines.  In answer to the question, they said, you can trust us.

“However, to the extent that Intervenors attempt in argument to focus the JRP in any way on an inquiry into the root causes, environmental or other impacts or any other aspects of the Marshall Incident, such arguments should be disregarded.”

In other words, they said again you can trust us, but they also said nothing else is relevant.

The research I did on the Marshall spill outside of the JRP process told a very different story, and lead the Fort St. James Sustainability Group to encourage the JRP through our written and oral arguments to consider and weigh heavily the Marshall spill report, and other reports on past, current-day and on-going Enbridge pipeline spills and incidents in their deliberations.  In other words, we said: don’t trust them.

Through my research I learned that one of the “pervasive organizational failures” at Enbridge is still having an impact today, and will have well into the future if not in perpetuity; that is ineffective emergency response, which I looked at from a cleanup perspective.

See more
Foreign procurements taking jobs from Canadians
Despite rejecting Northern Gateway, is the BC government doing everything in its power to enable it?