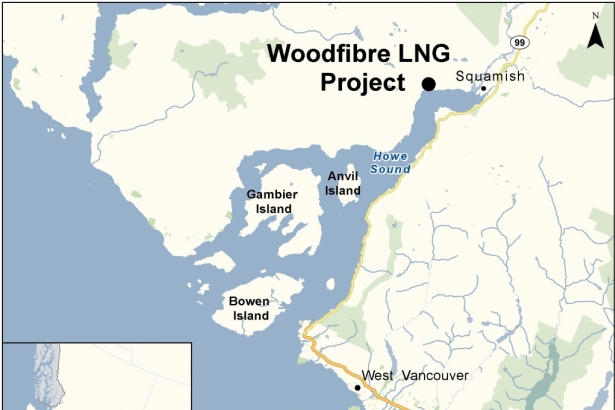 If you were busy enjoying the holiday season with your family, you might have missed a request for public opinion made by the federal government on December 17, 2013.

The Government of Canada was seeking comments from the public on the proposed Woodfibre Natural Gas Ltd. export terminal that will operate for 25 years in Howe Sound producing between 1.5 and 2.1 million tonnes of liquefied natural gas (LNG) annually.

B.C. and the Canadian Environmental Assessment Agency have a memorandum of understanding that allows the province to oversee environmental assessments and First Nations consultation under certain CEAA 2012 provisions.

The project includes the construction of a liquefied natural gas facility seven kilometres southwest of Squamish on the northwestern shoreline of Howe Sound, according to a Government of Canada press release. Both a liquefaction plant and a LNG export facility would be built to ship B.C. gas to global markets.

As Mark Hume writes for the Globe and Mail, B.C. Premier Christy Clark’s rush to develop the province’s natural gas resources while scaling up the production and export of LNG could raise opposition with local communities feeling hoodwinked by inadequate public consultation and environmental review.

In the case of this proposed facility, the public comment period overlapped with Christmas, Boxing Day and New Years, leaving a paltry 10 days for individuals to research and formally submit their concerns. That is, if they were even aware of the proposal.

Vel Anderson, member of the Elphinstone Electors Association in Gisbons B.C., told the Globe and Mail her community did not have time to respond to the project proposal.

“It’s frightening what has happened,” she said. “Here on this coast, we received no information…There’s been nothing in our two local daily newspapers.”

“There’s been nothing about the facility that’s going to go in at Woodfibre and yet we will be directly affected throughout this whole process.”

Anderson believes citizens along the proposed LNG tanker route have been dealt a similar hand.

If approved the project could carry 40 LNG tankers through Howe Sound each year. Woodfibre LNG states on its website that the particular site in Squamish was chosen for its “existing infrastructure and a welcome regulatory regime.”

The welcome might be too warm for some regional locals, however. Feeling rushed, Anderson requested the federal government extend the public comment period.

“Thousands of people around the Coastal area of Howe Sound will be directly affected, and deserved to be informed,” she wrote.

She told the Globe and Mail, “having this public comment period slated for over the holiday season, one wonders what’s going on.”

“So the project,” he continues, “on many fronts, looks like it could easily win support. Instead, the government has created a sense of unease by appearing to rush the process of public consultation.”

B.C. already boasts itself as a “future leader in natural gas supply and export” and promises major growth of an LNG industry providing thousands of new jobs for British Columbians. Christy Clark’s vision of B.C. has yet to come to fruition with no LNG export facilities currently under construction.

Perhaps the rush is merely to return the horse to the front of the cart.