With the far-reaching consequences of a new coal exporting port on the Fraser River, proper public consultation is a must, actvists and concerned citizens say. 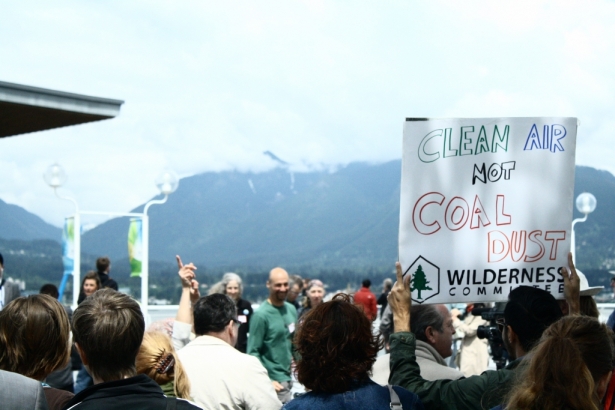 A large delegation of concerned citizens and activists rallied in front of the offices of the Vancouver Port Authority today to express dissent over plans to expand coal exports from the Fraser Valley.

The Port Authority has proposed the construction of a new port, which, alongside the Neptune Bulk Terminals, would max BC's coal export capacity out at around 59 million metric tonnes per year. The environmental consequences of such an increase would be enormous.

The Port Authority has stirred up opposition by failing to provide an effective means for the public to voice their concerns over issues such as environment and health. Two "open houses" are being held, a move which many amongst the delegation view as being completely insufficient.

"Open houses are a discredited form of public consultation. Communication is virtually all one-way, there is no opportunity to challenge decision makers," a letter from Voters Taking Action on Climate Change to the Port Authority reads.

One of the open-houses is being scheduled during the Hyack Festival, one of New Westminster's largest community events. Both are located in Surrey, making attendance difficult for those who hail from places like White Rock, or Delta.

Washbrook said residents in New Westminster, in particular, have demanded an open house in the city, but that their request has so far gone unanswered.

In the letter, delivered on Tuesday, VTACC member Kevin Washbrook requested a member of the Port Authority's Board of Directors to be present on Thursday in order to meet the delegation.

Of the roughly 100 people who showed up, some had travelled from as far as White Rock, Crescent Beach, and Vancouver Island. Representatives from nearly every area involved were present, as well as members of the Dogwood Initiative, the Wilderness Committee, and Kids for Climate Action.

Kids for Climate Action representative, Sam Harris, 16, related how his youth organization had organized a meeting last Tuesday with Port Authority representatives. It was then abruptly cancelled by the Authority, due to the fact that there was not enough "industry representation". 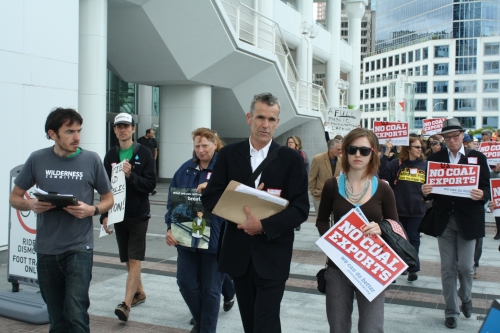 Washbrook led the delegation in delivering hundreds of letters of protest to the Port Authority's offices. They were met with two security guards and a company representative. No member of the Board was available to speak to them.