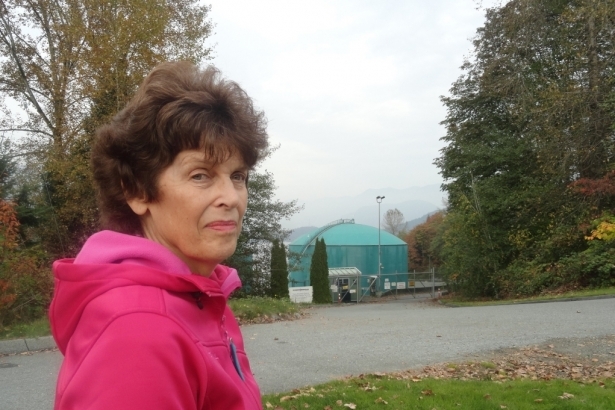 Mary Hatch, whose home was within the "red zone" of houses within the vicinity of the Trans Mountain pipeline spill in 2007, stands near the Kinder Morgan marine terminal. She is now an outspoken voice against Kinder Morgan's plans to twin the oil pipeline and increase tankers along the coast. Photo by Jenny Uechi.

Mary Hatch and Jan Walling, two retired schoolteachers, are taking a stroll through their Westridge neighbourhood in Burnaby. It's a serene space with tall green trees and a gorgeous view of the Burrard Inlet. Eagles, owls, bears and coyotes live in the nearby woods. It's hard to imagine that six years ago, this site was once devastated by an oil spill caused by a contractor who ruptured the Kinder Morgan Trans Mountain pipeline.

“This whole neighbourhood was blanketed by workers. It was like a war zone,” Hatch recalls, pointing to the sleepy-looking residential area right beside the water.  A blonde-haired jogger runs up to greet them. It's their neighbour, Laura Dean, who lives further down the road.

The three immediately start talking about the overpowering stench of oil in the neighbourhood during the last few weeks. It came from the nearby Kinder Morgan marine terminal, from which tankers transport an average of 81,000 barrels of Alberta bitumen to U.S. and Asian markets.

“I had to pull up my shirt like this,” Dean says, pulling her grey sweatshirt over her nose. “And run home, because I was going to be sick.”

When she complained to the Burnaby Environmental Service, they told her it wasn't bitumen, but rather jet fuel, she says. They roll their eyes and shake their heads.  “The smell was way too thick for jet fuel,” Deen grimaces. “You could almost taste it, it was so thick.”

As they walk further down the road, another neighbour greets them and asks if they saw the giant flares coming from the Chevron oil refinery, visible across the water. 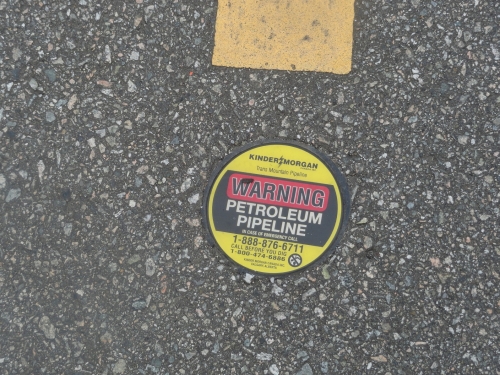 Conversations about oil are common for residents here these days. Burnaby is home to four major oil handling facilities – Kinder Morgan, Shell (Shellburn), Suncor and Chevron – and three of them are visible in the area. Tankers come so close to that residents can hear sound of anchors, of liquids pumping, and see the blinding beams of light from the ships flood into their kitchens.

Kinder Morgan and Shell have been in the area since the 1950s, so the odors and the noise are normal. But there's a point when it all becomes too much, like Kinder Morgan's  plan to twin the existing Trans Mountain pipeline and bring 890,000 barrels of bitumen from Alberta's oil sands through this neighbourhood to the coast.

Hatch, whose home was within the “red zone”,  100 metres from the 2007 Kinder Morgan pipeline spill, is actively campaigning to stop the expansion from being approved. Together with BROKE, a Burnaby resident's association opposing the expansion, Hatch actively helps organize meetings, information sessions, and rallies. She attends film screenings about oil, goes to town halls, talks with politicians, sells tickets for an upcoming fundraiser.

“It takes a toll on you,” Hatch says. “It starts to take over your whole life.”

But Hatch keeps going because she knows that Burnaby isn't ready to cope with a large bitumen spill. She certainly wasn't when the crude first landed on to her yard six years ago.