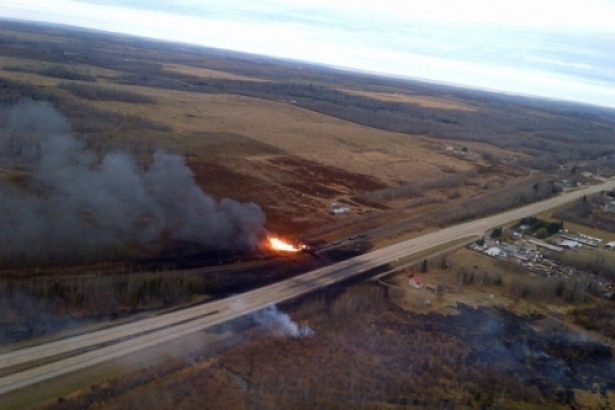 Photo of train derailment near Gainford, Alberta, via @CP_style

Another oil train derailment and explosion in Canada has sent nearby residents fleeing from their homes in the middle of the night. It happened at 1 a.m. on Saturday, October 19 on a CN Rail line outside the hamlet of Gainford, Alberta, 85 km west of Edmonton. The accident coincides with new steps by the Canadian government to extend oil and other resource extraction into the Arctic.

A portion of a long, mixed-cargo CN Rail train traveling westbound derailed. Nine of the derailed wagons were carrying liquid petroleum gas (propane) and four contained crude oil. Three of the propane wagons exploded into flames. A fourth was breached. The accident closed the adjoining Trans Canada Highway for days. Fortunately, no lives were lost or serious injuries sustained in the conflagration.

The 125 residents of Gainford were evacuated from their homes and a state of emergency was declared in the surrounding area. Some residents evacuated their homes with only the sleeping clothes they were wearing. A CBC News report provided home video footage of the fire burning soon after the derailment.

Gainford resident Denise Anderson said her family received notice to leave at 3 a.m. “Two fire and rescue guys came and banged on the door and [they] tell me I had to evacuate because there was a train derailment,” she said. “They told me to get dressed and I had to go.”

Taxidermist Jeanette Hall lives right across the highway from the derailment and she told CBC News, “I woke up to something that sounded like an airplane landing on Highway 16 and the next thing you know you hear the boom-boom-boom of the train falling apart.”

“Everything lit up. Next thing you know, the curtains melted to the window and we took off running downstairs. I thought ‘we gotta get to the basement – everything’s gonna blow up’ – and then we happened to look outside and the entire front yard is on fire.”

“We should have died in that. And we didn’t. I can’t explain how the house and everything didn’t get burned down,” she said. “It was hell. It was absolute, utter hell.”

The evacuation lasted four days because the fires consuming the three propane wagons could not be safely extinguished. Emergency officials and local firefighters, the latter equipped with little more than water hoses, decided to leave the wagons to burn. The danger of the six other propane wagons exploding was settled by a combination of venting the fuel and setting explosive charges to set them on fire.

CN managed to drag the four oil wagons away from the fire. The worst damage to nearby homes was the melting of vinyl siding.

This accident happened on the main CN Rail line that connects western Canada to the British Columbia coast at Prince Rupert and Vancouver. It wasn’t supposed to be possible. CN says the line receives the very best inspections and preventive maintenance that it can provide, including ultrasonic examination of the rail, visual inspection of the rail bed and visual and electronic surveillance of the moving train. The train was inspected upon leaving Edmonton and was traveling at 35 km/hr.

One local resident told CBC that he and his neighbours believe the stretch of rail bed in the area is inherently unsafe because it was laid overtop of a bog.

This was the third train derailment in western Canada in as many weeks. Just two days prior, four CN rail wagons carrying anhydrous ammonia left the rails in Sexsmith, Alberta, forcing residents from their homes. In Landis, Saskatchewan, 17 CN rail wagons derailed on Sept. 25. Three were carrying lubricating oil and one carried ethanol. Authorities rushed to evacuate a nearby primary school.

Just down the Trans Canada highway from Gainford is the site of an infamous CN derailment in 2005 that dumped 700,000 liters of Bunker C fuel and 88,000 liters of pole-treating oil into and around Wabamun Lake. A Transportation Safety Board investigation found that the train derailed when the rail beneath it broke due to defects. CN pleaded guilty to three charges under provincial and federal environmental legislation and was fined $1.4 million.