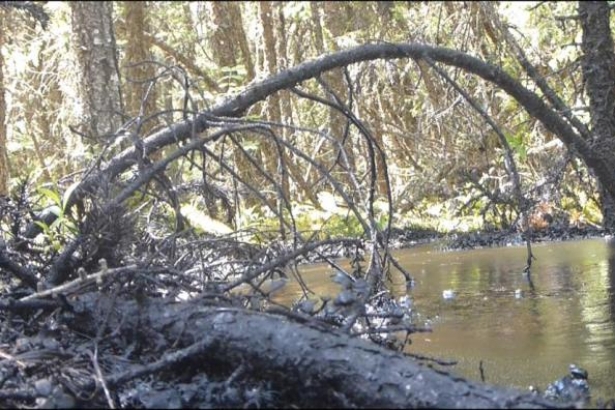 An image of pooling bitumen emulsion on the Cold Lake Air Weapons Range, courtesy of Emma Pullman and CNRL.

Canadian Natural Resource Limited (CNRL), the company responsible for a massive ongoing spill on the Cold Lake Air Weapons Range southeast of Fort McMurray released a public notice last week claiming the release was “secured” and that “clean-up, recovery and reclamation activities are well under way.”

Cara Tobin, Office of Public Affairs spokesperson for the Alberta Energy Regulator, said that CNRL has yet to bring the release under control.

The spill, caused by a rare underground spring of bitumen emulsion, is the result of High-Pressure Cyclic Steam Stimulation (HPCSS) technology that forces steam into underlying bitumen reservoirs at temperatures and pressures high enough to fracture underlying formations.

“I don’t want to presume what they mean by [secure] but I can tell you a few things that might help clarify,” she said.

Under usual circumstances with HPCSS heavy bitumen is softened by steam injected under the surface, allowing the resulting water and oil mixture – called bitumen emulsion – to surface up a wellbore.

In this instance the high pressures underground are creating multiple bitumen springs, forcing the oil mixture to the surface in numerous locations including under a body of water.

“With any incident the company would go to the site and identify the outer boundaries of the affected area,” Tobin said.

“So that’s one thing. And that’s basically containment…In this case, this is still an ongoing incident. There is no control on this incident.”

According to CNRL the area of initial impact is 20.7 hectares, or just over 51 acres. The spill volume to date, initially reported at 28 cubic metres, was updated to 950 cubic metres, or nearly 6000 barrels of oil, over the weekend.

She added that although this spill is “relatively unique,” an incident of its kind occurred previously on the same CNRL site.

“It’s not like it hasn’t happened before though. We have information on our website, about a similar incident that happened in 2009 and it was the same sort of thing where pressure pushed bitumen to surface and until that pressure was naturally able to recede underground the product continued to – very slowly – come to surface.”

Much like the 2009 incident, the cause of the current spill remains unknown and it is not expected to stop until underground pressure subsides.

“What we’re seeing in this one is that pressure has built up underground and is finding ways to come to surface and we don’t know what the cause of that might be. That will come out in our investigation report. But regardless, it is coming to the surface, very slowly, and it won’t stop until that pressure has gone down underground,” Tobin said.

The rate of the spill remains unreported at this time.

According to documents from the former Alberta Energy Conservation Board (ERCB), now the Alberta Energy Regulator (AER), the 2009 release prompted the shut down of the site after bitumen emulsion was seen flowing out from the ground and pooling on the company’s Primrose East site.

A report on the incident says the bitumen emulsion could be observed seeping out of the ground to the south and the east of the well pad, as well as from surface fissures in the area.

The company initiated “emergency flowback to depressurize the formation” in an attempt to stem the release.

“Approximately 11,380 tonnes of solids (including snow, organic material, soil, and bitumen) was ultimately removed from the site for landfill disposal, and 904 cubic metres of bitumen was recovered from the surface of Pad 74 and transported to CNRL’s Wolf Lake Plant,” states the report.

Multiple investigations into the incident over the span of one year were inconclusive and could not ultimately determine how the bitumen emulsion made its way to the surface. The ERCB cited pre-existing unground fractures or a wellbore breach as possible explanations.

In its final summary the ERCB stated “a contributing factor in the release may have been geological weaknesses in combination with stresses induced by high-pressure steam injection.”

HPCSS creates fractures in underground formations to separate bitumen from sand. An AER incident report on the current CNRL release in Cold Lake describes HPCSS as a high-pressure steam injection method that fractures the reservoir to “create cracks and openings through which the bitumen can flow back into the steam-injector wells.”

This story was first reported in DeSmogBlog.