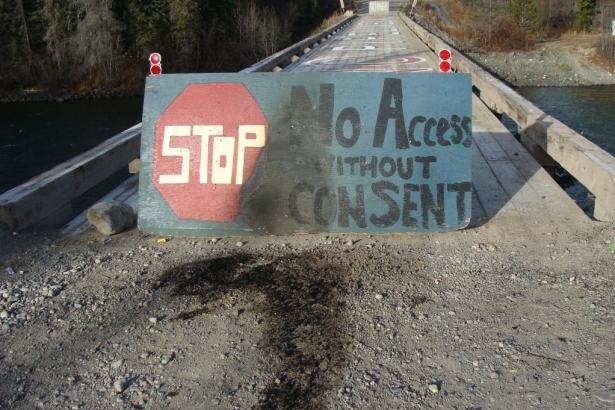 Trail of the accelerator that was set off last night that burnt the sign set up by the Unist'ot'en Camp. Photo from Unist'ot'en Facebook page.

A warning sign set up by Unist'ot'en leaders on their land, near Houston, a forestry and mining town in the northern interior of B.C., has apparently been torched by a makeshift bomb. The sign, which reads  "Stop: No access without consent," lit up around 10:20 p.m. last night.

Hereditary Likhts’amisyu chief Toghestiy, together with his wife, Freda Huson, the spokesperson for the Unist'ot'en Clan, set up a roadblock against the proposed Northern Gateway's Pacific Trail Pipeline.

Their clans, together with the Git'dum'den, are three out of five Wet’suwet’en First Nation clans that built cabins last year as a permanent defense camp against the pipeline and mining projects. The $1-billion pipeline project would deliver natural gas from northern B.C. and Alberta to Kitimat for shipment overseas. The pipeline is slated to pass through Wet'suwet'en land.

The group, called the Unist'ot'en Camp, includes the three clans and their supporters. They have booted out surveyor workers with Apache's Pacific Trails Pipeline several times over the last four years, as they have documented here.

Last year, the group built a cabin as a permanent camp.They have been living in it since July.

Monday night, their resistance was tested. Initially, the group thought the blasting sound they heard came from the sci-fi film they were watching.

But then the ground shook. 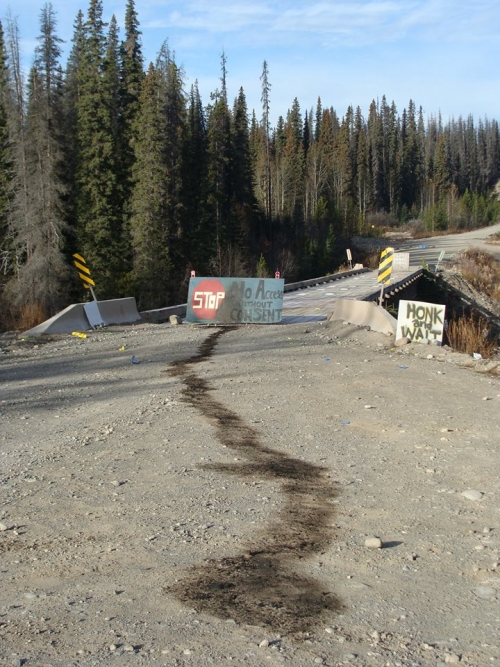 "There were concussions from the explosive device that you can feel inside the cabin,” Toghestiy said.

He immediately shut off the generator.

“We had to be really cautious and exited in small groups and worked our way towards the main road," Toghestiy said.

He shot a bullet from his rifle into the air as a warning, “to let them know we wouldn’t idly sit by and let someone threaten us,” Toghestiy said.

The headlights of a vehicle then lit up, moving away from the scene.

The group walked slowly, without flashlights or headlamps, towards the small flames burning the sign they set up.

By the time they got to the area, the fire burnt off. All that was left behind were remnants of the accelerator – a blue, green and yellow container, surveyor tape, and a trail of fuel that led up to the sign, Toghestiy said.

"It could be anybody. We don't know if they are people who work for a company, a group of hunters," said Toghestiy.

Toghestiy would not disclose how many people were in the cabin Monday night. However, around four to twenty people live in it at any given time, he said. 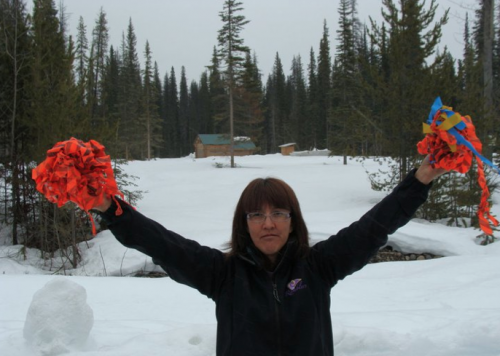 Freda Huson in front of the cabin the Unist'ot'en Camp completed building this summer. Photo from unistotencamp.wordpress.com

Volunteers built the cabin right beside the Morice River, or what they call the Wedzin Kwah.

The group chose the spot because it lies right on the GPS line of the Pacific Trails Pipeline, according to its description on the crowd-sourcing website, Indiegogo in January.

"It's one of the last purely clean waters we still have," Huson said.

The group have reinstated a traditional protocol, wherein visitors who want to enter to their land have to answer questions such as "where are you from, why are you here," Huson said. If the clan is unsatisfied with the responses, the visitors are turned away.

One hunter from Tumbler Ridge who was allowed into the area told Huson that he overheard a group of hunters saying they disagreed with the protocol.

"Two weeks ago somebody destroyed our (other) sign, some people who honked their horn and rubbed their engine,” she said.  The hunter told her that group went to the RCMP alleging the group did not let them in, Huson said.

She said that the people who destroyed their warning sign they had 44 km west of the Forest Service Road might be the same people who burnt their sign last night, which is 66 km from the town of Houston, B.C.

But the makeshift explosion did not quench the couple's fire to ignite change in the Aboriginal community.

"We don't get scared that easily. We got a lot of training under our belt .... dealing with non-violent direct actions...we are comfortable with where we are right now," Toghestiy said. 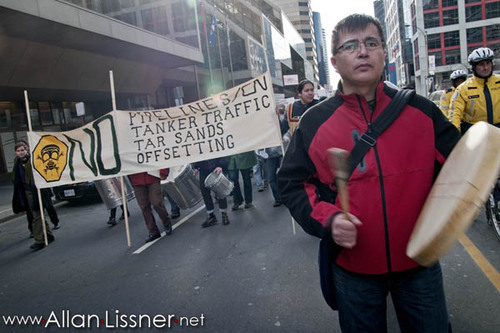 Huson said that a government tactic she heard of to stop the camp was to label them as terrorists.

"We don't have money to fight these industries. (Corporations) trample over us and our rights,” she said.

But the group has found both traditional and modern ways to fight the pipelines and any tar sands projects connected to their land.

They hunt moose and preserve berries for the winter. They also use several social media sites to get the word out on their resistance.

The group raised $10,802 through their Indiegogo campaign to feed and support the clan members and volunteers living in the cabin.

“The whole world has to know we have used all sorts of internet tools to fight this,” Huson said.

When Toghestiy documented the remnants of the fire on a Youtube video, he reiterated how vigilant the group is. He the called the alleged culprits cowards, "who don't understand that they've grown up racist.

"But fortunately for us, we're wide awake and we know what's going on."