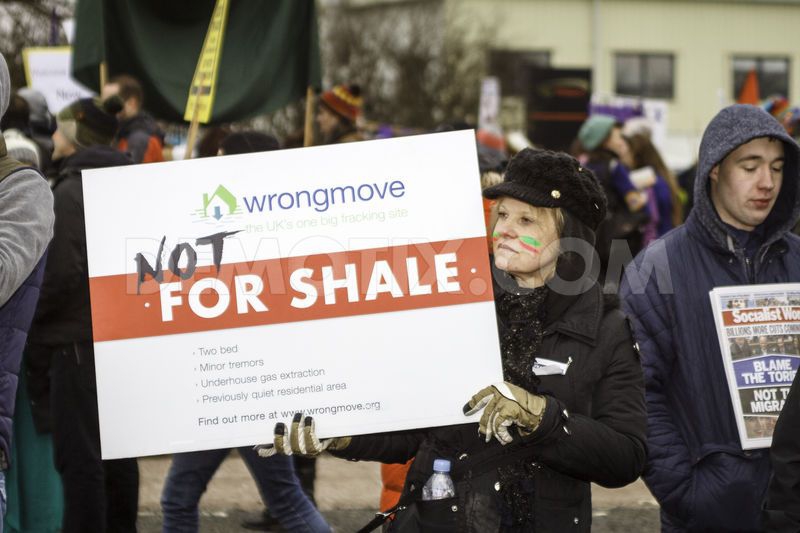 Anti-fracking protesters on the march in Salford. (Photograph: Steven Purcell/Corbis)

Signals that British Prime Minister David Cameron is about to go "all in for for shale" are dovetailing with moves by some of the world's largest fossil fuel companies who see enormous profit-making opportunities if the UK government can overcome local and grassroots  opposition to the fledgling fracking industry in the country.

Cameron's latest comments on the controversial gas drilling technique come with the announcement of a new plan that opponents to fracking call "bribery" that would see local government councils receive large financial incentives if they help approve proposed projects in their area.

Previewing a speech Cameron is expected to deliver Monday, the Guardian reports:

The prime minister will make a new pitch to shore up support for fracking amid concerns about the use of high-pressure water and chemicals to fracture underground rock, thereby releasing trapped gas. New fracking sites have opened up in the Midlands, Cumbria and Wales.

Cameron, who is to visit a fracking site, will announce that the government is to double from 50% to 100% the amount that councils in England can keep in business rates raised from shale gas sites. The offer, which was proposed last year by the Institute of Directors, could be worth up to £1.7m a year for a typical site.

The prime minister will also try to reach out to concerned local communities by saying that the industry will consult on how to distribute funds of up to £5m-£10m for a typical site over its lifetime – a lump sum of £100,000 when a test well is fracked, plus 1% of revenues. Direct cash payments could be made to homeowners living near fracking sites.

Cameron will say: "A key part of our long-term economic plan to secure Britain's future is to back businesses with better infrastructure. That's why we're going all out for shale. It will mean more jobs and opportunities for people, and economic security for our country."

But Jane Thomas, senior campaigner at Friends of the Earth, blasted the new approach.

"Today's announcement from the government that councils can keep all the business rate revenue they receive from fracking companies marks a new low in the government's attempts to curry fracking favour with local people," said Thomas.

She continued by arguing that incentivizing local governments with fracking profits was a nefarious precedent to set: "These community sweeteners raise huge concerns about conflicts of interest if those councils who potentially will benefit from this money are also the ones who determine the planning applications from fracking companies in the first place."

Throughout 2013, anti-fracking campaigners in several communities targeted gas drilling test sites with protests in order to prevent the gas companies from establishing a foothold in the UK. Unlike in the US, where a fracking boom has unleashed a torrent of greenhouse gas pollution and water contamination, the fracking industry in the UK remains in its infancy stage.

But as the Guardian report adds, large industry players such as French company Total and US-based Chevron, are lining up with interest over the UK's untapped shale gas deposits.

As Greenpeace climate campaigner Lawrence Carter told the Guardian for a separate article: "Total, a French company who can't frack in their own country because the French government has stopped the French countryside being ripped up, have now turned their sights on the UK countryside, where the UK government seem happy to allow the industrialisation of our green and pleasant land. The UK government seem deaf to the risks fracking poses to our environment and local communities and are pushing ahead with selling off two-thirds of Britain for drilling without a public mandate."