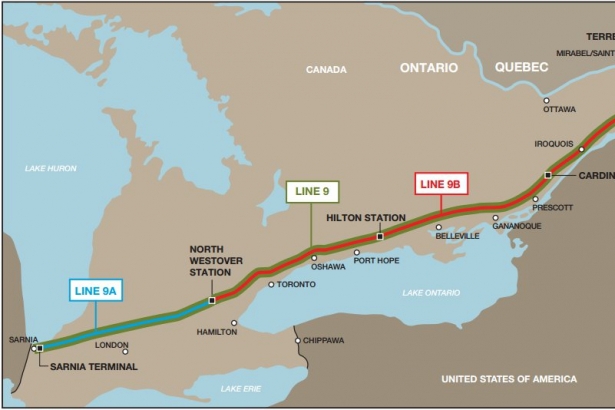 Map of line Enbridge 9B

ForestEthics Advocacy and Donna Sinclair filed a lawsuit today against the federal government over new rules that severely restrict the ability of Canadians to have a say about proposed energy projects.

As a result of new NEB rule changes, people wishing to speak at the Enbridge Line 9B pipeline hearings are required to fill out a nine-page questionnaire before being allowed to submit a letter for comment, and NEB reserves the right to reject any applicant it believes is not directly impacted by the pipeline. ForestEthics Advocacy lawyer Clayton Ruby argues that the new rules created under omnibus Bill C-38 violate rights of Canadians to speak out about issues that affect them.

"This is not a lawsuit about people opposed to the pipelines. It's about democracy," ForestEthics board member Tzeporah Berman said. "The government has gone too far."

"They're restricting the content of what Canadians can talk about as well as who can participate in a process that we all fund as taxpayers. This lawsuit is about protecting Canadians' right to free speech."

It's worth noting that before the new rules took effect, the Northern Gateway hearings had 1,544 public speakers, compared to the 9B hearings ,in which just 175 speakers were approved. Did the Enbridge Northern Gateway pipeline proposal's hearings inspire the NEB rule changes?

"It's a result of the Enbridge Northern Gateway hearings in British Columbia," Berman said.  "They restricted public participation in future hearings in a number of different ways, by shortening the timeline that people can participate: at the Enbridge Northern Gateway hearings, people had a 148 days before participation was closed for comment. In Line 9, it was 19 days.

"With Enbridge Northern Gateway, they didn't like the public scrutiny and the lack of social license that resulted, and that's why they restricted the process."

"When you look at all the changes made by the Harper government, it seems hard to see it any other way," said ForestEthics campaigner Ben West. "They  are bending over backward to do everything the industry wants to help get these pipelines approved."

A recent Globe and Mail article noted that Northern Gateway "lost its way" after "local qualms blossomed into broad opposition", suggesting that Enbridge's case got weaker as it failed to build relationships with Aboriginals and northern BC communities. These came to a head in the JRP hearings, as speaker after speaker voiced their opposition to the pipeline, with some communities like Smithers unanimously speaking against the project at the hearings.

Natural Resources Minister Joe Oliver sharply criticized speakers at the Northern Gateway hearings during a debate in April, saying that they were "there to repeat the same canned message" and "undermine the process". He argued that people who signed up to speak were "gaming the system", as opposed to taking part in a straight-up democratic process.

West finds Oliver's comments "interesting", given that speakers at the JRP hearings often had many different perspectives on the pipeline.

"If you actually looked at the transcripts of what people said, it was far from a repeated message," he said. "In fact, there was a lot of diversity in terms of how people were expressing themselves.

"It's interesting to hear that from a government that is so controlled with their talking points and messaging. We've heard from Conservative backbenchers in the government who are frustrated with the Harper government for it limiting their ability to speak on government issues."

While oil pipelines have been a key focus of the debate, the NEB also regulates the oil, gas and electricity industries, as well as coal, liquified natural gas and tar sands development. ForestEthics argues that under the new rules, many Canadians who would have been able to participate before are now blocked from voicing their opinion.

“Through legislative changes snuck into last year’s Omnibus Budget Bill C-38, the Conservative government has undermined the democratic rights of all Canadians to speak to the issues that impact them,” Ruby said in a press release.

“Right now, they cannot question the development of the tar sands itself. We're challenging the legislation and the NEB’s new rules because they violate fundamental free speech guarantees enshrined in the Canadian Charter of Rights and Freedoms.”