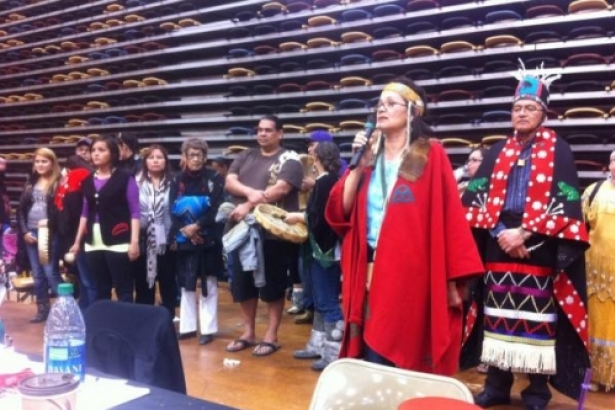 May 2012 photo of Yinka Dene Alliance

Geraldine Thomas-Flurer, a spokesperson for the Yinka Dene Alliance, vowed today to fight the BC government's moves toward granting Enbridge temporary land use permits to cut trees to gather data for the Northern Gateway pipeline, even before the pipeline has been approved.

Thomas-Flurer of the Saik'uz First Nation decried the absence of what she called "proper consultation" by the Province.

“There's no way that the Yinka Dene Alliance is going to allow this to happen...we've put up signage on our territories and we're going to be practicing our Aboriginal rights, which we've practiced for a millennium. We're going to stop the people who are on the land who think they can just go out and act on temporary permits."

"We don't want the Province to approve any permits or do anything to advance the proposed Northern Gateway pipeline," she added.  "The Yinka Dene Alliance has said that we are going to be the wall that Enbridge has to go through, and we are adamant about that."

If the permits for the Nak'azdli First Nations territories are approved, they would allow Enbridge to undertake short-term occupation of the lands, construction of temporary access trails and removal of timber from the trails and occupation sites.

"The purpose of the program is to gather geotechnical data required to inform the design of the proposed pipeline," responded Ministry of Forests, Lands and Natural Resource Operation public officer Brennan Clarke in an email, relaying comments made on behalf of the ministry. He noted that Northern Gateway began efforts to engage First Nations in January 2013, and that the Saik'uz First Nations' traditional territory is not among the 33 sites affected by the survey.

Thomas-Flurer said that First Nations in BC were hunting, gathering and fishing on the land during this season, and that it would not allow any activity that would compromise these activities as the tar sands development did to Albertan First Nations.

The Yinka Dene Alliance of First Nations issued a cease and desist letter to Enbridge in June against any any surveying of the Nak'azdli First Nations' land, saying that it would be viewed as trespassing. She said the public will be made aware if Enbridge began surveying the land based on permits that were not approved by the chiefs.

"We don't own these lands. We have to take care of these lands for future generations. This is a responsibility we have as First Nations people and we take that very seriously.The world is watching. The United Nations is watching. People have to be mindful of that," Thomas-Flurer said.

The Saik'uz Nation, whose territory is near Vanderhoof, British Columbia, the Nak'azdli who are near Fort St. James, the Nadleh Whut'en near Fort Fraser and other First Nations affected by the pipeline have received up to hundred-page long referrals from Enbridge for "investigative field work activities" relating to Northern Gateway.

While the Province hasn't explicitly given permission to Enbridge, a recent letter implies that Enbridge could be allowed to proceed if the First Nations involved don't make their way through the documents and respond by a certain date.

"We're extremely disappointed that the Province has elected to refer the development applications for the project on a piecemeal basis that does not allow for any consideration of the real concerns in relation to the larger project," Thomas-Flurer said.

Letter to "proceed to a decision" about temporary land use permits

News of the threat of logging to make way for the proposed Northern Gateway pipeline reached the Nak'azdli First Nation last week via a letter from the government notifying them of an intent to "proceed to a decision" about controversial temporary land use permits given to Enbridge.

The letter, dated July 23, demanded a response by 3 p.m., July 26. It noted in the first paragraph that the Province did reject the Northern Gateway proposal.  Then it went on to say that "given the uncertainty of the outcome of the federal review and decision making process, the Province is of the view that it is appropriate to limit the scope of consultation to the impacts of the Temporary use Permits."

But the Yinka Dene Alliance say consultation has been sorely inadequate. They say the BC government seems to treat the land use requests as being separate from Northern Gateway, when in fact the field work is part of the proposed pipeline.

"The province keeps treating this as if it's two separate issues, which is ridiculous," Brenda Belak of West Coast Environmental Law said.

"It's really obfuscation. There has been no decision on from the JRP yet.  If Enbridge is submitting further information, everyone should be able to see and respond to it, otherwise the process is not fair.  In fact, what they appear to be doing is proceeding with preparations for the pipeline before there has been an approval.”

Belak and Thomas-Flurer both said that under section 35 of the Constitution, the Canadian government has a duty to respect Aboriginal rights of First Nations affected by permits such as these.

Although they have requested to meet with the Premier before any permits are granted, no meeting has been scheduled to date and as of publication.

When contacted by The Vancouver Observer for a response to this article, a Ministry of Forests, Lands and Natural Resource Operation, representative wrote in an email:

"Consultation does not imply veto power."

Below, the letter (PDF available here): 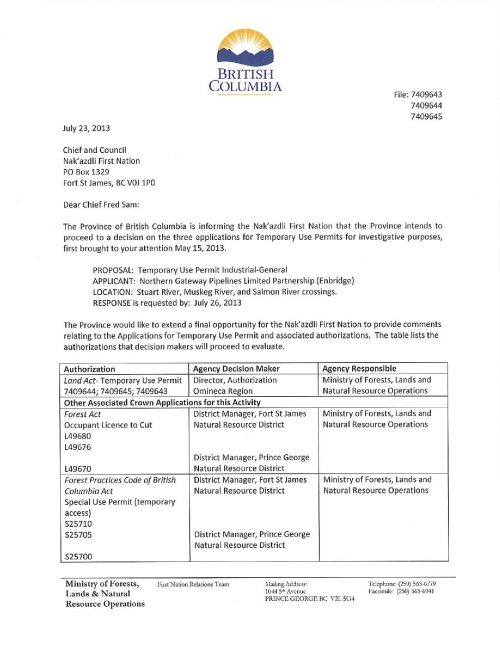 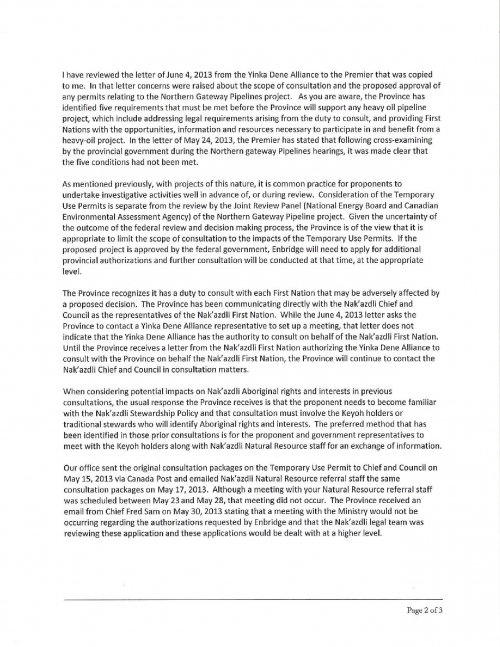 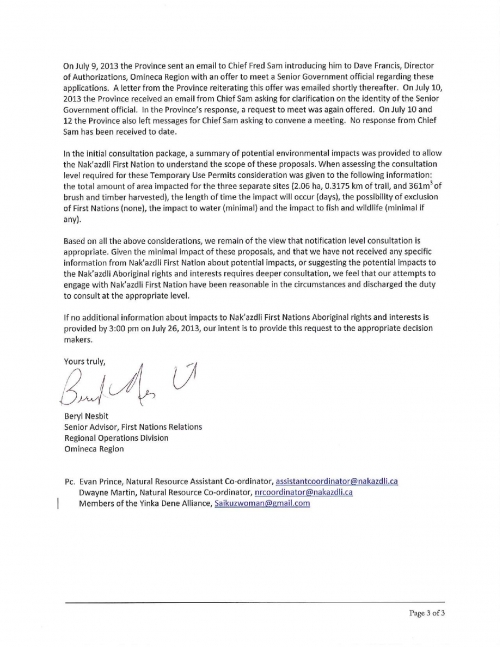