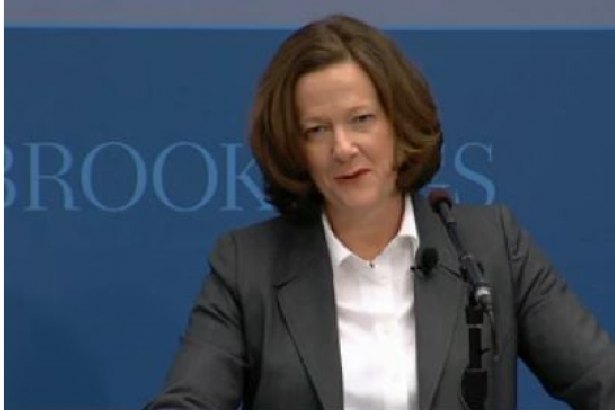 She falters, for one brief but telling moment, while plugging the Keystone XL pipeline at the Brookings Institution in Washington.

Despite the protest signs, Alberta Premier Alison Redford holds things together with a brave face, talking with gusto about how the highly contested pipeline that would pump Canada's oil sands to refineries in Texas will boost America's economy. It will bring jobs to American people, she goes on, in a steady voice, plus "direct and tangible rewards." She avoids the topic of First Nations activists, who are organizing against the project as she speaks.

Then comes the question.

Redford's host notes that according to the U.S. State Department, the controversial pipeline linking Alberta's oil sands to refineries in Texas would only generate 35 permanent jobs – a far cry from the 75,000 jobs touted earlier by the Premier.

"Have the economic benefits of Keystone been exaggerated?" he asks.

Redford leaps to defend Keystone XL. That figure only refers to the pipeline control room jobs, she says. There will be construction jobs once the project is approved. She wonders whether the real number isn't in fact 100 jobs.  Alberta is flourishing thanks to its oil and energy-based economy, she soldiers on, now sounding completely awkward, given the headlines back home that her province is now in its fifth consecutive deficit year, with a $4.3 billion shortfall.

This was Redford's  fourth trip in 18 months to the U.S., this time accompanied by Environment Minister Peter Kent, apparently aimed to influence  Congress and Obama as they wrangle over whether or not to approve the Canada-Nebraska leg of TransCanada's proposed pipeline. The pipeline would bring oil from Bruderheim, Alberta, to refineries in Houston, Texas.

The $5.3 billion project is in a 45-day public comment period running through April 22. Then the administration will have 90 days to decide whether or not to approve Keystone XL.

But for all of the extra effort the Premier is making to convince the U.S. to green-light the pipeline, Canadian Business magazine said Redford  “missed an opportunity” at Brookings and “fail[ed] to make the economic case for Keystone”, and left many unconvinced.

Redford's trip took place at a bad time for the oil industry. Since March 30, major oil spills in Arkansas and Texas provided an ominous backdrop to her Keystone tour, with images of oil-soaked streets appearing on the news.

Then, almost right after she returned, the news broke that Natural Resources Minister Joe Oliver had told La Presse newspaper during an editorial board meeting that he believed the fears of climate change had been "exaggerated" and that "people aren't as as worried as they were before about global warming of two degrees".

Although he backtracked and said he had been misunderstood, Oliver's comments put deep cracks in the narrative presented by Redford and Kent in the U.S., that Canada was taking climate change very seriously and working hard to reduce greenhouse-gas emissions. Just how serious could Canada's government be about climate change and sustainability, if key cabinet ministers like Oliver were telling the world that it wasn't even a big concern?

A chorus of opposition from First Nations leaders

Opposition to Keystone XL and the oil sands isn't universal among First Nations groups, but is widespread. Many are alarmed and angry at the Harper government's attempts to undermine Aboriginal rights and title to land through Bill C-45, passed last year. Today, pipeline protests is a highly coordinated effort: this January, Aboriginal leaders from both sides of the border have united to oppose the Keystone XL pipeline, forming the treaty to  Protect the Sacred in January.