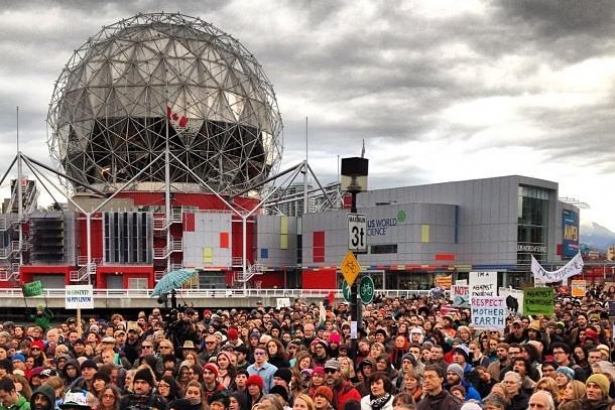 The National Energy Board issued a report recommending the approval of the controversial Enbridge Northern Gateway pipeline today at a media lock-up event in Calgary. The pipeline was approved with 209 conditions.

The 1,177-kilometre pipeline would bring tar sands bitumen from Alberta to Kitimat, BC, for shipment to Asian and U.S. markets. It has been fiercely opposed by Northern BC residents and a coalition of over 130 First Nations.

"Now that we have received the report, we will thoroughly review it, consult with affected Aboriginal groups and then make our decision...Our Government will continue to improve the safe transportation of energy products across Canada. No project will be approved unless it is safe for Canadians and safe for the environment."

"It will trigger a nasty backlash," said Grand Chief Stewart Phillip, president of of the Union of British Columbia Indian Chiefs, who viewed the decision as "the death of the integrity with respect to the JRP and environmental review processes in the country."

"There will be a multitude of lawsuits, protests, demonstrations, marches and at the end, if the company goes for site preparation, people will be physically out there confronting bulldozers."

Although the decision has shocked the large number of BC residents who opposed Enbridge's proposal, many suspected that the NEB would approve it after the federal oversight group announced that it would make the decision in Calgary.

"We know that this whole JRP process has been undemocratic. With reports that the NEB coordinating spying on ordinary citizens who are participating in the democratic discussions and making their voice heard, we've known that they're siding with industry on this," said North Coast MLA Jen Rice, who represents constituents in Prince Rupert.

"What this shows is that Prime Minister Stephen Harper is autocratic," she said.

When asked if the energy industry had any influence on the JRP in its final report, NEB spokesperson Sarah Kylie replied, "absolutely not."

She said the NEB could not respond to specific questions about the JRP's views expressed in the report.

"As part of our commitment to natural justice, a panel cannot provide one individual or group with additional information that is not provided to all parties," she said. "The Panel’s recommendation report includes their recommendation and the reasons behind them. The report speaks for itself."

At the federal level, NDP and Green party strongly criticized the decision. Federal NDP minister Thomas Mulcair slammed the idea of tankers through the Douglas Channel as "madness".

“We have been very clear: New Democrats stand with British Columbians and oppose the Northern Gateway project because it puts our jobs and our BC coastline at risk," NDP MP Peter Julian said.
"This pipeline would threaten existing industries, and even a modest spill will contaminate this pristine coastline for decades—ravaging tourism and the salmon fishery. The risks are simply unacceptable.”
"I'd like to know the economic analysis of the Northern Gateway project, which no one has done," federal Green leader Elizabeth May said.
"The logic of shipping dilutent from the BC coast to Alberta, to then add it to raw crude, only to ship back to the coast doesn't make sense."
"Great news for BC", some in business community say
“This is great news for BC. It means that this pivotal, job-creating project has been examined from every angle and found sound,” said John Winter, president and CEO of the BC Chamber of Commerce.
The BC Chamber of Commerce had released a poll earlier this month, showing favorable opinions of the Northern Gateway pipeline among British Columbians.

“With this decision, British Columbians can confidently back this project, knowing that it meets our top-tier environmental and community standards.”
The pipeline project is expected to create around 560 long-term jobs in British Columbia.
Economist and former ICBC CEO Robyn Allan, who has extensively criticized the economics of exporting raw bitumen, said the JRP appears not to have heard British Columbians in the hearings.
"The Panel apparently did not listen to the thousands of people who took the time and effort to make oral and written comments against a project," she said.
"They did this because what the project threatens is of vital importance to them...But what is most regrettable is the role the provincial government has played in this process and how it has not ensured the BC public interest is protected.  Unfortunately, the province registered as an Intervenor and not a Government Participant as Alberta saw fit to do. So despite the power of the  final argument, and firm stand against the project, it appears the Panel discounted the province's position as well."

Doubts over safety and accountability

The project was broadly opposed throughout BC during the Joint Review Panel hearings. Of over 1,000 speakers who presented at the hearings and 9,000 letters submitted, the majority were against the pipeline. Some communities near the pipeline route, such as Smithers and Burns Lake expressed 100 per cent opposition to the project, with mayors speaking out strongly against the project.

BC Premier Christy Clark went as far as to reject the project in May, saying that Enbridge did not fulfill the requirements needed to operate in British Columbia. She also warned last October that BC was "unprepared" to deal with an oil tanker spill off the coast.

Harper government's spy coordinators have some 'splaining to do