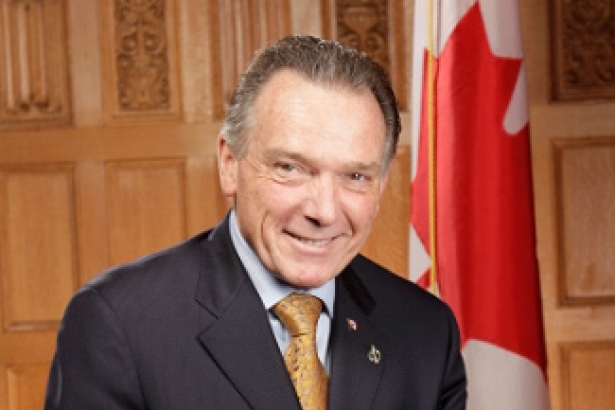 Monday morning, Canada's Environment Minister, the Honourable Peter Kent, will address the delegates attending the opening of the 2013 Joint Scientific Congress in Saskatoon. The irony of this was not lost on one observer who, in mailing around the media alert about Kent's appearance wrote:  "Pity the poor sci-delegates who have the unbearable task of being polite to Harper's Chief Climate Change Denialist."

The Harper government is famous for repressing many democratic rights, and silencing its critics.  Foremost among those silenced have been scientists. And leading the attack on the facts that scientists produce has been Minister Kent.

Kent circa 1984: concerned about climate change

Kent was once a journalist, and an excellent one.  And far from finding as a reporter that climate change had no basis in scientific fact, he once called global warming "the world's greatest environmental concern."

The program was hosted, narrated and written by Kent, and was one of the first major media reports on the warming trend in global climate.

Over three decades ago, long before most Canadians, Peter Kent – who had already distinguished himself internationally as a journalist and broadcaster – recognized that an environmental issue like global climate change was upon us, and was to be a critical determinant of human survival.

In March, Minister Kent appeared before the House of Commons Environment Committee and stated:

"Our actions, combined with provincial, territorial and business efforts, are projected to bring Canada halfway to achieving our Copenhagen target of a 17 per cent reduction [in carbon emissions] from 2005 levels by 2020, and moving forward we're working towards achieving additional reductions from other sectors of the economy, focusing now on the oil and gas sector."

Now the journalist is part of Canada's national leadership. Now the reporter is finally getting a chance be part of history, instead of just watching it happen and describing it to others. Now he can actually do something about "the world's greatest environmental concern."

But that's not what's happening. Observers have pointed out that steps taken by Canadian provinces, coupled with the global recession of 2008 and a significant change in international greenhouse gas accounting rules, have actually been the major contributors to reducing Canada's impact on global climate change.

The federal government, despite its rhetorical claims otherwise, has actually obstructed progress in this area.

To be more specific, the federal government, with the full participation and support of Minister Kent, has backed out of the Kyoto Protocol, a weak international agreement on reducing "greenhouse gas" production, but at least an actual agreement. In its place, Canada – and Kent – has been aggressively promoting development of the oil (tar) sands, one of the planet's biggest single contributors to "the greenhouse effect".

Furthermore, the Harper government has embarked on a process of actively suppressing cautionary environmental science by shutting down scientific or other bodies that produce it such as:

Indeed, the federal government has just spent $5 million on scrutinizing all charitable organizations that, among other things, advocate environmental considerations in political decision-making (and found only one that was), and has promised to spend $3 million more on this task. All that while cutting back longstanding legal protections for Canada's lakes, rivers and oceans.

In fact, Minister Kent is now a spokeman for one of the most regressive governments in modern times with respect to environmental concerns.

But that's not all.