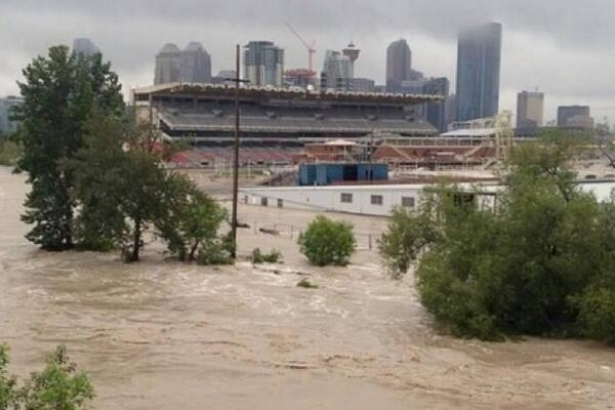 “The issue of climate change is tough, because you can't necessarily link a weather episode to it and ask, 'Hey, is that coming out of our tailpipes and smokestacks?'” Environment Canada climate scientist David Phillips said.

Phillips described the extraordinary 190 millimetre downpour over 60 hours in Calgary as being the straw that broke the camel's back after the area had already seen heavy rain and snow melts earlier in the spring.

"It's like taking a sopping wet sponge and squeezing out all the moisture and it just rained on a community that had a lots of rain in May. So the rivers were already primed, the ground was already saturated, and it couldn't take any more," he said.

Phillips said it is also important thing to consider was how much the land use had changed over the years: if the same situation happened 100 years ago in the countryside, the damage would have been less dramatic than it was in a city like Calgary, where the lack of vegetation made it poorly equipped to handle such extreme rainfall.

Climate specialist Guy Dauncey agreed that "extreme events always happen" and that climate change can't always be a factor, but noted that their frequency was becoming higher.

“If you look at the statistical likelihood of what's called '100-year-events' ... they're happening more like every 10 years," he said.

Dauncey referenced climate scientist James Hansen, who compared climate change to 'loading the dice' so that instead of an even mix of cold, average and warm summer temperatures, people would be much more likely to end up with warm and hot summers.

"And you can point to the way in which the melting Arctic is causing a larger polar high, which affects the jet stream, and the jet stream doesn't flow regularly anymore," he said. "They get stuck sometimes so it will stay in place. Rain will just stay in one place instead of just moving on." 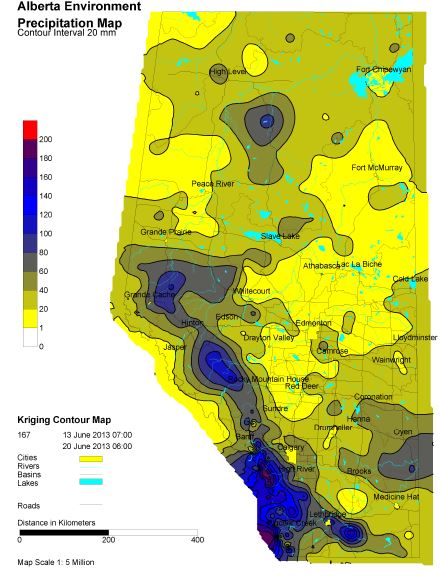 A storm that stays...and stays

Still, Phillips said this storm was very unusual for Calgary, where systems tend to move on quickly:

“I often think the best weather in Canada is there because it hits and runs. It doesn't stand arond and torment you, like it does in other areas. But (the storm) stood around like an unwanted houseguest and wouldn't leave...it went in opposite – instead of going from west to east it went east to west and it backed up aginst the mountains."

"That kind of rainy weather may become frequent in the years to come as the earth's climate warms up."

Phillips said there was "no way to make any connection" between the oil sands and extreme weather, due to lack of evidence. However, he said that the hotter climates -- partly caused by human activity -- are tied to more extreme rainfall and floods.

And by warming, that doesn't translate to "fuzzy warm summers" and shorter winters, but more abnormal weather events.

"When the earth warms, that means more rain because the atmosphere can hold more moisture. For every degree of warmth, it can hold 7 per cent more moisture,” he said.

“This is the stuff that fuels storms, that creates more downpours in short periods of time, more of these bellywashers – we see the evidence everywhere. Not so much if you look at Regina or Winnipeg, but there's enough evidence aruond the world... It's not raining as often, but when it is, you're getting more amounts than you would in the past. There's clear unquestionable evidence of that.”

Around the same time that the floods hit Alberta, Germany and the Czech Republic suffered the worst heavy rain and floods since 2002, killing over a dozen people and causing billions in damage.

Northern India is also undergoing the worst rain and flooding in 60 years, causing 600 deaths and leaving 40,000 people stranded. An op-ed in The Hindu news was far more blunt in its assessment, calling the rainfall "another climate change event."