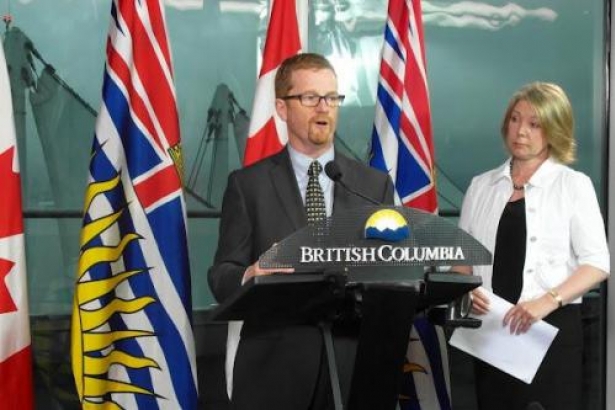 Photo from July 2012 of Environment Minister Terry Lake by Beth Hong
The BC government's final written submission stated that it cannot support the Enbridge Northern Gateway pipeline proposal as presented beause Northern Gateway has been "unable to address British Columbians' environmental concerns."  This decision comes after a large-scale petition urging Premier Christy Clark not to support the pipeline.
Despite reports that Enbridge would meet the BC Liberal government, Premier Clark's office confirmed that no meeting has occurred yet, and that none was scheduled.
"Northern Gateway has said that they would provide effective spill response in all cases. However, they have presented little evidence as to how they will respond," Lake said in a news release.
"For that reason, our government cannot support the issuance of a certificate for the pipeline as it was presented to the Joint Review Panel."
Lake said the government has carefully considered the evidence presented to the Joint Review Panel, and asked questions about the pipeline route, spill response and financial structure to handle risks. Based on the evidence, however, he said the government "does not believe a certificate (for building the pipeline) should be granted before these important questions are answered," and that Enbridge did not provide satisfactory answers during the hearings.
The Premier has outlined five conditions that need to be met for Northern Gateway to be approved.
These include:
BC will present oral final arguments to the Joint Review Panel when hearings recommence in Terrace on June 17, based on  the final written submission.
Read More:
Share on Facebook Share on Twitter