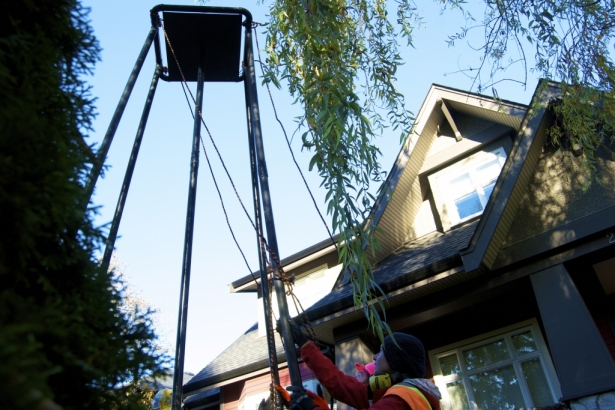 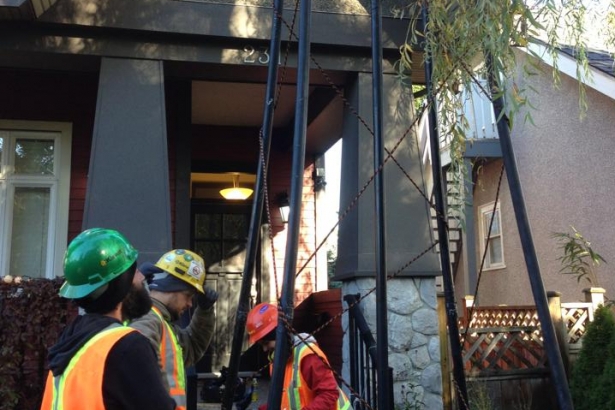 It was a sunny Sunday morning in Vancouver when a group of people in hard hats, work boots and orange vests arrived at Premier Christy Clark’s house. They didn’t say much, but got to work setting up a 15-foot-tall mock fracking rig on Clark’s front lawn.

The people were members of the Vancouver chapter of Rising Tide and the event, co-organized by the Council of Canadians, was a protest to bring attention to the BC government’s push to expand hydraulic fracturing without the consent of the people whose territory would bear the brunt of the impact.

The construction workers set up the rig while others cheered them on, announcing that since Clark is so excited to frack land that belongs to others, they would bring fracking right to her.

Speakers focused on the damage the process has on fresh water, and members brought individual-size water bottles full of yellow water, meant to represent the cocktail of chemicals than can leach into the groundwater as a result of fracking, and poured them out on the lawn.

“We’re saying no because First Nations are saying no,” Rising Tide member Teresa Diewert said through a megaphone.

Hydraulic fracturing, or fracking, is a process in which billions of gallons of water, mixed with sand and chemicals, are injected into the ground at high pressure, fracturing shale rock and releasing natural gas. The process can cause gas leaks, small earthquakes and exposure to chemicals such as hydrogen sulphide, known to be associated with health problems ranging from skin irritations to miscarriages. Waste chemicals and gas have been known to contaminate drinking water supplies.

There have been reports from communities in northern BC of tap water that smells like gas and burns the skin, and toilets bowls turning black with chemical residue.

After a concerned observer called 911, four police cars arrived and the group removed the rig from the lawn and set it up again on the boulevard. Police said they were just there to keep people off private property and make sure nothing was left on the premier’s lawn. No arrests were made.

Maryam Adrangi, a member of Rising Tide and energy campaigner with Council of Canadians, said it was crucial to hold the event at Clark’s home rather than her office to bring attention to the lives of those in northeastern BC whose homes are being damaged.

“It really has to do with peoples lived realities up north. It’s not necessarily just where people work that people impacted. It’s impacting every moment of their daily lives.”

“Unfortunately we weren’t able to actually get fracked gas out because the cops did come, which is interesting because they never seem to give industry notice of trespass when it happens in northern BC,” she said with a small smile.

In recent months Clark has been travelling outside the province to promote liquefied natural gas (LNG) development throughout the country.

The action comes just two days before Clark is set to meet with Alberta Premier Alison Redford to discuss the future of a joint energy plan. Redford will also address the Vancouver Board of Trade.

“It’s propaganda from the government to make themselves sound green and sound responsible while being a major player in climate change.”

Carbon Talks: is climate change the elephant in the room for BC's LNG?