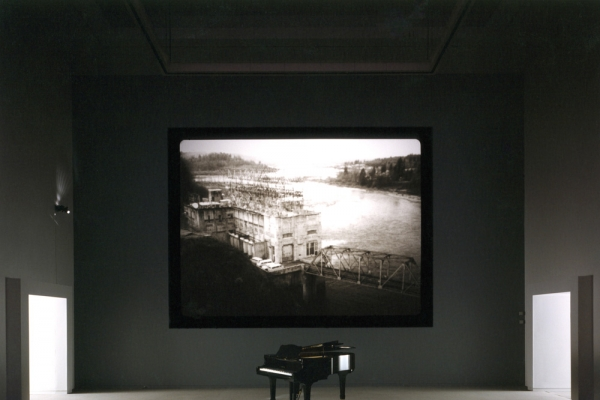 This unique symbiosis of music and film is a “specialty” for the Turning Point Ensemble.

“Turning Point Ensemble has made a kind of specialty synchronizing live performance with film, we've done a number of performances in the past and we wanted to create some new works, combine them with some of the ones we have done before," conductor Owen Underhill told the Vancouver Observer in a phone interview.

Cinema Musica pays homage to the early days of film as the images roll, the ensemble plays live in sync.

"In fact the earliest film that is in the show it's an experimental film that's called "Regen " (rain in German) from 1929. So we have a film from 1929 and also these new works that we have created especially for this performance," Underhill said

Good Night Vision includes a new film created by Radul which will be accompanied by a piece written in 1909 by Italian composer Busoni, an elegy for the death of his mother. Radul makes use of thermal (heat sensitive) cameras to give a dark effect that goes in tandem with the theme of death and loss. On the stage, the images will show the shadows of the ensemble playing.

The second multi-layered new piece, “Suspense” by, Houle in collaboration with San Francisco-based video artists David and Hi-Jin Hodge, breaks the norm that reigns in film -- music being composed after the film editing is completed. Instead, the images are made to fit the music.

Suspense also features gymnasts that will be appearing on video, along with the ensemble on screen and also playing live.

Turning Point Ensemble will be presenting Cinema Musica: A Live Conversation on Sunday, January 20 2013 at 2 p.m. (matinee) and 8 p.m. at the Goldcorp Centre for the Arts at SFU Woodward’s.

From Steve Jobs to the godfathers of beat poetry: 3 biopics to watch at Sundance