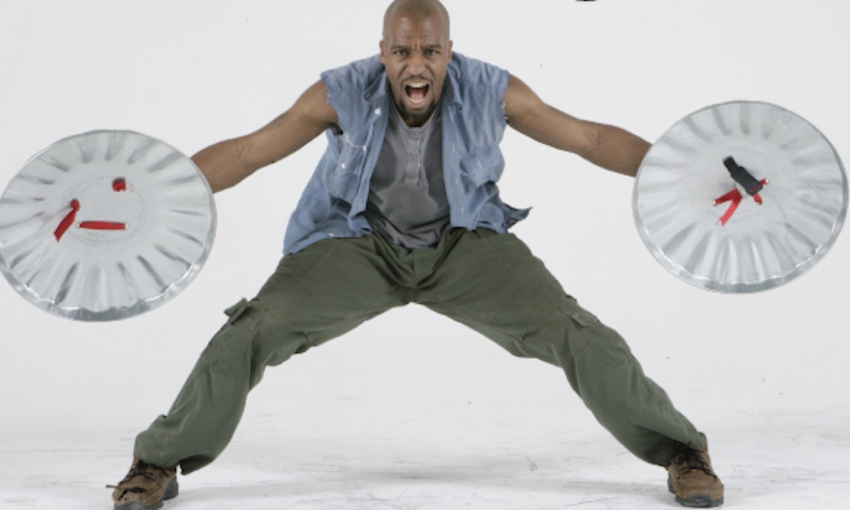 Lifting the lid on percussive improv. Photo by STOMP

STOMP – the 25-year-old percussion ensemble of makeshift, self-improvised gongs, bongs and drums – is back in town for a three-day engagement.

Much of the opening night audience was comprised of pre-teens -- those consummate connoisseurs of clamour -- chaperoned by their parents or grandparents. The kids seemed a little daunted, at first, filing into the big league precinct of Vancouver’s premiere high culture temple, the QE Theatre.

But their eyes soon lit up when they caught sight of the uncurtained stage: everything from giant plastic rainwater barrels to oil drums to trashcans, washtubs and tinkly little ramekins. Rising, tier on tier, up to the proscenium’s ceiling grid – three stories worth of clangourous junk, full of high-decibel promise.

Still, the silent array of potential noisemakers could only hold interest for so long. As the delay dragged on beyond the designated starting time, the children got squirmy. Their faces started popping up over the heads of the full-house crowd, craning for a glimpse of anyone onstage.

When somebody finally did appear, it seemed a tad anti-climactic: just a solo janitor, Jeremy Price, desultorily plying a push broom. One-by-one, though, the other seven members of the touring ensemble drifted in until the aimless assortment of sweepers gradually coalesced into a brisk tap dance free-for-all.

And from that point on, the beat never flagged. No speech, no tunes and no intermission – just straight, strenuous percussion for two solid hours. STOMP’s founding co-directors, Luke Cresswell and Steve McNichols, put the troupe through its paces, choreographically and acrobatically as well as rhythmically. The show presented an idiosyncratic blend of hip-hop, breakdance, parade drill, clown car and blind man’s bluff.

And all without benefit of any purpose-built, recognisable musical instruments. Rather, an assortment of improvised props repurposed to wildly off-label applications. Aside from the aforementioned three-storey trash heap, there were such carry-on items as Zippo lighters, PVC pipe lengths, grocery shopping carts and – literally – kitchen sinks. Full of water, no less.

All of which left the kids and their chaperones quite awed by these performers – their consummate artistry and versatility, but also especially their sheer stamina.

Some stamina was required of the audience, too. You can’t just watch STOMP passively in place, it turns out; you find yourself, willy-nilly, compelled to jiggle and jounce along with the show.  Even for pre-teens (let alone their creakier escorts) two hours of uninterrupted percussion can get wearing.

Not that there was anything monotonous about the program. Cresswell and McNichols ingeniously switch up the rhythms and textures of the sound, the lighting and the choreography to keep things moving.

Shadowy interludes like the Zippo fugue alternated with blaring, flaring duels of trashcan lids. One moment the performers would be thumping kettles, kegs and tubs while swinging from the rafters. Next they’d be bouncing downstage on inner tubes or scuttling crab-wise across the proscenium apron, wringing eerie resonances out of drainpipes.

Through all these changes, Price emerged as the troupe’s de facto drum major, often offset by the impeccably timed sight gags of his Second Banana and all-around comedic fall-guy, Guido Mandozzi. Other stand-out performances: the incandescent energy of Krystal Renée and the gravity-defying grace of Artis Olds. But it’s hard to single out anyone amidst such a dazzling array of talent and disciplined, coordinated teamwork.

At the grand finale, the STOMPers teamed up for a thunderous extravaganza of trashcan drumming, broomstick duelling, stilt-walking on giant oil drums and clashing trash-lid cymbals. And then, with our ears still ringing, Price carefully tutored his audience how to clap and stomp in coordinated syncopation for a prolonged standing ovation.