TUTS' glass-slippered Cinderella lighter on its feet than Disney original 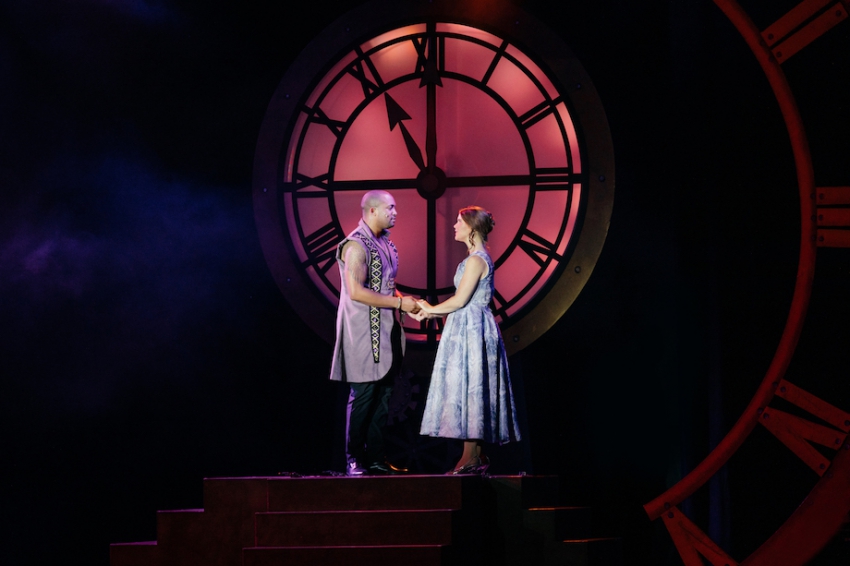 Growing up in New York in the era of $10 Broadway tickets, I got to see my share of Rodgers and Hammerstein musicals on the live stage. So I was primed for their first – and, as it turned out, only – venture made for the then-new medium of colour television, Cinderella, in 1957. Along with 107 million other Americans, I tuned in for the broadcast, which was produced at the extravagant (for that era) cost of nearly half a million dollars.

What a letdown! Julie Andrews, in the title role, looked older than my glamorous grade school teacher, Miss Barzey, and far ditzier in her servile adoration of her insipid prince, the aptly named Jon Cypher. The dancing seemed crabbed on the 12” screen, the songs fell flat and the Oscar Hammerstein dialogue sounded canned and clunky. Through the thick glass of our RCA vacuum tube, the whole affair had a sodden, underwater feel.

With some trepidation, then, I signed up for this year’s Theatre Under the Stars (TUTS) restaging of the show at Stanley Park’s Malkin Bowl. For reinforcements, and as a kind of ad hoc focus group panel, I brought along a couple of neighbour children, ages five and eight.

I needn’t have worried, though. The two-hour show proved a pure delight, start to finish, including intermission hot chocolate break to recaffeinate the kids so long past their customary bedtimes. Even before the opening strains of the overture, they were down in front kibitzing music director Brent Hughes as the 15-piece orchestra tuned up.

And when the lights came up on angsty Prince Topher (Tré Cotten) agonizing, in his soulful baritone, about “Who Am I?” even after casually slaying a giant, my 8-year-old seat mate seemed to fully share his identity crisis. His little sister, for her part, could empathize with the fantasy life of Cinderella (Mallory James) in the cozy refuge of her “Own Little Corner” by the scullery fire.

But each of these protagonists is thwarted by Adult Supervision. The prince is in the thrall of an obfuscatory, Kissingerian regent (Michael Wild) of sinister suavity. Poor Ella, for her part, is shamed and exploited by her stepmother (Caitlin Clugston).

What humanizes these supporting roles, in comparison to the original script or the Disney 1997 adaptation, is the substitution of a brand new book by Broadway librettist Douglas Carter Beane. In this version, the stepmother is less of a vengeful harpy than just a snobby social climber, while the elder stepsister (Amanda Lourenco) is merely clumsy and randy.

And the younger stepsister (Vanessa Merenda) nurtures a secret crush on an idealistic young whippersnapper (Daniel Curalli), which turns her into Ella’s covert ally. The three of them plot, with the aid of a half-mad baglady-turned-fairy-godmother (Laura Cowan) to crash the palace ball and apprise the prince of how his courtiers have duped him into gouging the peasantry under his royal imprimatur.

My young seatmates seemed to take all this class analysis readily in stride, while the adult chaperones in the audience got a few chuckles out of Beane’s occasional offhand epigrams. In any case, director Sarah Rodgers moved the action along too briskly for anyone to balk at the improbabilities.

In this she was greatly helped by choreographer Nicol Spinola. Strong as the lead performers were, the show left the impression that dancing talent somewhat outclassed the singing and acting prowess in the 30-member cast. Spinola used all those bodies to good effect, filling the stage with spirited, high-precision choreography.

In a sign of the times, the glass slipper is not inadvertently dropped at the stroke of midnight in the initial ballroom scene, but rather flung as a feminist challenge when Cinderella and her reformist allies manage to storm the citadel for a second – and far more hortatory – encounter.

In the end, of course, the kingdom converts itself into a happily-ever-after electoral socialist monarchy, to the manifest satisfaction of my little focus group.