War on Xmas: Ralphie gets a gun 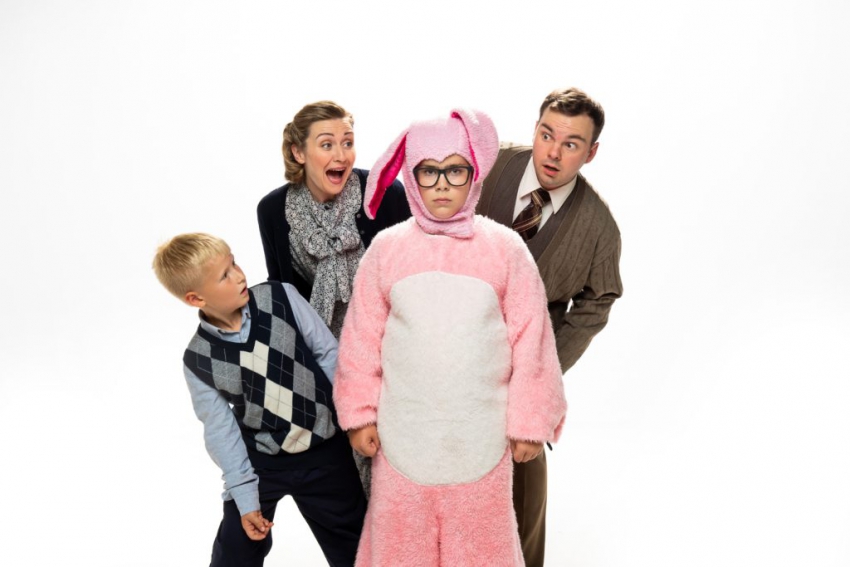 Just eyeballing the 32 bodies on Burnaby’s Michael J. Fox Theatre stage for Align Entertainment’s revival of A Christmas Story, the Musical, I’d estimate the median age of the cast at about 15. And that includes a fair sprinkling of hyper-kinetic 40-somethings mixed in with the dauntingly talented juveniles.

So most of the players would be way too young to remember the late, great raconteur Jean Shepherd, whose childhood reminiscences plot the show. But the Banj Pasek/Justin Paul/Joseph Robinette script perfectly captures Shep’s patent blend of Middle American nostalgia and Greenwich Village irreverence on New York late night radio back in the 1960’s and 70’s. Like those legendary broadcasts, the musical injects myriad little send-ups, both scripted and physical clowning, to save the show from cloying sentimentality.

There’s something a tad subversive about the mere presence of so many pint-sized choristers in choreographer Melissa Turpin’s ebullient – and very adult – bump-and-grind kick lines. But producer/director Chad Matchette’s masterstroke of pre-teen casting is to slot 11-year-old Owen Scott into the role of Ralphie, Shep’s juvenile avatar.

Quite aside from his estimable singing and dancing chops, the kid convincingly deadpans his age-appropriate obsessions: how to appease his saccharine Mom (Stefanie Stanley), his irascible Dad, aka “the old man” (Brennan Cuff), his strict schoolteacher (Amanda Russell) and even the boozy Santa down at the local department store.

If he can ingratiate himself with these gatekeepers, he just might snag the Christmas present of his dreams: a Red Ryder Carbine Action BB gun, suitable for routing Bad Guys and saving damsels, as detailed in a show-stopping daydream sequence. Gun culture, after all, was not so vexed an issue back in 1940, when the story is set.

In fact, in an in-class theme, our young protagonist even goes so far as to present a presciently Trumpian case for arming himself in school. This, he fully expects, will earn him an A++ and an authoritative ally in his quest for a Christmas rifle. Instead his teacher marks him a dismal C+ with the tart addendum “you’ll shoot your eye out.”

That line (set to the NYA nyanya Nyah-Nyaah tune of the immemorial schoolyard taunt) becomes the refrain for a dance extravaganza. The schoolroom morphs into a Roaring 20’s speakeasy and the pinched schoolmarm becomes a sequinned flapper who leads the whole ensemble in dazzling tap routines.

Such lightning transformations abound throughout the two hour show, testimonial to the ingenuity of costume designer Maureen Robertson and set designer Conor Moore. Stage manager Sara Lohnes miraculously keeps the whole intricate clockwork ticking without any of the frenetic dancers dropping into the orchestra pit, where conductor James Bryson leads his dozen-member ensemble.

The baby of the cast, Georgiy Rhatushnyak as Ralphie’s kid brother, is too cute for comfort and eerily self-assured. And the adult co-stars more than hold up their end of the production – Cuff endearingly blustery, Stanley the very picture of housewifely self-effacement and motherly omnicompetence, and Russell delightfully schizoid as the real versus the fantasized teacher.

And then there’s Shep himself, played by Trent Glukler as a foreshadowing presence.  When he’s not cheering Ralphie on with unheard words of ghostly encouragement, he turns to directly address us in the audience with wry narrative reminiscence.

It’s very much the midnight voice I remember clandestinely tuning in to as a New York pre-teen way past my bedtime. I left the Fox Theatre feeling decades younger. So will you, if you’ve got decades to spare. Go see this musical and take the kids.