Valentijn Dhaenens mouths off at The York 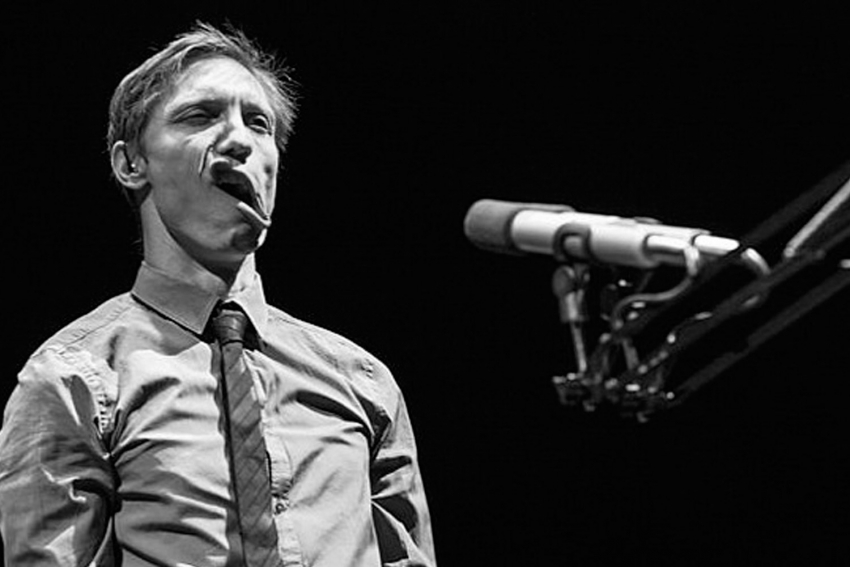 Dhaenens: "What we can do with this tiny hole in our heads." Photo: SKaGeN

As a Flemish actor from Antwerp, Valentijn Dhaenens needs to know plenty of languages. In his one-man show Bigmouth, which runs through Sunday at The York, he uses at least five of them by my count: Flemish and French, the two national languages of his native Belgium, plus Latin, German, American and whatever you might call the native dialect of George W. Bush.

Dhaenens' subject is speechification. And that, as he explains in a post-show Q&A with the audience, is a far cry from mere speech. Plain old talk is just communicative, human-scaled, person-to-person. Your orator, though, uses artifice to make himself larger than life, the better to address some superhuman interlocutor -- God, or The Ages or The Court or The Masses or The Nation or The Troops.

This usually entails some sort of privileged, curated technology -- prayer, or historiography or, in our own times, the broadcast microphone. In Bigmouth, such amplifiers are symbolized by a row of seven mikes, each with its own rostrum complete with the regulation tumbler of drinking water. The lecterns link together to form a sort of dais which Dhaenens prowls behind, alighting from one mike to another as he shifts voices and personae. In between speeches, he also sings polyphonal a capella harmonies with himself through the miracle of loop-track dubbing.

He starts with Latin plainsong, the Agnus Dei,and segues straight into a Dostoyevsky's Grand Inquisitor in a 16th century Spanish dungeon solemnly upbraiding a mute reincarnation of Jesus that he means to burn at the stake. Then cut to a plangent -- but unrepentant -- Nicola Sacco, immigrant anarchist, as he's led off in handcuffs to his 1926 electrocution on a spurious murder conviction. Then the reedy near-whisper of Socrates as he accepts his draught of hemlock in the fifth century B.C. The thematic and rhetorical linkages are all the more pointed for being scattered across such a millennial time span.

But just as striking is the pairing of the next two speeches, separated by just a few weeks in 1945: Nazi propaganda minister Joseph Goebbels exhorting the Aryan Volk to "Total War" in the face of immanent defeat, and U.S. General George S. Patton urging on his troops to "wade into" the Nazi ranks, "spill their guts, rip their belly." Dhaenens intercuts the two texts to heighten the contrast. The Goebbels speech (delivered in German, with English supra-titles), comes off as polished, syntactically intricate, almost urbane. Whereas Patton, swaggering and profane, practically licks his chops at the bloodshed to come. The rhetoric couldn't be more different, but the underlying invocation is the same: unstinting sacrifice for some over-arching goal.

Where this leads is underscored in the next set of speeches. First we have the Athenian general Pericles' 429 B.C. funeral oration for nearly a thousand compatriots who died repulsing the first wave Spartan assault of the Peloponnesian War. To set an appropriately teary mood, Dhaenens first douses his eyes with the contents of a couple of lectern water tumblers -- just the sort of speech-prep trick a 21st century politician might equally well adopt. In fact, the speech is delivered in supra-titled French to highlight the near perfect textual match with French ex-president Nicolas Sarkozy's eulogy for the war dead that he'd sent to join the Western "coalition of the willing" in Afghanistan.