Under the Stars: Boycotts and Bubblegum 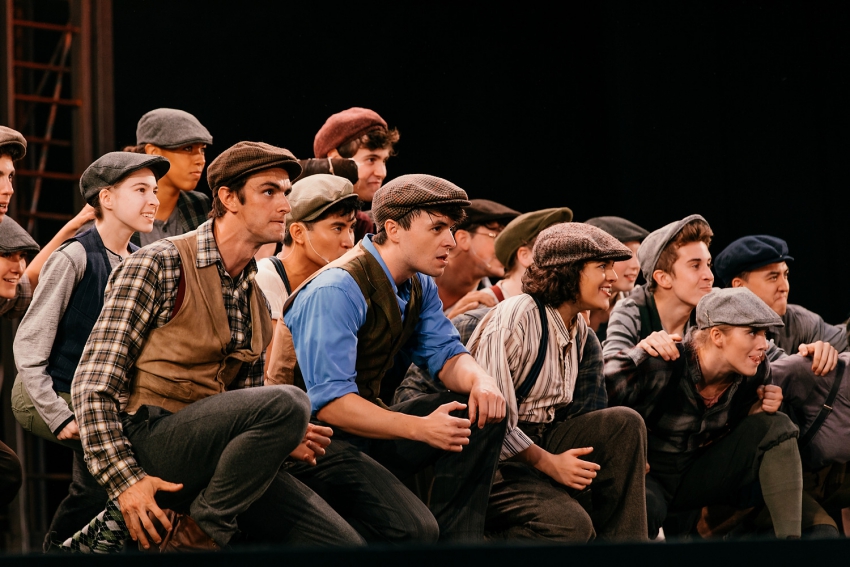 White House fulminations to the contrary, there’s nothing exactly New about Fake News. Now that we’ve come full cycle back to another heyday of income inequity, it’s worth remembering how the media barons of the last such Gilded Age, the “Belle Époque” of the 1890’s, gifted us with the term and tropes of Yellow Journalism.

This forms the backdrop for 2019’s banner musical, Newsies, at Theatre Under the Stars (TUTS) in Stanley Park’s Malkin Bowl. It’s a brisk, tuneful, crisply choreographed Disneyfication of a real-life watershed in labour history, the 1899 New York newsboys’ strike.

Foremost among those Gilded Age New York press lords was Joseph Pulitzer, whose name we now associate with a bevy of lustrous cultural prizes. Back in his own day, though, Pulitzer was known not so much for his philanthropy as for his buccaneering business ethics. On the Malkin Bowl stage, as portrayed by Vancouver’s own polymath thespian Jovanni Sy, he comes off as an ebullient, back-slapping, strategically cynical opportunist, on constant, canny Lookout for Number One.

In their circulation wars, Pulitzer and his arch-rival. William Randolph Hearst, would stop at nothing, up to and including inciting a war (the Spanish-American conflict of 1898) with inflammatory made-up fake news stories – what we’d nowadays call clickbait. Except in the 1890’s, the memes were distributed not by bots, but by “boys”: newsboys or Newsies, aged preteen to early 20’s.

Pulitzer et al skimmed their Newsies off the bottom of the viciously skewed income distribution – just one more sector (along with garment sweatshops, textile mills, packing houses, inter alia) of Gilded Age child labour exploitation. So when newspaper circulation slumped after the sugar high of the press lords’ fabricated War, ostensible rivals Hearst and Pulitzer colluded to offload their margin squeeze onto the backs of the Newsies. They decreed an overnight 20% hike in the wholesale bulk price the waifs would have to pay for their bundles of newspapers.

But “boys,” unlike bots, can bite back; under the leadership of a charismatic firebrand (Adam Charles in the TUTS version), abetted by a crusading proto-feminist reporter (Julia Ullrich), the Newsies mount a strike that slashes circulation city-wide. The publishers use their oligopoly power (plus some cash bribery) to bring the union leaders to heel.

But then the girl reporter stiffens their resolve for a “Children’s Crusade” – a general strike across all sectors of underage, underpaid labour. This grinds New York commerce to a halt. The media moguls have no choice but to offer compromise concessions.

Strange to tell, in broad brush outline that’s even a bit like the way things actually went down in 1899. But, given the show’s pedigree (a 1992 Disney movie, adapted into a 2012 Broadway musical), Newsies is at some pains to lighten up the overtones of class warfare.

So the girl reporter turns out to be Pulitzer’s own daughter, idealistically moonlighting incognito. And, turning the crank on the strikers’ clandestine printing press is Hearst’s own son. And, in the final scene, the Working Class Hero and the well-born crusading reporter seem headed for the altar, with the implicit blessing of Pulitzer himself, who has offered the union leader a Yellow Journalism berth as an editorial cartoonist.

These counterfactuals are smoothed over by thoroughly winning performances. As cutthroat competitors go, Sy’s Pulitzer is almost endearing, by turns silky and cuddly. Charles, the union leader, leads his troops from a pugilistic semi-crouch, braying his rallying cries in a raw tenor and then courting his inamorata with a patent mix of diffident bravado. It’s a potion that evidently bewitches Ullrich’s spunky Miss Pulitzer. The young couple exude credible chemistry in their clinches.