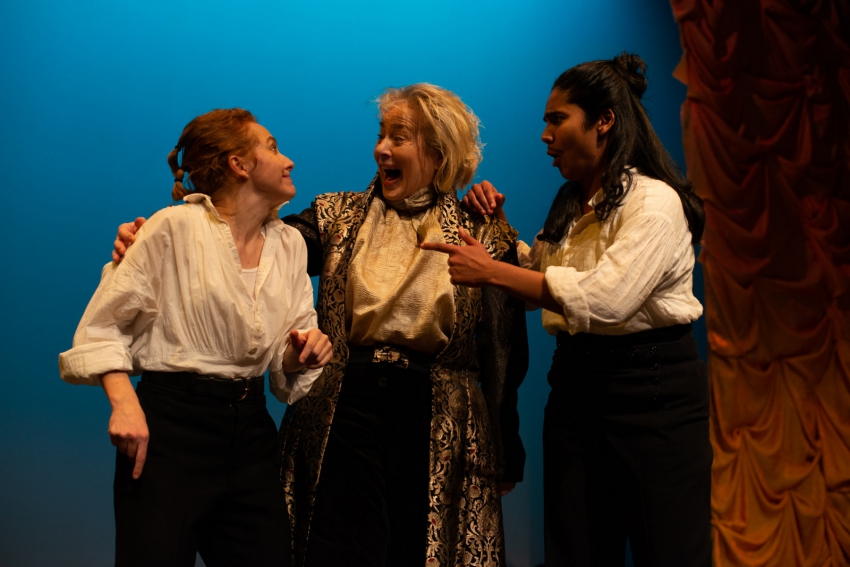 As a topper in the most-performed rankings of Shakespeare’s Greatest Hits, Much Ado About Nothing has endured 400+ years of stage adaptations. It has been set in garden mazes and Halls of Mirrors, transposed to historic periods and exotic locales. Even Vancouver’s own Bard on the Beach made bold to recast the script in the Tinseltown tropes of a 1960’s Roman film lot.

So Classic Chic’s straight-up current production at The Cultch comes as a relief. The show is literate, lucid and luminous, without gimmicks. Well, almost…One last gimmick, though, seems baffling at first glance: the 11-member cast, not to mention the whole production team, is entirely female.

That choice earned the show inclusion in the 2019 roster of The Cultch’s annual Femme Series. It also accords with the stated mission of Classic Chic and its New York-based guest director for Much Ado, Rebecca Patterson, to allow “female-identifying artists to explore roles typically unavailable to them.”

But why impose such a constraint on a play so inextricably bound up in the politics and psychology of gender?

The first and obvious answer is just the incandescent candle-power of female talent in our midst and the richness of the roles on offer. The Classic Chic performances are first-rate and Patterson melds them together with impeccable timing.

Could it be that an all-female work environment aided this clockwork coordination? All the more impressive as a programme insert reflects last-minute personnel changes, with the production’s set and props designer dropping out and actress Adele Noronha stepping into a co-starring role.

But the unisex casting works at a subtler level, too. It damps down the focus on sexual “chemistry” that’s foregrounded in so many more flamboyant Much Ado productions.

Instead we home in on psychological nuance and the sheer verve of language in this wordiest of scripts. Just by narrowing the inflections of spoken dialogue to the female pitch range, we already get to savour more of Shakespeare’s verbal stunt pilotry.

This is most evident in the core pairing of the story. Corina Akeson’s Benedick is a far cry from the character’s all-too-frequent portrayal as a bragadociously swashbuckling soldier freshly returned from quelling a rebellion. Here he’s more of a nerdy punster brazening his way through his own self-conscious stammer.

He meets his match – verbally and, at last, romantically – in Beatrice (Christina Wells Campbell), who skewers him with rapier wit and a withering Nancy Pelosi stare. Nowadays, such a glance might well deflect harmlessly off a thick enough orange hide. But with Benedick it hits home, especially once his battle buddy Claudio (Naronha), his ducal commander, Don Pedro (Kayla Deorksen) and their homestay host, the wealthy grandee Leonato (Barbara Pollard), implant him with an ear-worm about how poor Beatrice secretly carries a torch for him.

To round out the ruse, Leonato’s daughter and sole heiress, Hero (Sereana Malani) seeds Beatrice with an equal and opposite imputation of Benedick’s hidden and unrequited passion for her. That’s all it takes to divert the victims of these deceptions from barbed banter to tongue-tied courtship.

But then the rom-com turns dark. Don Pedro has brokered a match between Hero and Claudio, but the duke’s embittered bastard half-brother, the defeated rebel Don John (Sara Vickruck), is hell-bent on derailing the alliance. He has his henchman, Borachio (Bronwen Smith), enact a dumb-show to convince the groom and the matchmaker that the bride has been unfaithful on the very eve of the wedding.

The charade works. Hero is publically spurned at the altar, her father vows vengeance and Beatrice presses Benedick to duel Claudio to the death. Disaster is averted only when a troupe of oafish city night watchmen bumble into Borachio, arrest him and drag him before the duke.

All this is mounted with hardly any stage set – just a couple of curtains. For Beatrice and Benedick’s “overhearing” scenes, she hides under an onstage bench, while he slinks amongst the audience seating. Costumes (by Sherry Randall) are minimal, too: a wrap-around skirt here, black jodphurs there, an occasional frock coat. The night watch clowns (played by various co-stars, doubling up on roles) are drolly tricked out in floor-length yellow oilskin sou’wester hats and fishermen’s slickers.

The absence of stage clutter works in much the same way as the unisex casting: it lets each actor bring out the psychological essence of the character in her own way. Pollard’s Leonato has already arrived at an age to swerve from open hospitality to protective parental ferocity without reference to age. Naronha’s Claudio is a puppyish, thoughtlessly impetuous “Sir Lackbeard.” Vickruck’s Don John is a tight-coiled bundle of spite. Deorksen’s Don Pedro is so torn by conflicting loyalties that he’s ready to reconcile with his half-brother even after his potentially death-dealing ruse is exposed.

So the play’s purported happy ending of a double wedding looks inconclusive after all. As Benedick plainly warns his Beatrice, “Thou and I are too wise to woo peaceably.” And Don John still lurks in the shadows.