Tinseltown tropes in Bard's "Much Ado" 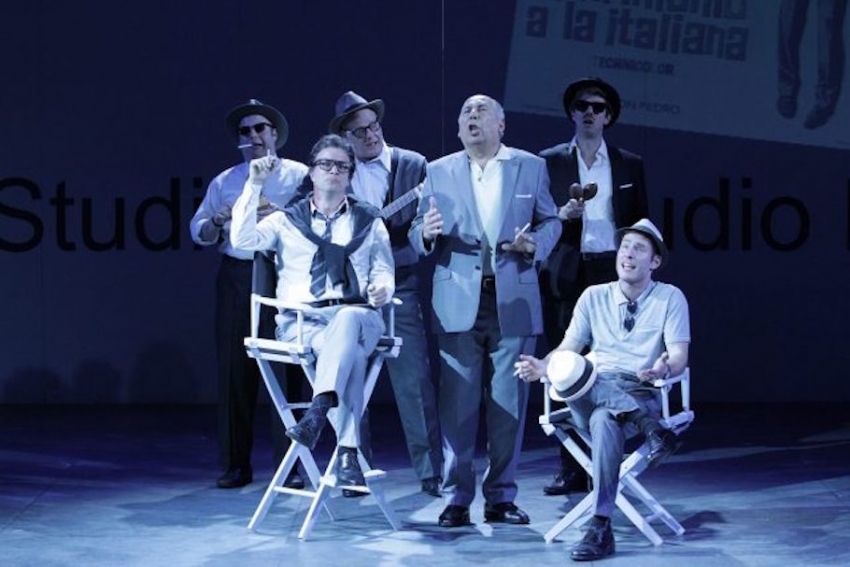 Ever wonder how to say “hey, nonny nonny” in Italian? It comes out something like ‘è, nnuoní, nnuoní.’

At least that’s how it sounds if you’re veteran Vancouver trouper David Adams playing a court minstrel in director John Murphy’s adaptation of Much Ado About Nothing for the Bard on the Beach mainstage this year.

Composer Murray Price has Adams sing the rest of Shakespeare’s iconic ballad (“Sigh no more…but let them go, and be you blithe and bonny”) in moody Italian, with English surtitles and flouncy Dean Martin mannerisms.

It’s just one of the many send-ups in this campy transposition of Shakespeare’s iconic Elizabethan rom-com to the sun-kissed milieu of 1950’s Hollywood.

Or, more accurately, to Hollywood on the Tiber, that fleeting post-War interlude when fashion and currency devaluation lured a whole Rat Pack of American movie moguls, starlets and hangers-on to take over Italy’s Cinecittà for production of such classics as Roman Holiday or Three Coins in the Fountain.

Other Tinseltown touches: the reinvention of Prince Don Pedro of Aragon (Ian Butcher) as a Felliniesque directorial maestro and his malevolent bastard half-brother Don John as a bitchy female gossip columnist (Laara Sadiq as ‘Dona Johna’); or the ubiquitous flashbulb ambushes by her villainous sidekick Borachio (Ben Elliott) and his fellow paparazzi.

Not to mention the dolce vita élan of the two co-stars, Beatrice (Amber Lewis) and Benedick (Kevin MacDonald), as they flirtatiously pursue each other on sporty Vespa scooters, chain-smoke mentholated cork-tips and punctuate their repartee with flicks of their Zippos.

But for sheer screenland glam, the highpoint of the evening has got to be the masked ball. Choreographer Tara Cheyenne Friedenberg has B&B enact their barbed banter in the form of a smouldering tango. Tricked out (by costume designer Christine Reimer) in a black-spangled sheath slit up to the thigh, Lewis’ Beatrice smoothly dominates the dance and the battle of wits.

A black-and-white palette prevails in the costuming, as well as the staging (by set designer Pam Johnson and lighting designer Gerald King) right up through the whole first half of the production, lending an “early talkies” feel to the brittle dialogue. But then, as soon as the two protagonists suspend their “merry war,” the stage blossoms into Gorgeous Technicolor.

Apt enough, perhaps, for the new-found comity of the two co-stars, but a curious choice of plumage for the other sub-plot of the latter half: the malicious slander of Hero and her abrupt, uncritical abandonment by all the key men in her life – father, fiancé and ‘maestro’ alike.

Luckily studio rent-a-cop Dogberry (Ashley O’Connell) and his hapless posse bumble onto the scene. Their ‘physical comedy’ slapstick all-but-eclipses their howler malapropisms, but in the end they somehow manage to set things right.

So director Murphy gets to pretty much sidestep the play’s darker undertones of misogyny and keep things “blithe and bonny.”