McDonagh's "Beauty" in the eyes of the beholder @ Jericho Arts 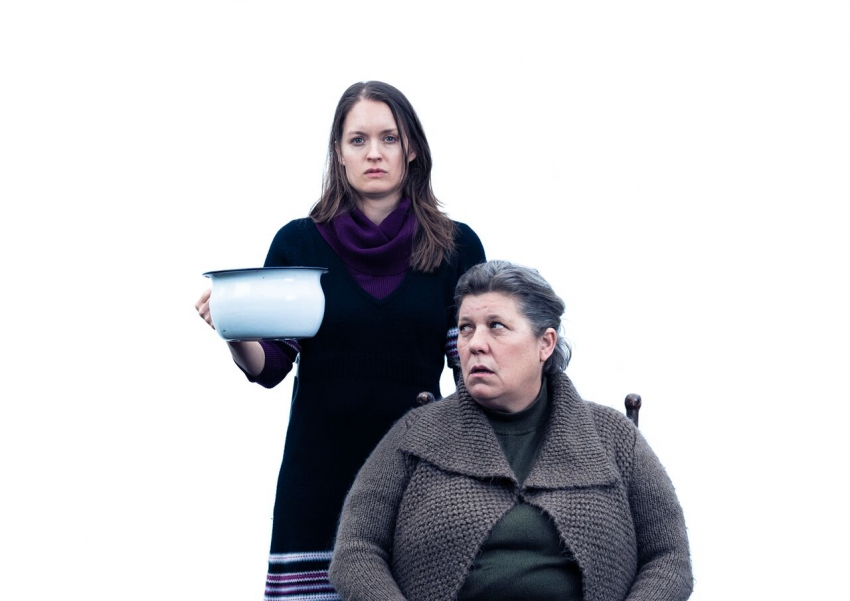 The air gets so close in the black box theatre of the Jericho Arts Centre, where Ensemble Theatre is currently running its 6th annual Summer Repertory Festival, that the lobby bar has to sell folding fans ($3 apiece).

The whole hodgepodge is minutely prescribed in the stage directions of Wunderkind Irish playwright Martin McDonagh’s script. Everything in the room finds a use at some point in the two-hour psychodrama.

It's all encoded in the baroque bitchiness of Irish metaphor and invective, delivered with the acid tang of Galway phonemes and intonation (thanks to dialect coach Brian Parkinson). Sound designer Javier Sotres offsets the backbiting snark against intermittent bursts of jigs, reels and ballads from the radio.

The arch saccharinity of the music only highlights the acrid dialogue, like the biting bittersweet tang of a fine Irish marmalade. But any condiment has a finite shelf life. Shut away long enough, it will fester and burst out of its jar.

So when émigré hod-carrier Pato (Ashley O’Connell) comes home to Leenane on a brief leave from his wage-slavery in London, Maureen seizes the chance to bring him home for a chaste – but steamy – overnight tryst. The morning after, in bra and slip, she flaunts her newfound sexuality, scandalously smooching with her abashed beau right in front of her cowed mother.

To Mag, this is an existential threat. The old frump tries to reassure herself when Pato heads back to England. “He’ll never write you,” she sneers to her daughter. Little does she know…

Via his stay-at-home younger brother (Francis Winter), Pato sends Maureen an “eyes-only” proposal that she decamp with him to America, leaving her mother behind. Mag cadges the letter out the brother’s hands and consigns it to the peat fire. Only on the very day and hour of Pato’s departure for Boston does Maureen piece together what has happened.

Without giving away too many plot-point spoilers, suffice it to say that her daughter’s sleuth-work goes hard for Mag. Which leaves Maureen assured that she’s caught up with Pato just in time to salvage their chance for a new life together.

For all the ornate sarcasm of the dialogue, director Kathleen Duborg permeates the play with the pathos of truncated lives. Dixon-Warren’s operatically dowdy Mag practically begs for Slenning’s acid cruelty. Even in the relatively minor role of the kid brother, Winter squirms with pent-up frustration and omnidirectional loathing. Only O’Connell’s Pato emerges unembittered but, in such a context, his hapless decency seems all the more doomed.

Vintage McDonagh. In his world, nice guys always finish last. Yet he somehow manages to leave us still hoping against hope.