Fabulist Theatre revives "Once on this Island" @ Redgate 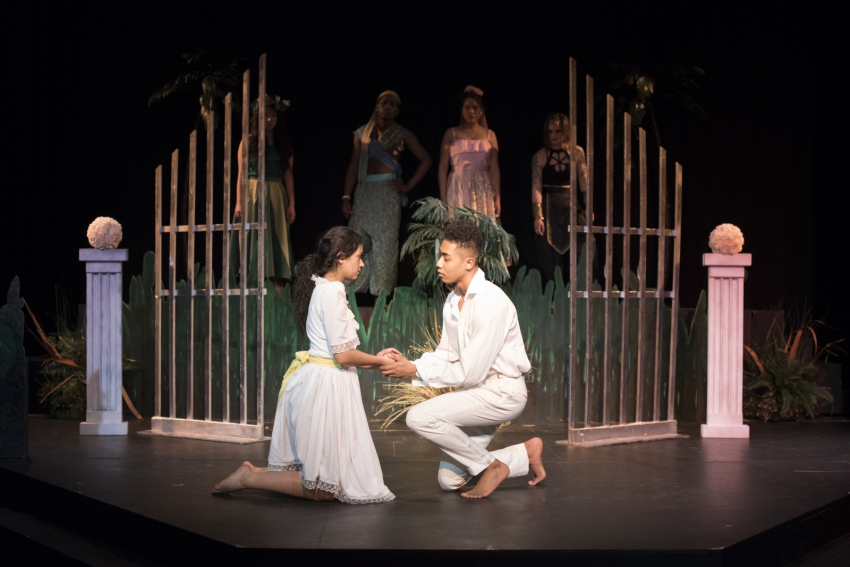 Director Damon Jang’s Fabulist Theatre has a “mandate,” as declared right on the back page of the playbill for its latest production, Once on this Island.  The company aims to showcase talents of “all races, ages, genders and abilities.”

This eclecticism was reflected in the opening night audience yesterday, many of whom appeared to be relatives of the cast and crew. Jang, the director, did double-duty as a quondam usher, personally presiding over the seating in the half-moon arena of Granville Island’s Red Gate Revue Stage, like the host at a family reunion.

The passion for inclusivity extended beyond the casting, too. Designer Allyson Fournier and carpenter Alasdair Reid crafted an elaborate, multi-tiered set. Props manager juggled a maelstrom of stage flotsam – everything from whole trees and double mattresses to kitchen tools and playing cards. Costume designer Chris Sinosich decked out all the players in a dizzying array of quick-change finery.

All this shoehorned into Red Gate’s cramped performance space. No wonder there was no room left onstage for the five-piece combo that belted out composer Stephen Flaherty’s rather angular score. Instead, music director Amy Gartner had to conduct from behind a piano hidden off in the wings, alongside a second keyboard, a guitar, a bass and an extremely resonant drum set.

The musical ensemble might have gone unseen, but they certainly made themselves heard – particularly percussionist Will Friesen’s vigorous conga drumming. It sure moved the action along and established the Caribbean motif; it also blotted out much of the verbiage in Lynn Ahrens’ book and lyrics.

Never mind – the talented cast managed to bring out the broad outlines of the story and the underlying feelings even without any over-reliance on words. Much of the credit goes to Brianna Clark as Ti Moune, the show’s “Juliet,” who deploys her ample non-verbal skills – singing, dancing and eye-batting – to project a dewy ingénue. She’s still in 12th grade, only, but her charismatic stage presence bodes that we’ll be hearing a lot more from her in future.

Alas, her Romeo turns out to be a bit of a high-caste twit (as rendered with convincing squishiness by Michael Gnansounou). He ditches her in favour of a bitchy debutante (Karliana DeWolff), whereupon our heroine pines away and is reincarnated as a tree, which the chastened islanders celebrate as a sort of a living Maypole in a frenetic finale.

All these karmic adjustments are presided over by a quartet of animist demiurges representing Earth (YooRa Kang), Water (Ricardo Pequenino), Love (Alexandra Quispe) and Death (Sari Rosofsky), respectively. Seniormost cast members Taylor and Marci Chimich portray Ti Moune’s parents with touching tenderness. And, for vague and varied reasons, young Arta Negahban, lithe and expressive, keeps weaving in and out of one scene after another.

Perhaps it’s the Fabulist passion for inclusiveness which dictates that most of these players plus a half-dozen more remain onstage much of the time. All the more credit to choreographer Marion Landers, who kept them from bumping into each other. And to lighting designer Michael Methot, whose swivelling spots mostly managed to pick out the relevant actors from the background crowd.

Once on this Island continues its run through April 14th.