Spamalot brings out the best of Monty Python humour

Part of the Arts Club’s 50th season, Monty Python’s Spamalot is incredibly enjoyable for Python fans as well as the uninitiated. 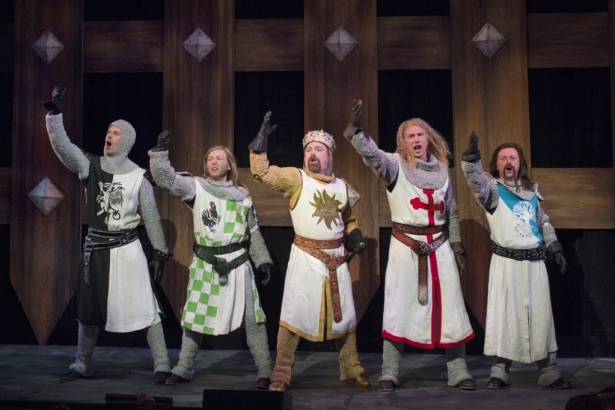 Monty Python is now a globally recognized brand, even though the show has been off the air since 1974. The Python influence and style continues to entice fans, combining slapstick comedy and bodily humour with socio-political digressions and general chaotic silliness. Original Python member Eric Idle has harnessed this successful combination once again, writing the book and lyrics for Spamalot, mounted in Vancouver by the Arts Club Theatre Company.

“I’m not going to mess around with a brand like Monty Python,” said director Dean Paul Gibson, who grew up watching Monty Python’s Flying Circus. The 2005 Broadway production received 14 Tony Award nominations and won three, including Best Musical—and it’s easy to see why. It has been produced across the globe and pokes fun at well-known plays such as Fiddler on the Roof and West Side Story.

Familiar scenes like Bring Out Your Dead, Dennis the Politically-Active Peasant, and the Black Knight had the audience laughing with recollection and familiarity. But when it went a step further than the movie replication, the cast really let loose and had fun. For example, the scene with the French soldiers and the giant Trojan Rabbit devolved into a chaotic chase scene and musical number “Run Away”. And the Knights Who Say Ni! demand something entirely different after receiving their first shrubbery.

In addition to memorable Monty Python scenes, Spamalot mixes in a lot of original numbers, with music by John Du Prez, which parody the Broadway musical genre. “The Song that Goes Like This” sung by Sir Galahad (Jonathan Winsby) and the Lady of the Lake (Terra C. MacLeod) directly mocks The Phantom of the Opera. 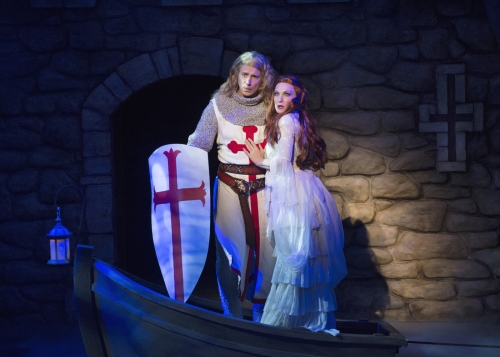 But Andrew Lloyd Webber wasn’t the only target of Spamalot’s parody. The song “Find Your Grail” was set to the familiar music of John Denver’s "Take Me Home, Country Roads", and the Lady of the Lake delivers Fairy Godmother-esque lines from The Wizard of Oz.

The actors did a phenomenal job, playing multiple roles seamlessly, sometimes with multiple costume changes in a single scene. MacLeod as the Lady of the Lake, a character created specifically for the play, got to take a few more liberties with the role than well-known King Arthur (David Marr). MacLeod was spot on, singing “Whatever Happened to My Part?” in Act II and intentionally over-acting. Even Patsy (Andrew Cownden) stopped banging his coconut halves together and performed a Singin’ in the Rain-style number of “Always Look on the Bright Side of Life”.

Two new numbers—“You Won’t Succeed On Broadway” with Josh Epstien as Sir Robin, and “His Name is Lancelot” with Jay Hindle as Lancelot—were complete departures from the movie parody. However, the chaotic rowdy scenes felt perfectly in-line with the Python style.

The set was unique and inventive but with an intentional silliness. Some props resembled creations you would expect to find in an elementary school production. Two ensemble cast members simply rolling a scenery banner between them created a travelling scene backdrop, and a mountain was built out of a staircase platform. Having a live orchestra of six very talented musicians was the cherry on the musical cake.

Monty Python’s Spamalot is part of the Arts Club’s 50th season, and incredibly enjoyable for Python fans as well as the uninitiated. So grab your coconuts, always look on the bright side of life, and grab tickets to see the show before it closes.

The Arts Club Theatre’s Monty Python's Spamalot is playing until June 29 at the Stanley Industrial Alliance Stage (2750 Granville Street, Vancouver, BC). Tickets from $29 at 604-687-1644 or artsclub.com.