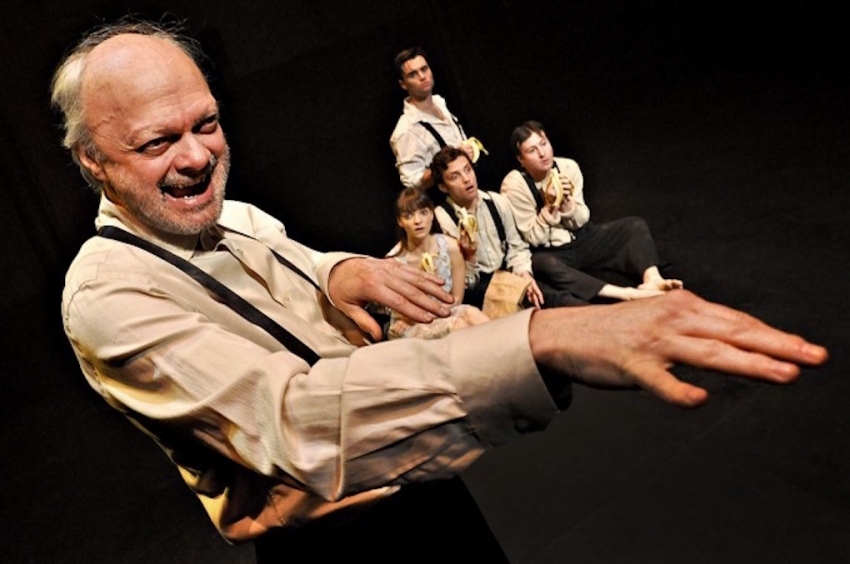 Bundren senior and his deplorable brood -- he's got the whole world in his hands. Photo: Theatre Smith-Gilmour

The characters – at least the male ones – all wear their pants a size too short and held up by suspenders. Most are barefoot. My first thought is “Li’il Abner.” Next comes to mind the white-faced japeries of Marcel Marceau. The last thing I’d expect is high tragedy from a Nobel Laureate.

Yet that’s just what Toronto’s Theatre Smith-Gilmour offers this year’s PuShFest and Arts Club patrons in a powerful and innovative staging of William Faulkner’s As I Lay Dying. Still, the French mime association and hillbilly overtones are not misplaced, either.

The characters are all lumpen Dixie “deplorables.” The locale is not exactly Dogpatch, but its near cousin, Faulkner’s mythopoeic Yoknapatawpha County, Mississippi. And the performance style draws upon the “physical theatre” canons of drama theorist Jacques Lecoq. It was at Lecoq’s Parisian École Internationale de Théâtre that Michele Smith and Dean Gilmour, the Toronto troupe’s eponymous founders and co-directors of As I Lay Dying, first met some 40 years ago.

Physical theatre, with its emphasis on wordless pathognomy, may at first glance seem an odd vehicle to render Faulkner’s Southern gothic landscapes, existential angst and famously convoluted sentences. But how else, after all, to wrestle a 59-chapter novel into a two-hour stage play? How to portray some 15 stream-of-consciousness narrators and a few dozen ancillary characters with just seven actors? How to evoke flood, fire, a honky-tonk bordello and subsistence farmsteads, all with no sets to speak of and hardly any props?

When it comes to stagecraft, the company’s minimalist solutions are brilliantly effective. Lighting designer André du Toit uses a collage of multi-coloured flickering spotlights to achieve such prodigies as a talking corpse amidst a tumbling flood or a heroic rescue from a raging barn fire. He accomplishes 50+ scene changes just by judicious blackouts in which the actors redeploy.

Equally ingenious, set and costume designer Teresa Przybylski allows herself just a single long plank to serve, serially, as a coffin, a wall, a menacing drift-log or the buckboard of a jouncing wagon. She conjures her seven-member cast into dozens of bit players using no more than a collection of false noses and straw hats.

Some crucial plot-points, though, can’t be conveyed with just props or lighting. A semi-wild bronco, for instance. The only way to bring that onstage is to have actor Benjamin Muir play both the fiery mount and its half-tamed rider as a kind of conjoined centaur. Muir’s performance is thrillingly convincing and wholly faithful to his character as the brooding, horse-obsessed middle child of the Bundren family.

All five Bundren siblings – Muir and his two grown-up elder brothers (Eli Ham and Julian de Zotti) as well as a teenage sister (Nina Gilmour) and pre-teen brother (Daniel Roberts) -- are struggling to come to terms with the death of their long-suffering mother.

The eldest son, a master carpenter, copes by methodically crafting a perfect coffin. The youngest then bores breathing holes into the coffin lid, while pondering how his once-living Mom could suddenly turn into a non-living not-Mom. The daughter takes on her mother’s nurturing chores, at the same time frantic to sidestep immanent motherhood herself by ending her own secret pregnancy.

These characters all enact their travails in Yoknapatawpha dialect – presumably their everyday speech – with body language to match. Second brother, though, is different: he glides with an eerie fluidity, knows hidden things by a seemingly telepathic “second sight,” and narrates in a supple language of thought that must be far more sophisticated than his normal spoken idiom.

And those manic eye-rolls! That sardonic cackle! Not to mention his existential maunderings! (A sample: "He cannot empty himself for sleep because he is not what he is and he is what he is not...And since sleep is is-not and rain and wind are was, it is not"). Such quiddities earn his character, Darl, a reputation for madness -- with tragic consequences in the end.

Even the dead mother (Michele Smith) gets her moment in the limelight and a few lines to utter.  As her coffin is being dredged out of a flooded river, amidst the mimed flailing and drowning of her sons, she recounts her loveless, hardscrabble life. It all comes out with a slight French accent – a bit incongruous for a backwoods schoolteacher. But never mind: Smith more than makes up for it with the riveting physical theatre of her death scenes.

Dean Gilmour, on the other hand, has it all – Lecoqian pathognomy and cracker dialect eloquence, both – in the role of the dead woman’s feckless widower. He bullies and wheedles and jives the whole clan and all the neighbours into carting the unembalmed carcass for a week across the flood-ravaged landscape all the way to the county capitol, supposedly to honour his late wife’s wish to be buried alongside her parents there.

There’s something heroic about his tenacity, despite its dreadful cost: one son lamed for life, another clapped away in a Mississippi madhouse, a daughter saddled with an unwanted baby at age 17.

But then, in the final scene, we learn the real subtext of Bundren senior's obsessive quest: to buy himself a set of dentures and remarry to a town floozy. Faulkner knew his country and leaves us with the image of Bundren as a snivelling, paltry icon of Deploristan: “kind of hangdog and proud too.”