Beach party: Beatles meet Bard -- nothing's quite Like It 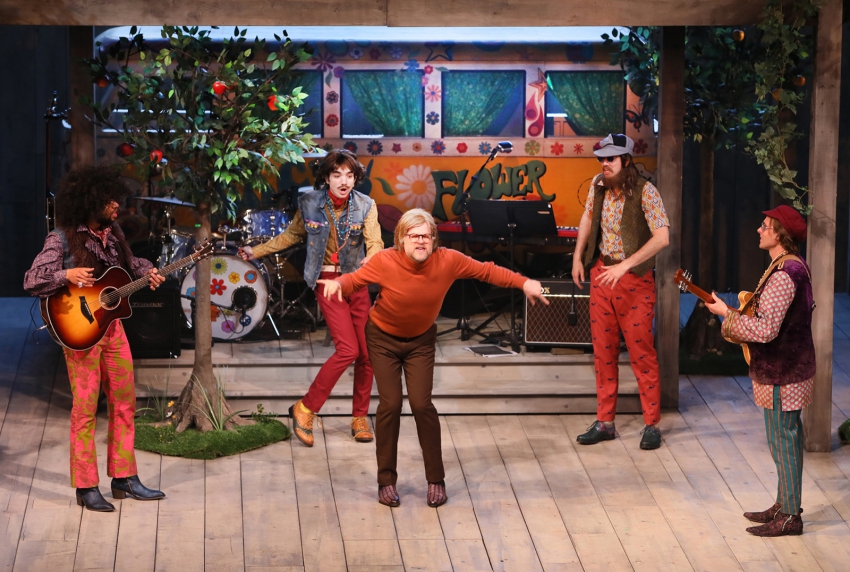 As a leading show biz entrepreneur of his age, Shakespeare aimed to please. It shows in his ribald clown scenes, his fawning prologues and epilogues. Perhaps nowhere is it stated more bluntly than in the title of As You Like It, 2018’s headline mainstage offering at Bard on the Beach (BotB).

Ironic, then, that recent generations (including plenty of us Boomers) grew up choking down their Shakespeare like medicine in our school says. No wonder Festivals like BotB feel the need to tart up his plays with add-on fripperies like song-and-dance extravaganzas, anachronistic period décor, off-label casting and catchy meta-stories.

Purists may balk, but at least these pop versions keep the canon alive and cross-subsidize more classically “worthy” productions like this year’s BotB Macbeth. It can be overdone, though. Per its advance PR descriptions, the latest As You Like It sounded well over the top:

Strange to tell, though, the whole nauseating-sounding melange melds beautifully. Confecting his recipe, director Daryl Cloran deftly factors in a few choice ingredients that are ready to hand. First, there’s a deep pan-Canada pool of polymath performing talent, with actors as adept at crooning and jitterbugging as they are at parsing 16th century English.

Then, too, the texts and the transposed locales are familiar enough to put the whole house at ease. The Fab Four retain a cross-generational appeal that ensures the singability and clappability of their opus to spectators of all ages.

And, more than almost any other Shakespeare play, As You Like It is studded with recognizable phrases (“too much of a good thing,” “all the world’s a stage,” “forever and a day,” “a fool! A motley fool!” & cie. & cie.). These have become everyday, unthreatening clichés, despite their 400-year-old provenance.

But Cloran’s subtlest advantage may be the utter silliness of both the Beatles’ lyrics and Shakespeare’s As You Like It plot. Neither one makes much sense on its own. Each requires a giddy suspension of linear logic. Which ideally suits these two elements to refract each other in some kind of heuristic emotional continuity.

The juxtapositions can be pretty heady, or wildly funny. Who but the gloomy hermit-philosopher Jacques (Ben Carlson) would think to tunelessly recite the gibberish of “I Am the Walrus” as a sort of beatnik poetry? It takes a strapping hayseed like Audrey (Emma Slipp) to slings mincing court jester Touchstone (Kayvon Khoshkam) into a tap-dance duet to the tune of “When I’m 64.”

And no sooner do star-cros’t lovers Rosalind (Lindsey Angell) and Orlando (Nadeem Phillip) lock eyes then they forego their blank verse pentameters to bray out “I Wanna Hold Your Haaaaand!”

Other standout performers: Scott Bellis in his dual role as a pair of estranged brothers vying over a Vancouver dukedom. One is a pinstriped Mafioso usurper; the other a bead- bedecked flowerchild brother, a kind of cross between Ekhart Tolle and Tiny Tim, who dwells in Okanagan exile.

Harveen Sandhu shines as Angell’s loyal sidekick, dancing up a storm and eye-rolling at each new japery of her lovesick coz, at least until she finds herself smitten in her own turn by Orlando’s brother (Craig Erikson).

Luisa Jojic, as Phoebe, bitch-slaps her goofy swain (Ben Elliott) while mooning fruitlessly after young Ganymede, Rosalind’s cross-dressed alterego. All the more impressive that Elliott can take so much slapstick abuse while simultaneously manning guitar and keyboard as the mainstay of the onstage combo in his parallel role as the show’s all-important sound designer/musical director.

Costume designer Carmen Alatorre must have had a lot of fun with period chic. Vancouver characters, male and female alike, all sport trim, elongated fashions, for a slimline, swizzle-stick profile. The Okanagan set is on the whole shaggier, with Dayglo colours and psychedelic moiré patterns as mismatched as possible. Pure eye-candy.

Not exactly Bardic high art, but engagingly energetic. Pretty much anyone’s sure to find something in there that’s As You Like It on one level or another. Altogether (as Celia says early in Act II) “Wonderful, wonderful! … out of all whooping!”