Riding the 'hood with Little Red 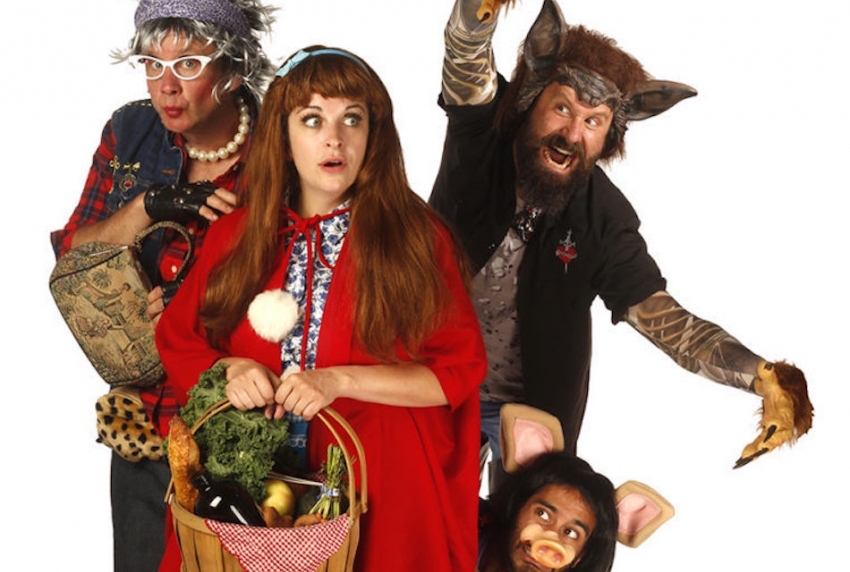 Panto co-stars: the better to Tweet you with, my dear! Photo by Tim Matheson

From The Cultch’s York Theatre on Commercial Drive to the Peace Arch border by bike is barely 49.5 kilometres. Pedal a few more turns (if you can get past the grim guardians of U.S. “Homeland Security”) and you’re already in the Land of the Free.

But what a vast gulf, culturally, yawns between the People’s Republic of Strathcona and the undrained swamps of Trumplandia. With Theatre Replacement’s East Van Panto now rounding on its fourth consecutive Xmas at the York, this year’s edition tunefully skirts its way around that darkening chasm. Might as well whistle while we may.

In line with its zany British antecedents, Vancouver’s home-grown panto is always a preposterous send-up of some canonical fairy tale. This year it’s a bicycle version of Little Red Riding Hood, with Rachel Aberle felicitously cast as the eponymous ingenue.

Her two punctiliously PC Daddies (Chirag Naik and James Long) do their best to shield her from the sheer unpredictable weirdness of her Boundary Road milieu. But as soon as their backs are turned, she points her handlebars down the Adanac Bikeway to deliver a basket of characteristically East Van goodies to her raunchy grandma (Long, again), a lonely S.R.O. shut-in under Gastown’s great glowing “W.”

A hirsute cycle cop (Andrew McNee) nabs her for a helmet violation, but waives the $500 fine and lets her off with a warning to beware the dread Wolf who prowls this stretch of the bikeway. Said wolf promptly appears (McNee, again), along with his porcine hostage/slave (Naik, again), to inveigle both Little Red and Grandma Roxy into his gullet.

They open with a classic Downtown Eastside bike booster’s gambit: first steal her front wheel. Little Red has no choice but to plunge into a bewildering round of barter in the Pigeon Park swap meet, finally recouping her tyre in exchange for a purloined steam clock through the timely intervention of a costumed super-hero, Wheelman (Long, again).

And so it goes, through a flurry of rapid role changes and iconic locales – all thanks to the ingenuity of “costume builder” Darryl Milot and set designer Marshall McMahen. Not to mention “scenic illustrator” Laura Zerebeski, whose backdrop canvasses evoke East Van scenes (plus an interior panorama of wolf guts) with the vivid expressionist palette of an early Chagall.

Rounding out the cast is a three-member professional ensemble (Elizabeth Barrett, Mason Temple and Stephanie Wong), plus fully 15 non-unionized kid actors (mercifully only three of them playing any given night). My grandchildren, seasoned V.O. juvenilia consultants, assured me that the presence of these pint-sized players greatly facilitated the requisite Panto catcalls, cheers and warning shouts from the mostly pre-teen audience.

Still, even with a dedicated children’s director (Yu Raugi) and a pair of student “child wranglers” from SFU, the kiddie cast must have notably compounded the challenges that choreographer Tracey Power handled with such aplomb. Music director Veda Hille, assisted by keyboardist Ben Elliott, kept the tempo upbeat and cleverly spoofed a couple of dozen pop fave numbers by everyone from Gershwin to Bieber, Leonard Cohen to Johnny Cash.

Hille is the most notable holdover from the original creative triumvirate that first brought the Panto to the York in 2013. Founding director Amiel Gladstone has moved on to new projects (including the upcoming musical Onegin in collaboration with Hille). So has the Panto’s veteran scriptwriter, Vancouver’s own leftist enfant terrible Charlie Demers.

He turns in a sly and amiable script, but one can’t help wondering what the more acerbic Demers would have done with these dark times. He bowed out of Little Red (“not my call,” he tweeted) fully half a year before the electoral Trumpocalypse. Hille, in interviews, holds out hope he may return for Panto’s yet to come.