Back-talk from the “differently enabled” 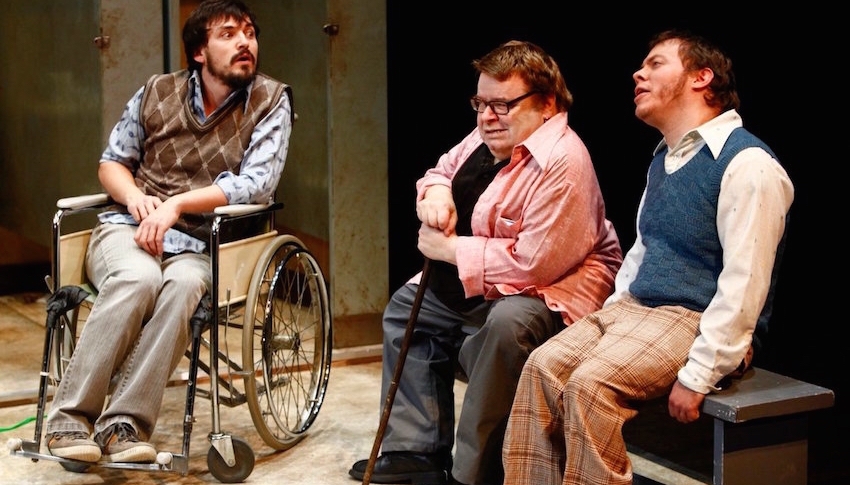 Sitting justices of the Creeps' High Court issue a bench warrant to us all. Photo: Tim Matheson

Filing into the red-plush-and-ormolu jewel box of The Cultch’s Historic Theatre, it's a shock to confront a pair of grimy urinals, a frosted glass door marked “ИƎM,” a slop bucket, a mop closet and two toilet stalls.

Showing beneath one of the stall doors: the tip of a cane and an asymmetric pair of black bluchers. The left shoe sports a two-inch orthopaedic lift sole.

The glass door bangs open and in shuffles actor David Kaye, knees fused together and shoulders hunched. He flushes each urinal in turn, giggling and drooling at every “bawoosh” of the plumbing.

We stand warned: this will not be anyone's idea of a normal anodyne date night at the theatre. Notice is further served when the stall door swings back to reveal the barrel-chested figure of actor Paul Beckett – all four-feet-plus of him – peering owlishly through thick, black-rimmed geek specs.

Rounding out the quorum of palsied Creeps are Brett Harris, as a wheelchair-bound spitfire, and Aaron Roderick, with his fingers fused in an inverted V-for-victory and his chin tucked into chest like a sailor braving a headwind.

Last into the ИƎM’s room is Adam Grant Warren, canted forward on aluminum crutches. He lurches along face first, leading with a beatific smile and fluttering eyelashes – an expression of angelic benignity until we realize that his jaw is frozen in this rictus and his eyes can’t stop involuntarily rolling.

Spoiler alert: only two of these six actors actually suffer from cerebral palsy, but we don’t find that out until the final curtain call. They’ve all been coached so well that – at least for those of us without intimate inside acquaintance with the syndrome – it’s nearly impossible to distinguish the stage performances from the real deal.

So much so that the slurred speech makes the dialogue almost unintelligible, at first. But after a few minutes, once we get used to it, the diction becomes quite transparent – a subliminal process akin to the well-known osmotic Shakespearean acclimatization effect.

And only then can we begin to sense these characters as individual personalities, rather than mere pitiable “cases.” Which is just the recognition they each crave as they chafe under the make-work “jobs” and infantilizing “amusements” provided them in the “sheltered” charity workshop outside the ИƎM’s room door. Hence their retreat into the loo, the sole unmonitored safe space of the establishment.

“Safe,” though, is a relative term. Lauchlin Johnston’s set reflects Creeps’ 1970’s milieu, long before any meaningful “accessibility” mandates. So, just to avail themselves of the toilet facilities, the actors spend a fair amount of time grovelling on the floor, hiking themselves up the stall walls and other such gymnastics.

The bathroom is somewhat of a moral gymnasium, too, where the Creeps convene for mutual support, but also to judge one another – sometimes quite cuttingly.

Harris’ character is the most sardonic of the lot, but also the most readily attackable. Enraged at his body’s own treason in an indifferent world, he flaunts his incontinence to piss on any and everybody, literally as well as figuratively.

At the opposite extreme is Roderick as the workshop’s newbie, an aspiring artist (abstract expressionist, of course) who’s still too naïvely earnest to believe he’s been relegated to a lifetime of folding boxes on a charity dole.

Beckett serves as arbiter and Chief Justice of the ИƎM’s room Creeps’ court, wielding his cane like a sceptre of office as he wryly probes his fellow jurists’ posturings and pretensions while at the same time upholding the dignity of their fellowship.

And then there’s Warren, the conciliator, Teacher’s Pet of the workshop’s charitable sponsors. He’s the major domo of the group’s hotdog-and-ice cream feasts, amusement park visits and other such outings (hilariously parodied in kaleidoscopic telethon-style dream pageant outbursts amidst the ashtray-grey realism of the workshop).

But Warren’s character still fancies himself a budding writer (perhaps a proxy for the late David Freeman, Canadian author of Creeps’ 1971 script, who was himself a cerebral palsy victim). He half convinces himself to join Roderick’s wannabe artist to forsake the workshop in pursuit of creative ambitions in the big world outside.

When their supercilious charity benefactor (David Bloom) stomps into the ИƎM’s room to order them to quit their malingering and get back to work, all five of the Creeps shockingly stand up to The Man and tell him where to get off. But actually flying the coop bodes a rather more daunting challenge.

Director Brian Cochrane paces the production to bring out the black humour of Freeman’s lines while avoiding the twin pitfalls of bathos on the one hand or slapstick on the other. Just the right tone to foster Realwheels Theatre’s declared mission to “deepen audiences’ understanding of the disability experience.”

But this is more than just a 1970’s period play or a disability advocacy piece. The lived experience of the disabled playwright and actors and their sensitively coached supporting cast make for an in-your-face honesty that transcends mere slick stagecraft.

Again quoting the Realwheels manifesto, Creeps becomes a story “in which disability forms the landscape upon which universal issues are debated onstage.” Specifically the issue of marginalized people, anywhere and always, in their irreducible humanity, and their simmering rage.

And that's a cause that’s urgent as ever today.