PuSh back time for strikers and strollers. 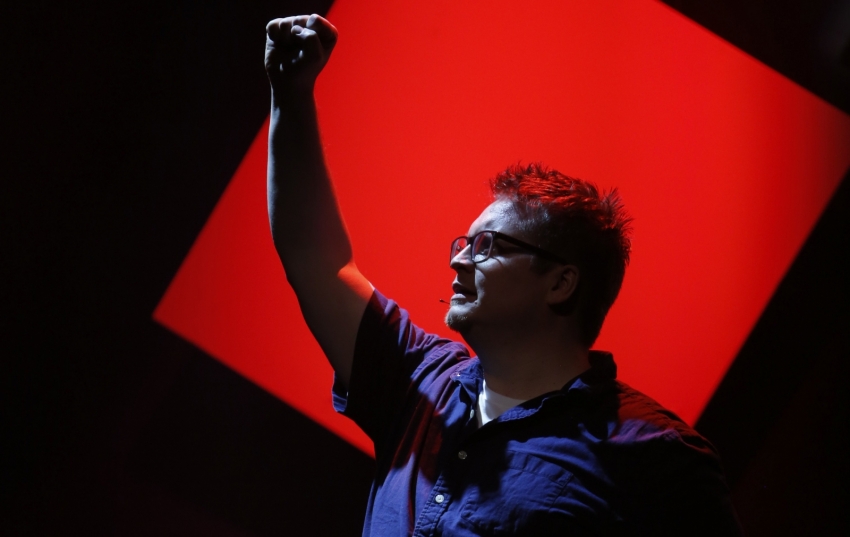 In the dozen years it's been running, the annual PuSh Fest has treated us to performing arts from all over the world. At the same time, it's never scanted our own homegrown talent. This week, two Vancouver institutions -- our edgiest comic and our most outrageous street poet -- seized the PuSh spotlight with solo shows (though the schizoid poet's monologue required a couple of extra bodies). Each was vastly entertaining, but each also packed a polemic punch, a call to consciousness and to action.

The choreographed overture to Charlie Demers' Leftovers at the York Theatre offers all clichéd trappings of Red nostalgia -- the rippling banner, the stark side-lighting, the fiercely aspirational gaze off into the middle distance, the rousing strains of The Internationale. Yet it's a bit of a stretch to take Demers as a "prisoner of starvation." He can't help bursting out of his rumpled black shirt-and-slacks like a Pillsbury dough-boy in Ho Chi-minh pajamas.

After a few heroic poses, he confesses that this whole tableau wasn't his own idea to begin with. His director, Marcus Youssef, put him up to it. Still, he says, it's a price he must pay to transcend stand-up comedy and make it as a serious Theatre Artist. So he offers us a deal: he will sometimes be as funny as a comedian if we, in turn, lend an ear to his earnest political harangues.

He more than holds up his end of the bargain with a succession of deft one-liners and barbed digs at his many bêtes noires. Between gags he also manages to slip in some nuanced class analysis and whirlwind historical recaps. Yet even these Marxist riffs invoke not the grand sweep of historical determinism, but rather the schlub's-eye perspective of his own life experiences and those of his relatives.

So on the three projection screens that hang over the unadorned stage, scenic designer Prajad Sharif intercuts stock historic file photos with odd snapshots from the Demers family album. We see a lot of Demers' mother, a child of the 1950's, nurtured in the then prevalent social democratic consensus. She died young when her eldest son was barely 10. But we also see plenty of Ronald Reagan and Margaret Thatcher. Both came to power in 1980, the year of Charlie Demers' birth, with an avowed mandate to supplant social democracy with neo-liberal plutocracy.