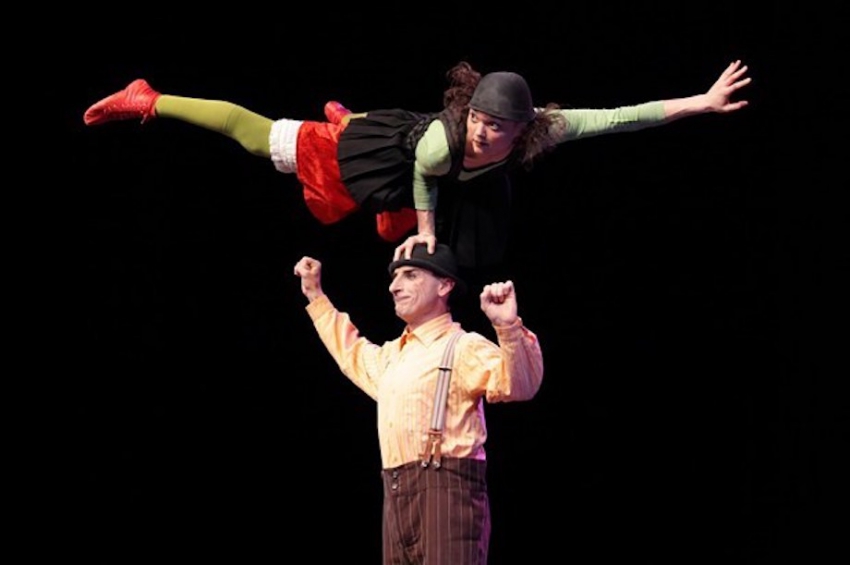 In their Cultch programme notes, comedy duo Camilla Pessi and Simone Fassari of Switzerland’s Compagnia Baccalà offer a hat-tip to the long lineage of genius clowns – Chaplin, Keaton, Jacques Tati and others – who’ve inspired their madcap brand of “physical theatre.” The family resemblance is plain to see in Pss Pss, their wordless, hour-long sketch: the deadpan gravity of the stunts, the touching diffidence of the hapless personae, the improbable pratfalls, near-misses and stunning rebounds.

But, if you check out the “Making Of…” add-ons of a Chaplin, Keaton or Tati DVD, you realize that these masters had vast supporting casts and crews, plus whole studio backlots at their disposal. Pessi and Fassari, on the other hand, have hardly any props: just a ladder, a trapeze, a squeezebox, odd bits of fruit. Mostly, though, all they have to work with is you – their live, real-time spectators.

They take the spotlight with feigned insouciance, squabbling over apples. Then somebody in the audience spooks them with a random cough or shuffle. Suddenly they take stock of the room full of staring strangers and start nervously clutching each other for reassurance. They juggle a few shy, clumsy tosses and, next thing you know, they’re vying for attention with ever-more-outrageous contortions.

These are sad clowns. Shambling onto the York stage in their tatterdemalion frumpery, they look like they might have just drifted up a few blocks from Vancouver’s own downtown eastside. Pessi’s by turns puckish and pouty, with frizzy red pigtails. Fassari’s droopy, slinky and woebegone.

Their whole shtick is precarity; they’re forever just hanging on by a thread. After you’ve seen them miraculously bumble their way through one after another self-made imbroglio, you come to realize they’ll always come out OK in the end. Yet still there’s that little catch of the breath at each new peril.

It’s all in the timing. They stretch out each new conundrum a beat or two longer than you’d have thought possible – just long enough to raise a doubt that this time they might have overreached. After all, they’re tumbling and trapeze swinging without a net. And, in between stunts, they’ve slipped in enough pantomime to somehow enlist your human sympathy for their sad sack personae.

Far be it from me to tip off any of their gags. Just rush to go see them while they’re still in town (through March 4th). They’re every bit as funny and touching as Chaplin, Keating or Tati, but you won’t be able to catch up with them (at least not yet) on Netflix or YouTube.

Because ultimately their lineage is not cinematic. Rather they’re directly descended from the millenia-old tradition of mimes and buskers that have been enthralling live crowds wherever humans might gather.

Be warned, though: if you look sturdy enough to support a dancing acrobat on your shoulders, you’re liable to be pressed into service by the Compagnia. The night we attended, the “volunteer” they dragooned handled his assignment with such aplomb that we almost suspected he was a trained and planted shill.