vACT's upcoming "Kuroko" breaks Shigematsu out of his shell 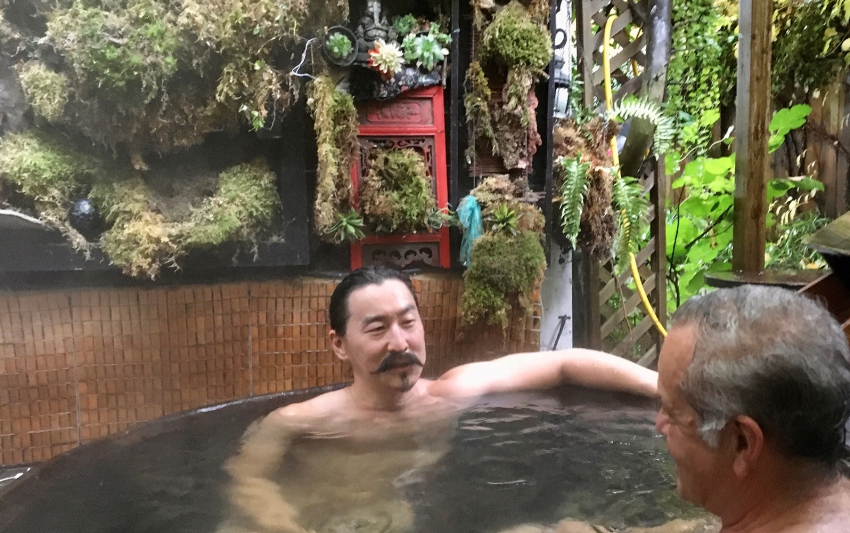 Xtreme cultural journalism: up to the neck in Tetsuro nabe. Photo: Hsu Meilang

Anybody who’s seen writer/director/cineaste/actor/radio host/stand-up comic/scholar Tetsuro Shigematsu, whether onstage in either of his two award-winning multi-media monologues or mingling with the “arts crowd” at many an opening-night gala, knows he’s no nondescript wallflower.

Elaborately courteous – even self-effacing – in manner, he nevertheless cuts a sartorial dash: crisply tailored and ramrod-straight, reflecting the samurai lineage of his Japanese ancestry, his trim goatee offset by a jauntily pomaded moustache. He’s probably the only person I know who can wear a homburg hat without irony.

So that was the persona I anticipated when I asked him around to talk about his new play, Kuroko, which the Vancouver Asian Canadian Theatre (vAct) premieres this week at the Cultch. But, answering the doorbell on a rainy afternoon, instead of the natty bon vivant I’d expected, I found myself face-to-face with a black-clad, rubberized, gauntletted figure in a semi-crouch, peering at me through the narrow eye-slit of a dripping balaclava.

“Who’s this ninja, then?” No ninja, he replied; just a weatherized cross-town electric cyclist, his preferred way of navigating Vancouver these days on his multi-tasking rounds.

But anyway, he explains, the black-on-black mufti we associate with Japan’s stealth ninja warriors did not, in fact, originate with feudal mercenary killers (who, like any savvy assassin, would opt instead for inconspicuous plain-clothes).

Rather it was adopted from a special class of stage-hands, called kuruko (黒子), in the kabuki theatre. They move props, scenery and, often, the gaudily-costumed actors themselves around the set in mid-performance to denote magical effects like disappearance or levitation.

These kuroko dress head-to-toe in black to imply their invisibility. By convention, spectators would discount them much as would a Western puppet show audience ignore a marionette’s strings. The ideograms for kuroko translate literally as “black seed” or, more idiomatically, as a child who is hidden or obscured.

And such a character is at the centre of Tetsuro’s new play: Maya, a Gen Y (or “Satori Generation”) shut-in who hasn’t left her bedroom for the past six years, immersed online in virtual reality. Her parents mutely supply her basic metabolic needs, leaving plates of food and such outside her door.

Nor is she alone in her agoraphobia: the Japanese government estimates that, just in Maya’s 15-39 demographic, there are at least half a million such recluses, called hikikumori (引き籠もり), with untold thousands more in older age groups.

“So Maya’s a ‘dark’ or ‘obscure’ child, alright, hidden from the world,” Tetsuro points out. “But who are the actual kuroko, the invisible stagehands, in her story? Aren’t the parents, for their part, also silent enablers themselves? Not to mention the whole complex of social, cultural and economic stressors that make for this kind of extreme withdrawal.”

But then comes a vintage Tetsurian plot-twist: Maya “meets a mysterious player online who challenges her to the ultimate quest: saving her own father’s life,” according to the play’s vAct program précis,

She does so “by visiting the scariest place IRL, Suicide Forest.” This is a 30 km2 “sea” of gnarled trees (ideal for hangings) on a plateau of eerily sound-absorbent lava rock at the base of volcanic Mount Fuji.

Aokigahara (青木ヶ原), as it is called, has long been held to be haunted, perhaps due to its legacy of consensual euthanasic parricide. In recent decades it’s emerged as one of the world’s leading suicide destinations, too – just the sort of liminal limbo Tetsuro loves best as a dramatic locale.

Researching Kuroko he made a special pilgrimage to Aokigahara – “very evocative; inspiring, in fact.” He didn’t encounter any corpses, spooks, visibly distraught wraiths or even any abandoned personal effects, he reports. The designated trails (in contrast to the all-but-impenetrable surrounding forest) were well-marked and signposted with anti-suicidal public health notices. 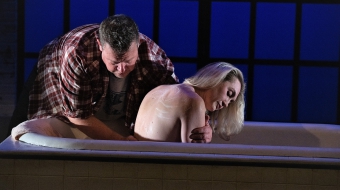