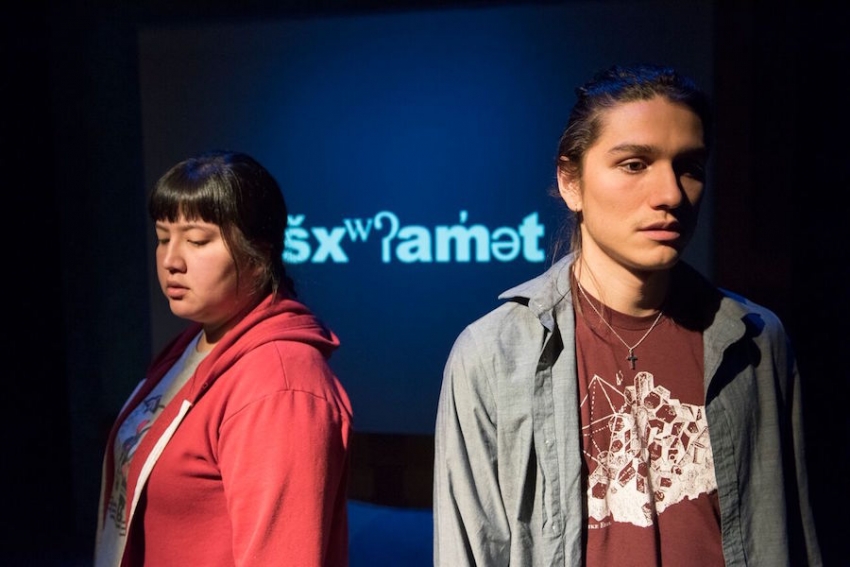 Can we redo history until we get it right? Photo: David Cooper.

Galvanized around First Nations’ leadership role in the Kinder Morgan pipeline fight, a pair of edgy theatre offerings this month confronted Vancouver audiences with the intertwined issues of indigenous rights and environmental justice.

At Richmond’s Gateway Theatre, two production companies – Itsazoo and Savage Society – teamed up to stage a one hour remouillage of Vancouver Observer’s own book-length reportorial compilation, Extract: The Pipeline Wars.

And at the Firehall, David Diamond’s Theatre for Living mounted šxʷʔam̓ət (home), an earnestly provocative psychodrama probing the prospects and pitfalls of Truth and Reconciliation between Canada’s First Nations and the rest of us.

Although it’s been three years in the making, The Pipeline Project retains its up-to-the-minute newsiness with an opening montage of ghoulish Trump footage and headlines denouncing the Trudeau government’s environmental back-pedaling.

Nevertheless, it unremittingly reminds us that this is theatre, not “real life.”

Its three actor/authors – Quelemia Sparrow, a Musqueam activist and self-confessed upper middleclass fashionista; Kevin Loring, who SUV-shuttles between Vancouver stage/screen gigs and the inland N’lakap’amux rez where he was raised; and Sebastien Archibald, an avowed white, male “asshole,” despite his crunchy commitment to environmental and social justice causes – deploy a panoply of self-consciously “stagey” devices.

They buttonhole us with confessional monologues. They depict “meta” scenes of the show’s brainstorming workshops. They circle each other with video cameras for live, real-time telecast on overhead screens. They keep running tallies of the CO2 cost of their own lifestyle choices.

Even Sparrow’s mother – a tart-tongued, chain-smoking Native Land Claims lawyer – puts in a cameo appearance (in the form of a sock puppet) to informatively annotate some historic background.

All this is delivered with technical panache, thanks to a top-flight creative team. Projection wizard Conor Moore serves up a steady stream of video clips that ripple across the textured side screens and even the floor of Lauchlin Johnston’s theatre-in-the-round stage set.

Coordinating all these elements seamlessly, director Chelsea Haberlin also moderates The Pipeline Project’s follow-on “Talk Forward” discussions. After each performance, audience members get a chance to debrief in a Q&A with one of 11 selected environmental activists.

Still, for all the fancy stagecraft, the production draws its punch mainly from the honesty and urgency of the script. Now and then the actors role-play ancillary characters: historic First Nation icons, mealy-mouthed corporate or NEB flak-catchers, irate ranchers in the pipelines’ path.

There’s a tense tick-tock to recap Enbridge’s cataclysmic 2010 Kalamazoo oil-spew. But most of the dialogue is first-person, in the author/actors’ own voices, ranging from self-deprecatory humour to scathing put-downs to rueful introspection.

The zigzag changes of tone, lack of narrative thread and in-your-face artifice of the production keep us from getting too caught up in the onstage action.

That, I suspect, is not a bug but a feature; the “alienation” or “distancing” effect that is a hallmark of Agitpropmeister Bertholt Brecht’s dialectical theatre.

The object is not to enlist empathy, but rather to get the audience to think critically, as a spur to ongoing social and political action.

Stripped of its theatrical integument, the didactic payload of The Pipeline Project seems to boil down to five key points: