PAP Theatre revisits The Dragonfly of Chicoutimi with a twist 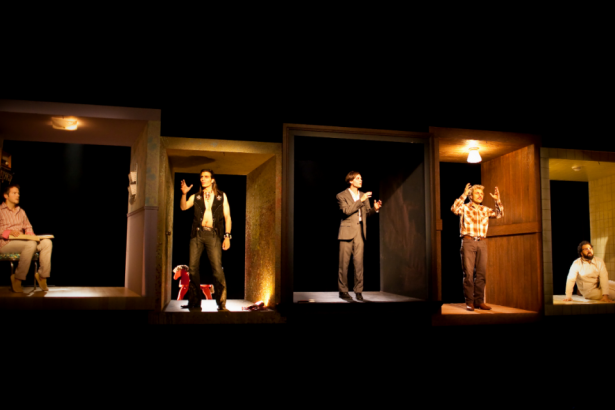 Montreal's celebrated PAP Theatre is bringing a unique version of an iconic Quebec play,The Dragonfly of Chicoutimi, to Vancouver as one of PuSh Festival's main stage performances.

The play, directed by PAP Theatre founder and artistic director Claude Poissant, is based on the work of fellow French-Canadian dramatist Larry Tremblay.

The Dragonfly of Chicoutimi, Tremblay’s first play in English,  is about French-Canadian Gaston Talbot, who narrates the story of his life.

During Gaston's childhood, the death of his best friend causes him to lose his ability to speak. Following a disturbing dream involving his mother and a dragonfly, he finally recovers his voice, but to his surprise he realizes he can only speak in English, filtered through his French thoughts.

The Dragonfly of Chicoutimi examines the loss of identity, and examines the difficulties of bilingualism in Quebec. Despite its intense focus on the English-French divide, the story is universal in its depiction of a struggle between two cultures within an individual.

“I think it's a great time to talk again about this play, about the themes that are in the play, to talk about how we can lose our own culture and how we can keep it  [...] Everybody can feel concerned about it," PAP associate director and actor Patrice Dubois said in a phone interview from Montreal after rehearsals.

Gaston tries repeatedly to start narrating his story  as it were a fairy tale. He uses his detachment from  English language to deliver lies, in an attempt to to reinvent himself as an Anglophone.

The piece became a sensation  after its premiere in May 1995 at Montreal’s Festival de Théâtre des Amériques with actor Jean-Louis Millette as Gaston Talbot on  the eve of the second Quebec referendum.

In this version, Claude Poissant revisits Tremblay’s play in English, bringing to the stage five actors (Dany Boudreault, Daniel Parent, Étienne Pilon, Mani Soleymanlo as well as Dubois himself) to dissect Gaston's troubled mind in five voices. The mix of English spoken language with French syntax, Dubois explained, gives a sort of "musical" quality to it.

The mise en scène is minimalist: each performer  remains inside an individual box, juxtaposed side by side, facing the audience, but without seeing one another. Dubois describes their collective interpretation as “a chorus”  interwoven with equally precise choreography.

PAP Theatre, established in 1978, launched The Dragonfly in 2010 at the  Festival TransAmériques in Montreal.  It will be the first time the company will perform the play in Vancouver.

The Dragonfly of Chicoutimi (75 minutes with no intermission) will show at the SFU’s Goldcorp Centre For The Arts, from Jan 22-25 at 8:00 p.m. For more information, please visit the PuSh Festival website.