One good Mitzvah deserves another 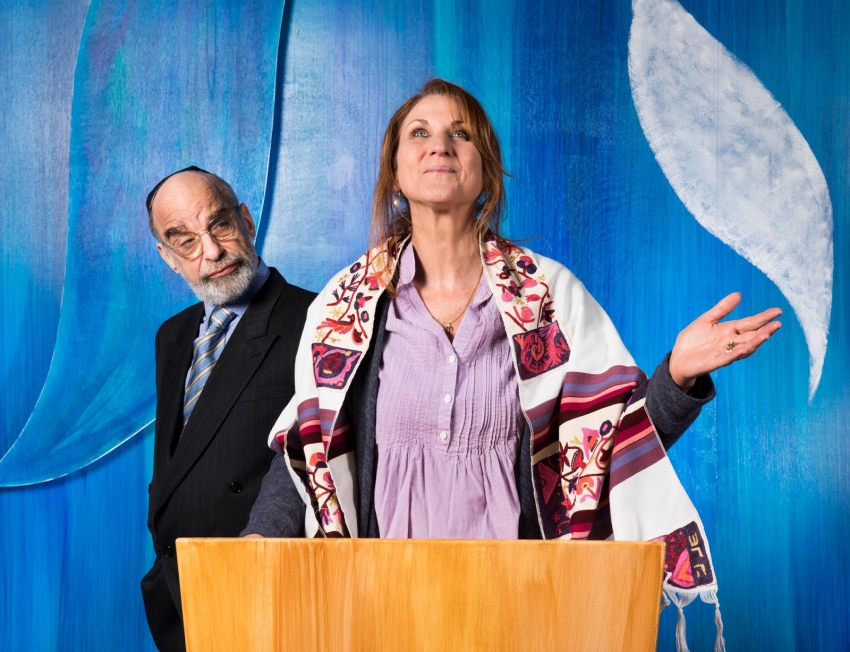 A dying child, a nasty divorce, a crisis of faith; sounds like a million laughs, doesn’t it?

But, with such material, Vancouver’s own ironist-laureate Mark Leiren-Young manages squeeze off a steady stream of zingers. In fact, he keeps us rolling in the close-packed aisles of the intimate church-basement venue where Pacific Theatre (PT) premieres Leiren-Young’s new play, Bar Mitzvah Boy, this month.

Not that we're laughing for the whole 95 minutes of this two-handed tour de force, to be sure. There’s plenty of heartbreak along the way, too, and no shortage of perorations on ethics and epistemology.

We’d expect no less, after all, from Leiren-Young. He’s right up there with the likes of Bernard Shaw in his genius for turning essayistic brain-teasers into almost-plausible dialogue. Remember his prize-winning Shylock? This new play bids fair to become just as much of a repertory staple.

Leiren-Young is a Shaw with a peculiarly Jewish piquancy, tantalisingly sweet-and-sour, like my Bubbeh’s celebrated Brisket. Such complex cookery takes deft hands to bring to table. Director Ian Farthing deploys his players with impeccable pacing and blocking. But it’s the two co-stars that bring the script so vividly to life.

Richard Newman plays a wry, rich, sexagenarian divorce lawyer who decides – more than half a century after dropping out of Hebrew School – that he urgently needs a quickie Bar Mitzvah for himself. Returning to the shul he’d spurned so long ago, he finds it’s now presided over by a young, female Rabbi (Gina Chiarelli).

She’s so hip that costume designer Kaitlin Williams even drapes her in a prayer shawl that’s gaudily embroidered like a Mexican serape. But, against her better judgement, the Rabbi is still persuadable – with a hefty cheque to the synagogue’s building fund – to privately coach the superannuated Bar Mitzvah boy for his upcoming ceremony.

She won’t settle for mere tokenism, though. He’s got to learn all the pertinent prayers and texts, rites and regalia. Not just the forms, either, but also their symbolic import and meaning.

He proves an apt pupil once he realizes that his present tutor is a far cry from the narrow-minded fundamentalism of the Rabbinical bigots he’d encountered as a pre-teen. And he’s all the more receptive when he comes to understand how his new Bar Mitzvah coach has her own – deadly earnest – personal “skin-in-the-game” when it comes to the faith issues at stake in the liturgy and Torah texts under study.

These issues click into focus when the private coaching sessions have to shift venue from her office to his. Matters come to a head when the Rabbi winds up furiously flinging a pink-covered kiddie prayer book from the synagogue pulpit right through a (presumably stained glass) window.

Both offices, as well as the synagogue tabernacle are ingeniously evoked within the narrow confines of PT’s black-box stage in designer Carolyn Rapanos’ minimalist set: just a pulpit, a desk and two chairs; no dividing walls. Plus a few shelves amply stocked with “how-to” manuals and self-help tomes, mostly about sex. It turns out the background reading list for Rabbinical counselling and divorce court have more in common than one might suppose.

Hanging over the pulpit is a stylized glass flame – the ner tamid, or “eternal lamp” that’s a necessary fixture in every shul.  At its core, it’s no more than an orange light bulb, the Rabbi admits. But, denoting the constancy of God and human faith, it must never go out.

It can fluctuate aplenty, though; lighting designer Jillian White minutely synchronizes its flickers and rebounds with every plot turn of the script. The ner tamid almost emerges as a third character onstage, even seemingly chuckling at some of Leiren-Young’s best wisecracks.

And in the end, the lamp – after many a fade – blazes forth in full glory as the two brilliant performers take their bows to a standing ovation. Many in the audience look teary-eyed. Hard to tell whether it’s from laughing at the jokey epigrams or sniffling at the underlying pathos.