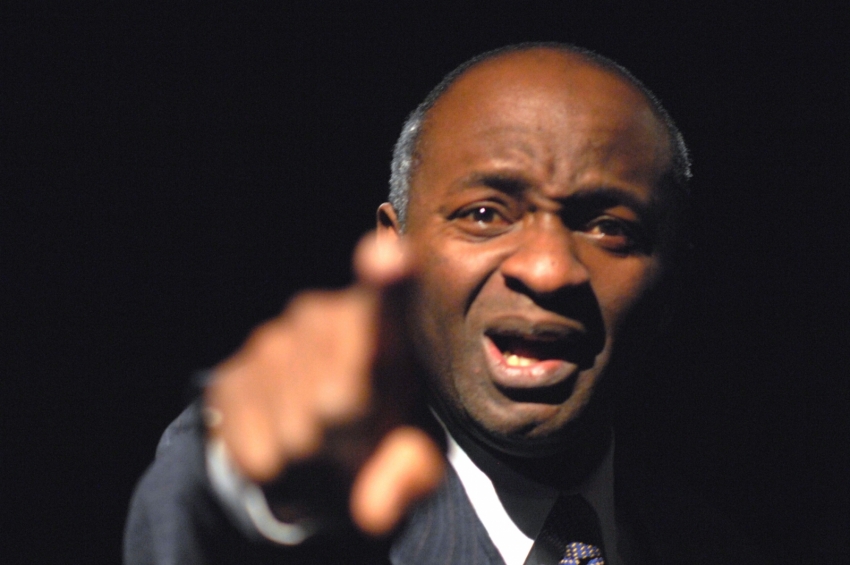 Tayo Aluko tells it like it is. Photo: Stuart Hollis

Amidst coffee and petits fours, guests at the New Westminster Anvil Theatre's opening night reception for Tayo Aluko's one-man show Call Mr. Robeson thrilled repeatedly to the shocking thrum of a sonic boom. The effect was created by a Carsten Nicolai sculpture in the adjacent New Media Gallery that features an intermittent fireball zipping through a propane-filled glass tube at the speed of sound.

The controlled explosion could serve as an apt metaphor for the Aluko show's subject, the Black American singer, actor, civil rights activist and Communist Fellow Traveller Paul Robeson (1898-1974). With his physical charisma, resonant baritone and passionate oratory, Robeson blazed across the cultural firmament for decades before flaming out with a gut-shuddering "pop" in the 1960's-70's.

Starting from his college days as a football star and debate champion, Robeson's imposing physique, wits and voice won him a place in the public eye and in many a fashionable lady's boudoir. He was a natural for that era's duly designated repertoire of acceptable black stage and film roles -- everything from Othello to The Emperor Jones. The ballad Ol' Man River from the 1927 Kern-Hammerstein musical Showboat became his signature song.

Nobody could render Swing Low, Sweet Chariot or Joshua Fit the Battle of Jericho quite so feelingly as Robeson. Never one to take "Negro Spirituals" (as the old songs were then called) at face value as anodyne church music, he rather reveled in them as coded anthems of slave rebellion.

Rebellion came naturally to him; he could never get enough of it. Touring the European concert circuit, he got caught up in the roiling class conflicts that swept the continent between the two World Wars. He came to identify the black experience in America as part and parcel of the age-old struggle of working people worldwide against capitalist exploitation.

He sang benefits for the anti-fascist International 15th Brigade in the Spanish Civil War and eventually relocated his family to Moscow for a few years. Returning to the U.S., he launched a round of patriotic concerts that were right in tune with the fervour of America's last "Good War," the anti-fascist fight against the Axis powers. But he could hardly go on cheer-leading for the anti-Red crusades of the Cold War.

So he soon ran afoul of right wing mobs, the mainstream U.S. press and the Congressional House Un-American Activities Committee (HUAC). Not only was he blacklisted from stage and screen roles in his homeland, but he was also barred from his widespread European fan base after he was stripped of his passport.

With dwindling income, fading celebrity and failing health he survived repeated Congressional inquests, intrusive FBI surveillance, a nervous breakdown and a suicide attempt. By the time he finally got his passport back, it was too late to fulfill his hope of gracefully aging abroad with his long-suffering wife. She unexpectedly succumbed to cancer. He outlived her by another 11 years.

By the time he died, many Americans (and probably most Canadians and Europeans) had already forgotten him. But for those of us that do remember, the name of Robeson still evokes a smoldering stage presence, a haunting voice and soaring rhetoric.

That's not the Robeson that Tayo Aluko chooses to give us, however. For one thing, the Nigerian-born and Liverpool-bred actor doesn't actually look or sound much like the historic Robeson. Then, too, Aluko (who also wrote his own script) seems less interested in presenting Robeson as a spotless icon than as a flawed and suffering human -- and all the more heroic for that.

Aluko starts and ends his 80-minute uninterrupted monologue shuffling onstage as an old and broken man. In between, though, he draws himself up to his full height (in a period-appropriate double-breasted suit with wingtips) for flashbacks about his family life, triumphs and romances.
Aluko faithfully reproduces highlights from Robeson's musical repertoire and his impassioned speeches, including his truculent HUAC testimony.

These he strings together with lengthy biographical and historic recaps. Designer Phil Newman has cluttered his set with props --  flags, framed portraits, books and crates of "top secret" FBI files. Even accompanist Bogdan Dulu's grand piano is festooned with a bright yellow 15th Brigade banner.

The net effect is sometimes a bit labored and contrived, like an animated Black History Month diorama, or maybe a talking Wikipedia entry in show-and-tell format. And the Robeson that emerges can be unnervingly solipsistic, basking in general adulation, unabashedly exploiting his retinue of acolytes and suicidally depressed when he finds himself demoted to the anonymity of a mere "man-in-the-street."

Still, Robeson was unimpeachably courageous in his convictions. And Aluko's unreserved devotion to his subject is so sincere that we can't help sharing, at least a little, in his admiration.

Call Mr. Robeson, running through February 28th, is well worth a Skytrain ride out to New West. So is the Otic Art show featuring that Carsten Nicolai sonic boom sculpture, in the adjacent New Media Gallery.