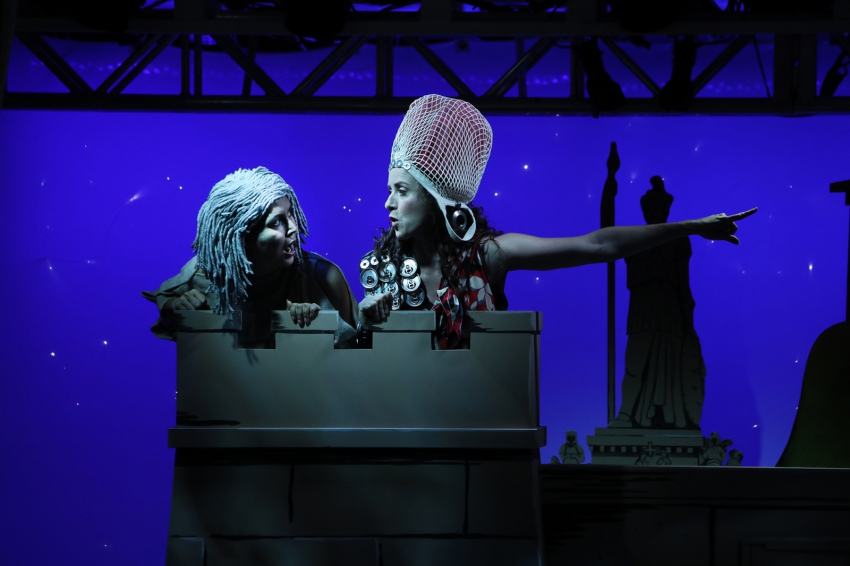 “This is no play; it’s a skit!” That’s the murmured verdict of Constable Sebastien Archibald from his perch amidst the Bard on the Beach (BotB) audience.

He and his patrol-mate, Constable Joel Montgrand, have been kicked off the set of Lysistrata in the Shakespeare Festival’s Howard theatre, as per a union rule that allows only Equity members onstage. So they’re left to cool their gumshoe heels in the bleachers while waiting to collar actress Adele Noronha on a charge of vandalism.

He may be no theatre critic (I’ll have to check with my union if he’s transgressed any of our rules), but the constable has a point. There’s a distinctly skit-like, pastiche quality about the high jinx at the Howard.

Just at the moment, Archibald’s suspect/quarry, Noronha, paces the stage in a plastic helmet with a whiskbroom crest. Brandishing a bright blue, yard-long polyethylene pool noodle phallus, she bemoans her satyriasis in gruffly basso “chest voice.” Others in the nine-member, all-female onstage ensemble cavort about in literal mop-top wigs, toilet-roll headdresses and shower curtain togas.

Costume designer Barbara Clayden’s ad hoc wardrobe improvisations are dictated by a last-minute change of programme. As a flustered BotB artistic director Christopher Gaze just announced at the start of the show, tonight’s intended performance of Hamlet has been pre-empted by a spontaneous cast revolt.

Instead of yet another rehash of some Dead White Male’s wishy-washy indecision and inaction, a pop-up BotB Women’s Collective has “occupied” the theatre for a slap-dash celebration of Lysistrata, a definitively decisive female activist of the 5th century B.C.

What’s triggered actress’ protest is the Port of Vancouver’s decision to obliterate BotB’s harbourside home in Vanier Park and pave it over for a gigantic container terminal. The only way to stop this juggernaut, the Collective is convinced, is through direct action on the model of Aristophanes’ heroine.

Lysistrata (here played by BotB veteran Luisa Jojic) purportedly ended the pointless, decades-long internecine slaughter of the Peloponnesian War by rallying the women of Athens to occupy the Acropolis, site of city-state’s treasury. Her distaff politburo imposed a citywide sex-strike until a treaty was signed.

Director Lois Anderson and her co-adapter Jennifer Wise updated the 2,400-year-old script for contemporary relevance. But the basic storyline didn’t require too much tweaking; daily headlines attest to the ongoing relevance of Lysistrata’s original blue ball strategy right down to our own times.

Which still leaves plenty of scope for other kinds of direct action. Noronha’s tactic of choice is spray-paint “tagging,” as applied to the Port Authority’s container terminal development notice signs – hence the VPD’s vandalism warrant. Michelle Fisk, the ensemble’s senior member, prefers to festoon the harbour billboards with discarded brassieres: “the uplift wiring was killing me.”

Then there’s the production’s Indigenous Consultant, Quelemia Sparrow. Her Musqueam background lends extra authority to her rendering of the customary “unceded territory” show-opener. She’s alert to the keen irony of “occupying” the BotB stage to block conversion of Vanier Park into a container port.

After all, isn’t the Park itself a colonial “occupation” of what was once a thriving Squamish settlement on a flowering meadow and a fecund fishing ground? For her, the most appropriate protest is to offer prayers, reverencing the historic integrity of sən̓aʔqʷ, as the long-gone village was called.

It may be a little raunchy, arch or slapstick for some tastes, but BotB’s 2018 Lysistrata is a charmingly ingenious Matryoshka assembly of nested plays-within-plays. The innermost layer, the original text, is the most studiedly slap-dash, or skit-like.

Such an interpretation might, in fact, be closer to the broad-brush satire of Aristophanes’ City Dionysia productions than some of the more chastely “classical” renderings we now associate with ancient Greek theatre.

The next layer out, the meta-story about the container port expansion and the hijacking of the Howard Stage, although still discernably made-up, feels a little more plausible to modern Vancouverites.

Spoiler alert: Archibald and Montgrand are in fact actors – Equity members, even – rather than duly deputised VPD constables. But they pass among us in convincingly crisp, blue tunics, their belts hung with miscellaneous ordnance, squawk boxes belching intermittent bursts of static. They adlib in credible cop talk and belly up to the concession stands at intermission to cadge their immemorial police perk of free coffee.

Equally credible is the vandalized “redevelopment notice” for the fictive Vanier container port. The sign will be instantly recognizable to anyone who has visited Crab Park lately and scanned the billboards about what Centerm has in store.

As for the outermost layer of the show, there’s plenty of irony but not much room for satire in the moral claims of sən̓aʔqʷ. Sparrow calls us to be mindful not just of the site’s ousted Squamish tenants, but of the whole immemorial web of life that belongs there.

In the end, even Constable Archibald can hear the thrum of the smelt run that once enlivened the sən̓aʔqʷ shore. “That’s the power of theatre,” his senior patrol-mate reminds him. (Montgrand is supposedly married to actress Colleen Wheeler of the pop-up collective, who threatens him that he'll "sleep on the couch" if he goes ahead with the arrest).

So how much “development” is enough? When do we stop “occupying” and start to “reconcile” with the land?

As we file out of the Howard tent, we find the two cops and Noronha hanging around the vandalized development sign, amicably pondering such questions. We’re welcome to join in the discussion.