Notes from the Paris underground 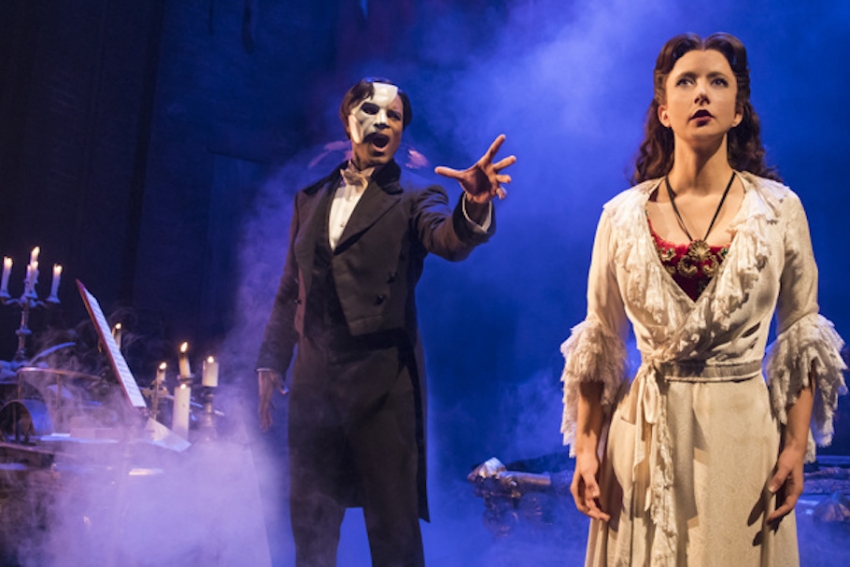 "How do I get to the Palais Garnier?" "Practice!" Photo: Broadway Across Canada

The whiff of popcorn hits you as soon as you file lobby of the QE Theatre. The bathroom queues stretch the length of the mezzanine. The summer-casual crowd, almost 3,000 strong, pretty much packs the house for the Broadway Across Canada touring edition of Andrew Lloyd Weber’s Phantom of the Opera.

It almost feels more like a stadium than a temple of high culture. So how do you get such an audience to sit still for two and a half hours of bel canto?

But, arguably, the real star of the show is the stage itself, a congeries of cantilevered platforms, red-flock drapery, ormolu balustrades, backstage bric-a-brac, painted flats and sombre stonework. The whole set seems constantly in motion, twirling mechanically on a revolving stage or unfurling a matryoshka array of ingenious nested boxes-within-boxes as machine smoke swirls, spotlights pan, torches burst into flame and videos flicker across the gauzy scrims.

That atmosphere of fusty Beaux Arts splendour sustains the tragico-romantic-melodrama of the show’s hybridized, genre-bending storyline. For, despite its still-unchallenged reign as the longest-ever continuous stage run on New York’s Great White Way, Phantom is a far cry from your standard showbiz fare.

In fact it is neither a musical nor a comedy in any traditional sense. Sure, it contains plenty of parodies, sight gags and glitzy production numbers, but in spirit and format it actually has a lot more in common with classic Grand Opera than your typical Broadway blockbuster.

For one thing, there’s practically no spoken dialogue. Rather, the narrative is sung almost continuously in recitatives, solo arias, duets, trios and quartets. This allows us to mainline straight into the “source code” of the characters’ thoughts and moods. In ensemble pieces, we can even simultaneously “mind meld” all the figures in a tableau, free of sequential crosstalk – as close to telepathy as we’re ever likely to get.

Demanding as this may be of an audience, generations of theatre-goers can’t seem to get enough of it. Now rounding on its 31st year on stages worldwide, Phantom has been around long enough that most of the Broadway Across Canada roadshow cast and crew has already racked up experience with the script one place or another.

That includes director Laurence Connor, choreographer Scott Ambler and such leading players as prima diva Trista Moldovan (who featured as Christine in the show’s 10,000th performance on Broadway in 2012 and now gets to play the ingénue’s catty arch-rival, Carlotta).

Curiously enough, though, the current touring production’s headliners, Davis and Travis, are exceptions to this trend, as Phantom neophytes. So is the third vertex of the story’s love triangle, the dashing young Viscount (Jordan Craig) who risks all to rescue his inamorata. He earns high marks for his lithe energy and clarion tenor voice, but stands eclipsed by his two co-stars in their far more nuanced roles.

Travis presents a dewy young innocent who’s forcibly moulded into artistic over-achievement by her uncanny “Angel of Music.” In a ‘Stockholm syndrome’ type trajectory, she convincingly veers from gratitude to horror to a grudging empathy towards her mentor/tormenter.

But it’s Davis who dominates the stage with his bat-like grace, supple voice, haunting face – both masked and unmasked – and sheer physical stature, towering fully a head taller than anyone else. Don’t miss this performance while it’s in town. Phantom continues its Vancouver run at the QE through July 23rd.