Cultch recruits Vancouver audiences into Burkett's Forget Me Not 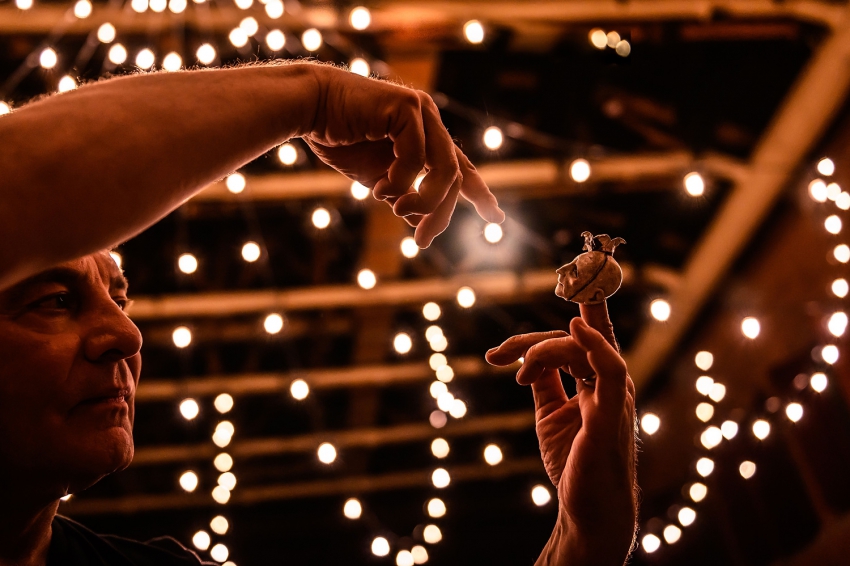 Far be it from me to reveal the Secret Location for the Vancouver presentation of Ronnie Burkett’s puppetry pageant, Forget Me Not, running through February 15th. Suffice it to say when The Cultch goes for a furtive venue, its secrets run deeeeep.

Like two flights of stairs underground and then through a maze of semi-darkened tunnels into a windowless chamber of bare concrete walls. The sort of place where you could conduct a third-degree grilling with nary a squawk nor a thud to be heard upstairs. (Apt for the locale, as attendees will learn when they get there).

To mellow the brutalist décor, the ceiling is strung with softly glowing vintage lightbulbs. Yellow legal pad sheets dangle down from the wires like translucent stalactites, just barely too high to make out what’s handwritten on them in a tidy cursive script.

The floor is strews with a random assortment of loveseats, Morris chairs, picnic benches, hassocks, fainting couches, chaise lounges inter alia, all at crazy angles surrounding a few wheeled plywood chests. Sit where you will; no assigned places. You won’t stay seated for long, anyway.

Without preamble, Burkett emerges from somewhere in the riot of eclectic upholstery. He’s in a whitish, hooded cowl, face masked, gesticulating with hot pink debutante gloves and declaiming, in rhyming hexameters, the saga of a storybook knight who drowns in full armor when he’s wrong-footed while trying to present a nosegay to his lady love.

Quite what this has to do with anything else in the show is never made clear, but never mind. It sets the romantic, tragi-farcical tone for the evening, and we willingly surrender our logical, critical faculties. No time for such fripperies tonight; we have work cut out for us.

Anyone who’s seen a Burkett production (and he’s done dozens over his half-century career as a professional adult puppeteer, including his hardy perennial Christmas roadshow, Little Dickens) already knows his characteristic tropes. He remains visible throughout, manipulating his own hand-crafted homunculi and voicing all the characters using only timbre, accents and tone, with no recourse to falsetto or Voicemod tech. Count on Burkett to routinely dragoon a few audience “volunteers” as animate (and gently jibed) stage props.

But in Forget Me Not, he carries this modus operandi to its logical conclusion, recruiting his entire audience – 100-plus ambulatory fans – to follow along as he traipses from one to another of his puppet caches to enact his leading characters.

From a bathtub-sized bin, we each select a one-of-a-kind glove puppet that we’ll use to collectively celebrate or bewail each plot-twist en masse like a mutely thronging Greek chorus. Some of us even pick up hand-held electric torches, which act as ad hoc spots or strobes to provide the only stage lighting. Now and then, when Burkett barks “Maestro, music!,” whichever audience member is closest to the show’s retro hi-fi sound system gets to plop the next in a serried sequence of discs onto the turntable and set the needle in the groove.

Burkett’s not shy about barking orders. Beginning his show in media res, he dispenses with customary land acknowledgements and sponsor kudos, but he’s vehement about his shut-the-cellphone injunction: “Kill them! They’re out to get you, to take over everything!” or words to that effect. Nor is this mere hyper-ventilation; it’s a core premise of his story.

Forget Me Not posits a tech-addled near future (or is it an already far-gone present?) in which practically everyone has forgotten how to read or write anything emotionally meaningful. Yet hearts still hanker after one another, so people still need a kind of priestess/crone (Burkett’s protagonist) who somehow retains the lost, dark art of encoding and decoding human sentiment in writing. Like many an oracle, she’s handicapped herself, thwarted in her own first love and so uniquely suited (condemned?) to act as everyone else’s romantic spirit-medium.

Alongside this poignant plot-line, for comic relief, we’re offered a side story about a braggadocious carnie whose doofus catamite/sidekick dies. (In our puppet avatars, we’re all recruited as mourners or pall-bearers). So he has to annex himself to a passing circus troupe, where he meets and falls head over heels for a buxom tattooed lady. She reciprocates his passion so fervently that she inks a love poem to him right on her back – a crime so out of tune with the times that she has to conceal herself in a dancing bear suit for their nuptials. (Still with me? Don’t try too hard to sort it all out logically; it won’t work and doesn’t matter).

The whole audience forms a puppet conga line to dance at the wedding, but our joy is shattered when a puppet constable – a grotesque pastiche of a classic Mister Punch – wades in to slapstick her to death. At which point all 100+ of us Greek choristers hang our little pasteboard heads in grief, with an admixture of shame that none of us stepped up to intervene. Genuine tears bedewed a few of the amateur audience puppeteers, I noticed.

But Burkett spares little time for bathos. He has us all fondly restore our puppet avatars to their travelling trunk, then briskly wraps up the show by converging the two plot lines. Turns out, you see, that the child of the carnie’s love-match survived the tattooed lady’s demise to ripen into the letter-writing priestess crone.

And, before we have time to tease out all the implied paradoxes, Burkett merges back into the crowd and slips out of his own ovation via some back channel of the Secret Location, leaving his flummoxed fans to stand there applauding each other.

After everybody's filed out, I finally get a chance to climb up on one of the ormolu chairs and inspect some of the dangling yellow sheets of text. I realize I’m looking at the hand-written first draft of Forget Me Not, spelled out in confident cursive with impressively few backtracks or revisions, like a manuscript of Mozart's. Seems Burkett himself is sort of a spirit-medium in his own right, a last bastion of poetic sentimentalism in a windowless, brutalist world.