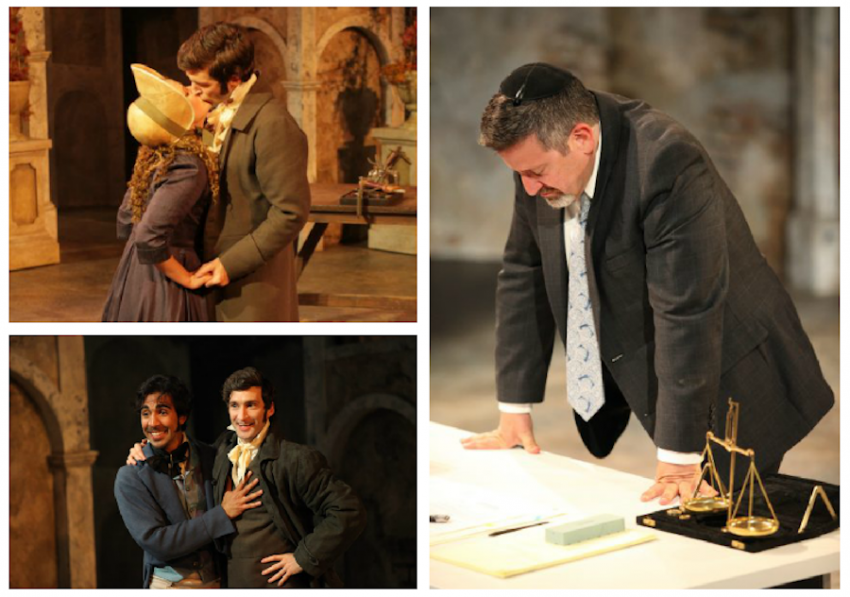 Shakespeare well knew that the richest of prizes often come wrapped in less ostentatious packages. That’s the set-up behind the marriage lottery shell game for the hand (and dowry) of the orphaned heiress, Portia, in The Merchant of Venice.

Suitors are presented with three caskets made of gold, silver and lead, respectively. Only one contains the winning ticket. Popinjay princes bet on the precious metals. They guess wrong and slink off in chagrin.

But Portia’s chosen heartthrob, Venetian man-about-town Bassanio, won’t be “deceived with ornament.” He wins out by shunning “gaudy gold” and the “common drudge” of silver, opting instead for “meagre lead…[whose] paleness moves me more than eloquence.

“And here choose I; joy be the consequence!”

If you’re heading for Bard on the Beach, take to heart the lesson of the caskets. Worthy as they are, this year’s high-gloss Mainstage productions are handily eclipsed by a pair of brilliant offerings in the more modest “black-box” sideshow tent of the Howard Family Stage: the aforementioned Merchant plus Two Gentlemen of Verona.

Take them both in; joy will be the consequence.

The two Howard shows have a lot in common. Both are set in Italy, both tell tales of best-bro buddies, parlous courtships, betrayals, vendettas and “sting” operations by cross-dressing ingénues to entrap their errant swains. Despite their dark overtones, both are classed as “comedies” – whatever that may mean – at least according to the Jacobean taxonomies of the First Folio.

These commonalities, plus the Festival’s scheduling and funding exigencies, prescribe an overlap of resources between the two shows. They share a vastly talented cast of a dozen or so actors, most locally recruited. And they both make use of scenic designer Marshall McMahen’s flexible backdrop of generically cinquecento towers, intercut with narrow alleys that serve as entry and exit “wings.”

That lends the production a tremendous immediacy, allowing players to burst straight onto the three-quarter-round floor-level “stage” where the action laps right at the feet of front-row groundlings.

The blank towers are pierced with narrow casements that, when open, serve as side stages. When shuttered, they serve as a screen where Adrian Muir, lighting designer for both plays, projects chiaroscuro videos that denote shifts of locale and mood.

And both fulfill the tenets of comedy, as conceived by 16th century authors and audiences, Renaissance minds freshly reacquainted with classical dramaturgy. Comedy, according to Aristotle, traces its origin to the comus (Κῶμος), ancient Greece’s customary troupe of rowdy male yokels who, with lewd japes and costumes, would parade a giant phallus-effigy from village to village to welcome the orgiastic prospects of the annual grape harvest vinification.

By the time of Good Queen Bess, the notion of comedy had been toned down to denote any play that, overcoming obstacles, culminates in marriage[s]. But the phallic overtones of fertility celebration still remain.

Such are the comedic premises underlying both Merchant and Two Gents. The resulting storylines may strike modern viewers as funny ha-ha, or funny peculiar or unfunny altogether. But patriarchy is always taken as a given.

Still, notwithstanding all their overlaps and parallels, Bard’s two 2017 black-box productions feel very different. Director Scott Bellis opts for a period rendition of Two Gents (although the period he’s chosen turns out to be the Romantic 1800’s, rather than Shakespeare’s own Elizabethan milieu).

Costume designer Mara Gottler obliges with an array of pre-Raphaelite tropes: damasked grandees for Milan, stolid burghers for Verona and moustachioed banditti (with suspiciously squeaky voices) for the limbo scenes in the intervening forest. And composer Julie Casselman scores accordingly, with quotations from the likes of Grieg and Brahms interspersed with her own rhythmic sound collages.