Sleuthing out hearts intestate in "The Ones We Leave Behind" @ Cultch 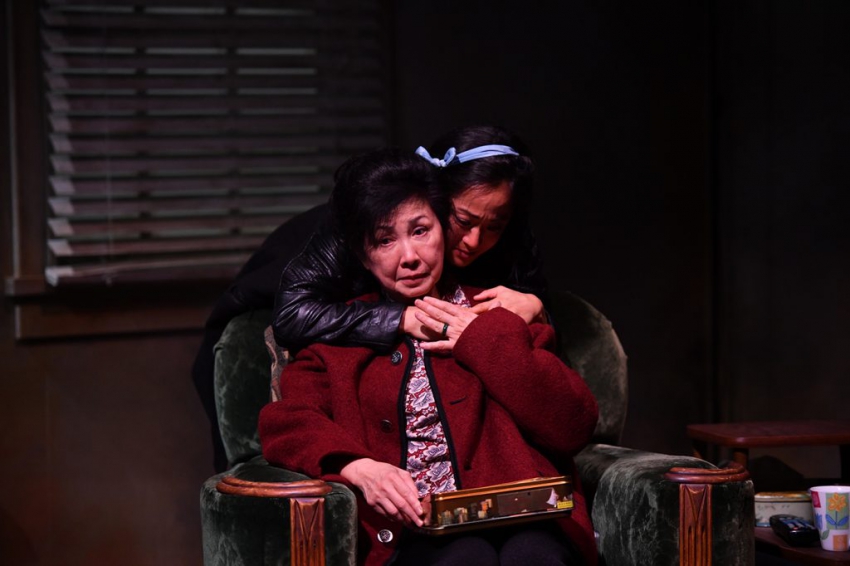 Once upon an armchair. Photo: Ray Shum

Even before the action begins, the Hitchcock allusion is uncanny. Barely two metres from my front row seat in the Cultch’s curtainless, open-plan Historic Theatre, a deathly still figure slumps in an armchair, her back to us so that all we can see is her steel grey chignon.

It’s a shameless allusion to the mummy scene in Psycho, so I steel myself for a screaming panic. But then the overhead spots fade and, in the blackness, the figure bounds silently away.

Still, when the lights come back up, the film noir aesthetic continues. It’s baked right into the peeling plaster and thrift store chic of Pam Johnson’s one room stage set, the slatted moirés of Gerald King’s side lighting and the moody sax-and-siren ruminations of Dorothy Dittrich’s background soundtrack.

In this world premiere production, director John Cooper infuses Loretta Seto’s script, The Ones We Leave Behind, with all the tropes of a police procedural. True to the genre, the play opens with a pair of investigators, glamorously ingenuous Abby (Agnes Tong) and her wearily hard-boiled partner/supervisor (Jimmy Yi). They’re scrounging for clues at the scene of an enigmatic death.

Except these are no police detectives; they’re bureaucrats from the provincial Public Trustee administration. And the case involves no suspicion of foul play; just the conundrum of how the intestate body-in-question could have mouldered undetected in a lonely apartment for nearly half a year with nobody to check in on her and no trace of any surviving friends or family.

Well, that’s just how it goes, as far as the cynical veteran investigator is concerned. Even after finding an address book full of defunct contacts and a bankbook worth over half a million bucks, he’s still pegged the late, unlamented stiff as a solitary sourpuss.

But the truculent newbie can’t so readily dismiss the old lady. She’s stumbled upon a diary, which, while providing no concretely actionable leads, is full of intriguing lacunae and meditative paeans that bespeak an eventful inner life. It develops into an obsession that the young caseworker carries home with her.

Not that Abby’s home life’s without domestic problems of its own. There’s a doting boyfriend (Brahm Taylor), a shy paramedic who’s all set to “pop the question” that she’s not yet ready to answer. Her indecision has a lot to do with her Chinese immigrant father who went missing when she was just four, leaving her without a male role model or enough sense of her own genetic makeup to contemplate marriage.

In probing the mystery of the absentee Dad, she gets scant help from her mother (Alannah Ong) a crusty old chain-smoker who buffers herself against the world with a non-stop stream of Cantonese TV. Whenever the subject of Dad comes up, Mom just sinks deeper into her armchair and dials up the volume on the tube.

What, she shrugs, is to talk about? Your father, like all men, no good. Same like your ambulance-driver boyfriend. Selfish; don’t care about us. That’s all.

As unwelcome as the mother’s stonewalling is her (non-Chinese) boyfriend’s overeager solicitude about the Daddy question. So unwelcome that Abby instigates blow-ups with each of them and stomps out of their respective apartments, purportedly never to return.

But just then there’s a breakthrough in the Case of the Lonely Diarist. While trawling through the old lady’s phone contacts, she turns up an out-of-wedlock son who was born during one of the gaps in the journal and adopted by a friend who is long since estranged and now deceased.

The grown up son (Josh Drebit) wants nothing to do with the birth mother who abandoned him, notwithstanding that unclaimed bankbook and Abby’s earnest efforts to allay his resentment. By this point, the show has already shed a lot of its noir trappings and taken on some of the episodic flicker of a family soap opera on daytime TV.

And then we gear up for a bittersweet, sentimental ending en couleur de rose. A near-death medical emergency brings Abby to her mother’s hospital bedside, where she reencounters her ex- in his capacity as EMT and Platonically loyal friend.

In the aftermath Mom unearths a cache of homesick letters that the absentee Dad sent from his own ailing parents’ bedsides in China. He’s held there by ties of Confucian obligation, even as he he pines for wife and child back in Canada. Without getting into spoiler details, these revelations bring the play to an upbeat conclusion of reconciliations all around.

The two female leads make a convincing mother-daughter pair, brittle and prickly and ever ready to cut off a nose to spite a face. Of the two, Ong has the easier role, nearly stealing the scene with a string of comedic guilt-tripping Mama tropes that she’s perfected over decades as a character actor on the Hong Kong stage and screen.

Tong’s role is trickier. It would be all too easy for her to come off as bratty, impetuous and self-pitying. But her endgame turnaround is entirely convincing, as is her romantic chemistry with her boyfriend (rehearsed, no doubt, in her recent real-life, offstage marriage to Taylor).

With a script and two starring performances by ethnically Chinese women, not to mention a Korean-Canadian male in an impressive supporting role, The Ones We Leave Behind attests to the success of its producing company, the Vancouver Asian Community Theatre (VACT), as a talent incubator.

But there’s really not much about the play that absolutely has to be Asian. In the end it delivers a universal message that can be transposed to any culture: a cautionary tale about nursing a grievance to stunt oneself. Only when we abandon our sense of abandonment are we no longer Left Behind. A meaningful tale, touchingly told.