Nassim wants to get fresh with you 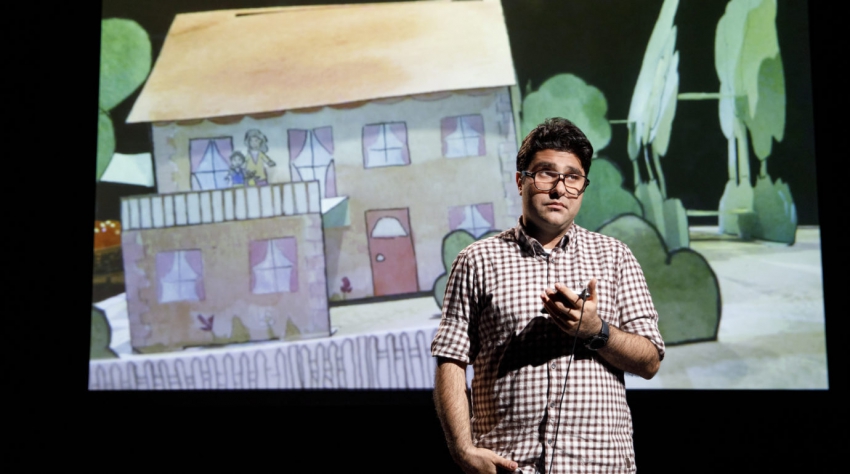 If you’ve ever learned a foreign language as an adult – and your teacher was any good – you might remember the experience, in part at least, as a process of pleasurable re-infantilization.

You place yourself, unashamedly clueless, in the hands of a bemused and kindly grown-up who spoon-feeds you basic vocabulary, forgives your phonemic outrages and applauds your every half-assed attempt to cobble together even a simplest Subject-Verb-Object sentence.

And, along with all the lexemes, morphemes and S-V-O’s, you glean a few ethnographic tidbits, by way of background, about where the language comes from. So much the batter if your mentor shows at least a polite interest in reciprocally learning a smattering of your own language, manners and mores.

That’s the basic formula of Nassim, a genre-busting, semi-autobiographical, demi-improv, multi-media, audience-participation farrago that runs now through May 19th at The Cultch.  All very soothing, if a bit mannered – a cozy little cross-cultural nursery of fundamental human connection that transcends all borders.

Playwright Nassim Soleimanpour, 38, is no fan of borders. In his late 20’s, he was confined within the borders of his native Iran for refusing military service. That didn’t stop his early play, White Rabbit, Red Rabbit, from becoming a worldwide sensation, by now translated into 20 languages.

An international “array of A-list actors” (as described by Wikipedia) leapt into the breach, with a different star each night encountering the absurdist script for the first time. This serendipitous unpredictability “keeps the material fresh,” says Soleimanpour, making a virtue of a necessity.

So, to stay fresh, he’s maintained the unrehearsed format for his latest play, Nassim. Wherever the show makes a landing, local headliners confront the script, sight unseen, for the first time. For its Vancouver run, he’s recruited a dozen of our own A-listers who, given their diversity, can be counted on to wring very different nuances out of the material, night after night.

At least now, though, the playwright gets to accompany his script. In fact he appears, as a wry and voiceless presence, in the title role, shuffling page after page of his script via an overhead projector onto an upstage screen for his guest actor (and audience) to read.

Until the very last, Soleimanpour “speaks” to us only in gestures, italicised stage directions, family snapshots and bright-hued kids’-lit rebus pictures. Plus we get to admire overhead projections of his hard-earned Iranian passport and a little notebook of foreign vocubulary he’s learned from audience members in the course of the show’s half-year worldwide run to date – entries in German, Korean Hangul and Chinese, as well as numerous iterations of the word “Impeachment” from Nassim’s New York engagement.

Globe-trotting celebrity has made him no fonder of sovereign nation states. To first set foot in North America last year, he had to fill out some 1,500-odd pps of paperwork in the face of Trump’s attempted Muslim ban – nearly three times the page count of Nassim’s 456-pps script. A lot denser, too; most of the script pages flitting through his onstage overhead projector contain just a few punchy lines, for maximum laughs or pathos.

And, somehow along the way, we do manage to pick up the odd phrase or two of Farsi through the comforting medium of Dick-and-Jane sentence structure. Enough, at least, to carry on a sentimental little Skype dialogue (via our onstage A-list surrogate) with Soleimanpour’s Mumun (mother) back home.

She still manages to sound twinkly and…well, fresh…after what must be recurrent phone calls from alien theatre-goers during the wee morning hours of her Teheran time zone.

By Day Two after seeing Nassim, I must confess, I could no longer utter the phrase in Farsi. But I can still recall the haunting literal translation of the Persian idiom for “I miss you” – the heart crumples.