Toe-tapping beats, a nostalgic song list, and the incredibly talented cast made this an enjoyable summer performance, but overall lacked a clear story arc. 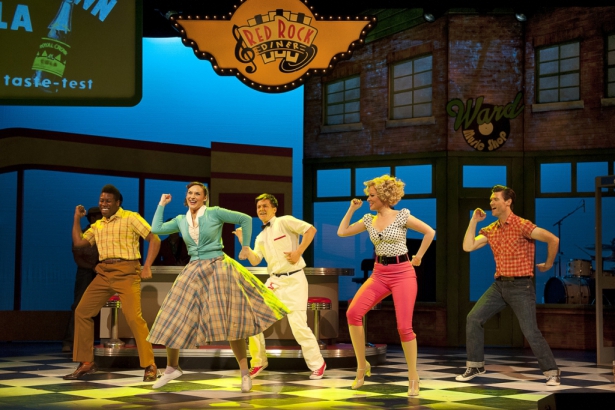 Every scene of 'Red Rock Diner' is filled with high-energy music and dance—a testament to the talents of the cast and band. Photo credit: Emily Cooper

Red is known as the first DJ in Canada to play rock ‘n’ roll music on regular rotation and began his DJ career while he was still in high school in 1954. Red Rock Diner focuses on 1957 when Red (played by Neil Minor) was a DJ for Vancouver Top 40 radio giant, CKWX. But any story about the five teens is completely overshadowed by the pacing of the song and dance. Every scene of the show is filled with high-energy music and dance, which is certainly a testament to the talents of the cast and band. 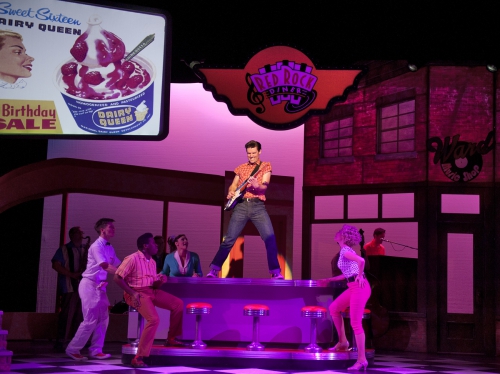 Zachary Stevenson, who also played the title role in Buddy: The Buddy Holly Story for the Arts Club, steps in on both guitar and saxophone during the show. As the requisite greaser, Stevenson also croons in an Elvis medley and “Great Balls of Fire”. Colin Sheen, as the ‘square’, is a Capilano University grad and yo-yo master. Sheen received thunderous applause after his solo of the heart-wrenching ballad “Cry” by Johnnie Ray.

The only two women in the cast—Anna Kuman and Robyn Wallis—were pegged into good-girl and bad-girl roles, respectively, and while talented vocalists, they were offered very little development outside those stereotypes. Ontario-native Tafari Anthony thrilled the audience with a medley of Little Richard songs as part of the High School graduation talent contest in Act II.

When the five teens (whose names are only known if you read your show program) weren’t performing lead on a song, they were singing backup or dancing. Even the multi-talented ensemble stepped in to sing and dance at various points. 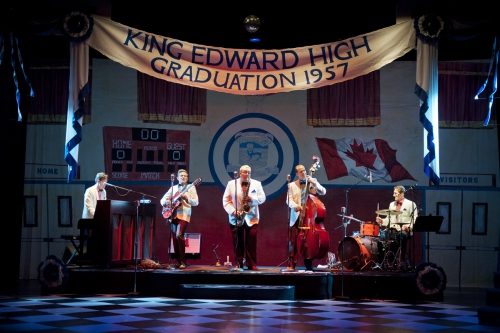 During his career, Red Robinson met numerous rock ‘n’ roll legends such as Elvis Prestley, Ray Charles, The Beatles, Jerry Lee Lewis, Little Richard, and Buddy Holly—several of whose songs were performed during the show. There was some awkward audience participation followed by an equally out-of-place walk down memory lane near the end of the second act. With no apparent story arc in what was essentially a mix tape of the fifties, the show has difficulty determining where to stop.

The set design and projected images featured nuggets of Vancouver history, including vintage advertisements for White Spot, the Vancouver Mounties baseball team, and Trev Deely Motorcycles. And Neil Minor, as the local legend, captured Red's silly banter and on-air gags throughout the first act. But with little context, these historic tidbits fell flat and left the feeling of a 50s-era variety show telethon.

The toe-tapping beats, nostalgic song list, and stellar talent made this an enjoyable and casual summer outing, but with little lasting substance.

Red Rock Diner is an Arts Club production, directed and choreographed by Valerie Easton, at the Granville Island Stage (1585 Johnston St., Vancouver) from June 19 to August 2, 2014. Tickets available via 604-687-1644 and artsclub.com.