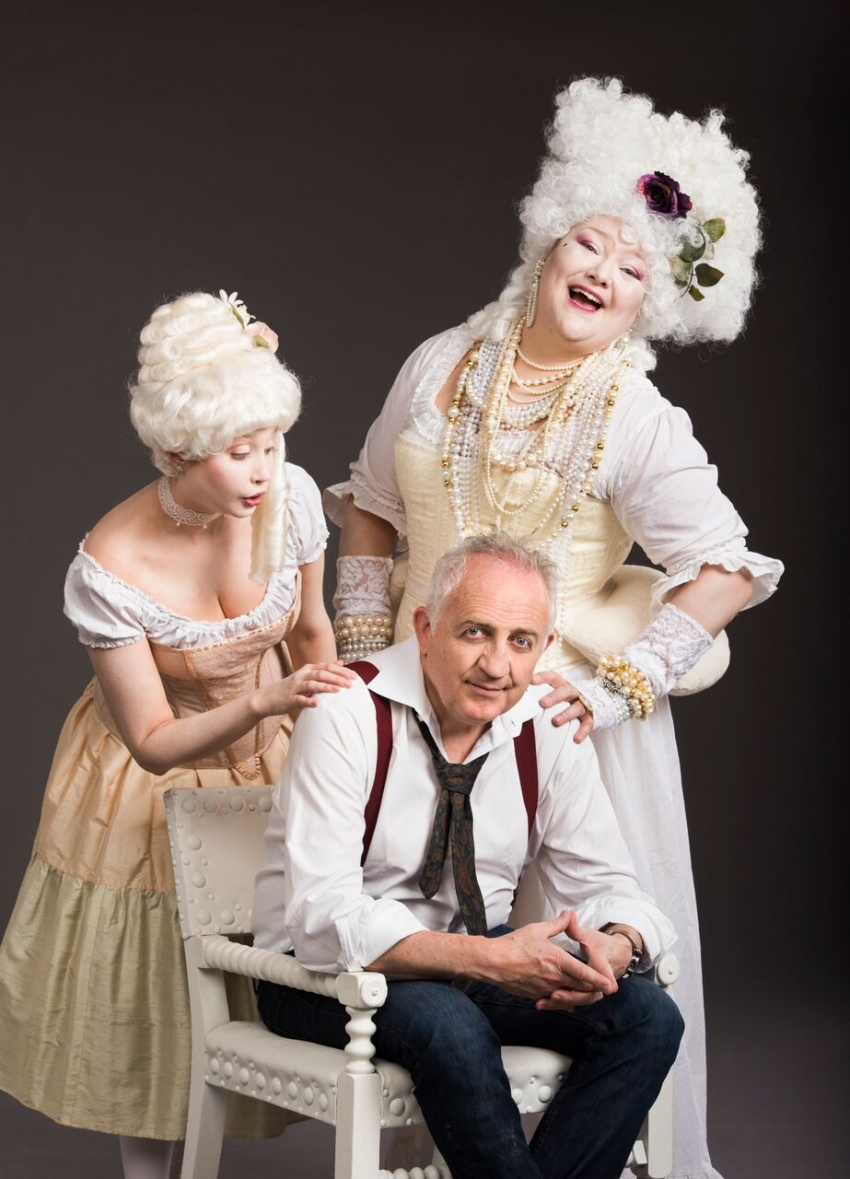 Some music is just too good to leave stuck in Limbo. Vintage Mozart operas, for instance, from the peak period of the composer’s creative life.

Especially when they’re advocated by a septet of ectoplasmic divas (and divos) who’ve been rehearsing these scores in Limbo for the past 230+ years, waiting for their moment in the footlights before a live, real-world audience.

Such, anyway, is the premise of the latest offering from the City Opera of Vancouver (COV, or simply “O!,” as the troupe styles itself in its logo). “Lost Operas” represents the company’s maiden venture into the Mozart canon, and its first-ever comedy; heretofore O! made its name with such weighty commissions as Fallujah and Pauline.

There are those, though, for whom mere Mozartian provenance might not be reason enough for an opera’s resurrection. Vancouver Symphony conductor Bramwell Tovey, for one. Sure, he grudgingly concedes, on a 1-10 scale, the composer might rate “a solid seven,” but his repertoire is a bit overdone.

That, of course, is not necessarily his actual opinion as practicing orchestral maestro; rather it’s his pose as an actor in character. Revealing a whole new side of his artistry, Tovey performs a guest turn in Lost Mozart’s only non-singing role. He plays a jaded, curmudgeonly music impresario who’s assailed by unwelcome night visitors from a special Limbo reserved for unfinished creative works.

The whole comedic punch of Maria Reva’s script for Act I hinges mainly upon the contrast between Tovey’s rumpled, contemporary persona and the seven orotund operatic shades. To heighten the effect, costume designer Ines Ortner has confected her 18th century ghosts in a pallid meringue of corsetry and perruques.

The spooks corner Tovey into hearing their renditions of a pair of Italian light operas – Lo Sposo Deluso and L’oca del Cairo – which Mozart embarked on in the 1780’s and then abandoned half-completed. Not that the music is sub-standard – it’s Mozart, after all. Rather, the composer was simply side tracked by other projects and commissions. But the lack of formal or narrative coherence has left these fragmentary scores un-stage-worthy over the years.

Reva cleverly takes up the slack with physical comedy, deft anachronisms and double entendre juxtapositions of the on-stage action and the super text translations of the Italian libretto. For their ad hoc staging, director Alan Corbishley has the singers improvise props and embellish their costumes with all sorts of random office flotsam – staplers, folders, coatracks, waste baskets – from the impressario’s humdrum cubicle.

Tovey, for his part, remains unimpressed, alternately dozing off, dandling a prima donna, flipping through his cell phone, tossing off tumblers of whiskey or sardonically eye-rolling and head-waggling in time to the music.

In their increasingly desperate efforts to hold the impressario’s attention and upstage one another, the seven singers emerge as engagingly distinctive personalities. (It helps, too, that they are all accomplished performers who sing like the very angels, ably supported by a 14-member mini-orchestra under the baton of Jim Littleford).

Tenor Frédérik Robert seems equally at home as a simpering toady or a scowling tyrant, according to his role. On the other hand, bari-tenor Samuel Chan makes do for the entire evening with just a single facial expression: open-mouthed wonderment. His consistent flappability proves irresistibly funny on all occasions. Alan MacDonald’s sturdy baritone works well as a courtly swain. Gangly basso Michael MacKinnon seems a natural opera buffo Pantaloon.

Reva’s frothy script provides just enough context to stitch together the Italian fragments of Lost Mozart’s first act. Thin as it is, the airy narrative conceit never obtrudes upon the musical gems of Lo Sposo’s trios or the quartet and septet ensembles in Oca.

Less persuasive was Act Two, when the ghostly singers inveigle Tovey to join them back in Limbo. There they stage a fully costumed English-language rendition of Mozart’s Zaïde – “the completest of the incompletes,” as one soprano informs the impresario.

Precisely this relative completeness, though, works against the script, to my mind.  Zaïde is a singspiel, interspersing arias with spoken dialogue. But the scripted lines and Canadian-accented speech sound jarringly stilted alongside the stylized operatic singing. And I was never quite sure whether the retro staging – all scimitars, turbans and clanking dungeon chains – should be relished as campy or dismissed as merely threadbare.

Nevertheless, Zaïde has musical glories of its own, notably the title character’s opening aria and the concluding quartet. And, in the end, even the impresario winds up persuaded to salvage Mozart’s lost operas from Limbo. At the grand finale, as the house lights come up, Tovey reverts to his role as a conductor.

Except this time, instead of leading an orchestra, he wades out into the crowd to conduct the audience in a standing ovation. And, after their two centuries in Limbo, the spectral performers at last attain their heart’s desire: the fervent applause of flesh-and-blood spectators.