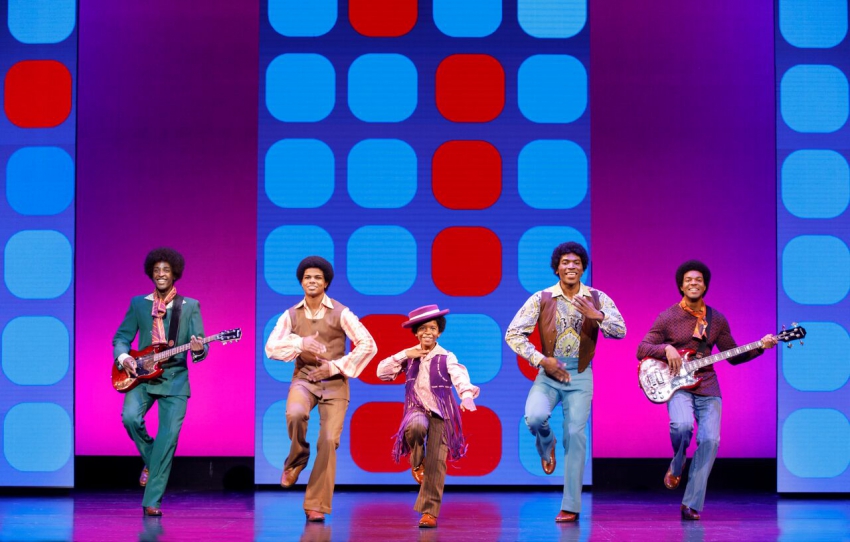 Michael lives! Jackson 4½, back in the day. Photo: BAC

The bathroom queues said it all. At the intermission of Motown, the Musical – just halfway through the three-hour show – they were backed up over 200-deep on all three levels of the QE Theatre.

That’s a testimonial to the capacity crowd packed into the 3,000 seat theatre for opening night of the Broadway Across Canada (BAC) extravaganza. It also clues you to the target demographic – bladder-challenged sexagenarians, hard pressed to make it through a three-hour show without a break.

For us Boomers, the nearly 60 iconic tunes on the programme stand as benchmarks in our personal lifetimes and our eventful decades of shared history. Old chestnuts like ABC, Dancing in the Street, Grapevine, Mr. Postman, Money (that’s what I want), Stop In the Name of Love – the list goes on and on.

No sooner does Matthew Croft’s five-piece ensemble strike up (at top volume) the opening strains of one of these songs than it evokes (for those of a certain age) a whole raft of associations, some intimate and some generationally universal. Strange to think that so many of them are traceable back to one man: Berry Gordy Junior, composer, record and film producer, impresario and founder of the Motown stable of soul/pop music labels.

The man is a tireless promoter of talent, whether his star “discoveries” or (above all) his own. No surprise, then, that in 2011– well into his 80’s – Gordy personally authored the self-glorifying script for the Broadway show that strings together so many chart-topping hits. The dialogue is flat and the delivery wooden. But never mind. Motown’s song and dance numbers more than make up for it.

And, besides, Gordy’s laurels are eminently well earned. Starting at a time when theatres and other public facilities (including, de facto, A.M. radio listenership) were still segregated in much of the U.S., Gordy’s unerring instinct and entrepreneurial drive blasted through the colour barrier to make the Motown style a key strain the in the soundtrack of an era.

And what an era! Amidst all his psychedelic moirés and jukebox chiaroscuros, projection designer Daniel Brodie incorporates fleeting – but powerful – clips of freedom riders, protest marches, Martin Luther King speeches and the ghetto riots in the wake of MLK’s assassination, the shootings of John and Robert Kennedy, the Vietnam War build-up and anti-war rallies.

But all that’s just background scenery. Dominating the stage is a rapid-fire turnover of bravura song and dance. Choreographer Brian Harlan Brooks has marshalled the ensemble into dazzling precision, while leaving plenty of scope for improvisatory hi-jinx. And costume designer Emilio Sosa whips them through scores of lightning wardrobe changes, each more outrageously flamboyant than the last.

Director Charles Randolph-Wright, who first brought Motown, the Musical to Broadway, gets maximum mileage out of his vastly talented, high-voltage, two-dozen member BAC roadshow cast. Pretty much everyone pitches in for 5-6 roles except for a quartet of headliner stars.

Playing Gordy, the upper register of Kenneth Mosley’s fine tenor nearly matches in pitch the lower alto range of his inamorata, Trenyce (just a single stage name) in the role of Diana Ross. But their contrasting voice textures – her smoulder and his astringency – make for striking duets.

As Smokey Robinson, Justin Reynolds conveys a sly drollery that belies his choirboy looks. Matt Manuel’s portrayal of Marvin Gaye transcends the doo-wop repertoire in his a capella rendering of What’s Going On.

But what really brought a tear to many a Boomer eye was the fireplug energy of young Chase Phillips reincarnating the frenetic falsetto of young Michael Jackson way back in the innocent early days of the Jackson Five – long before the voice change, the skin bleach, the Neverland closet skeletons or the propofol.