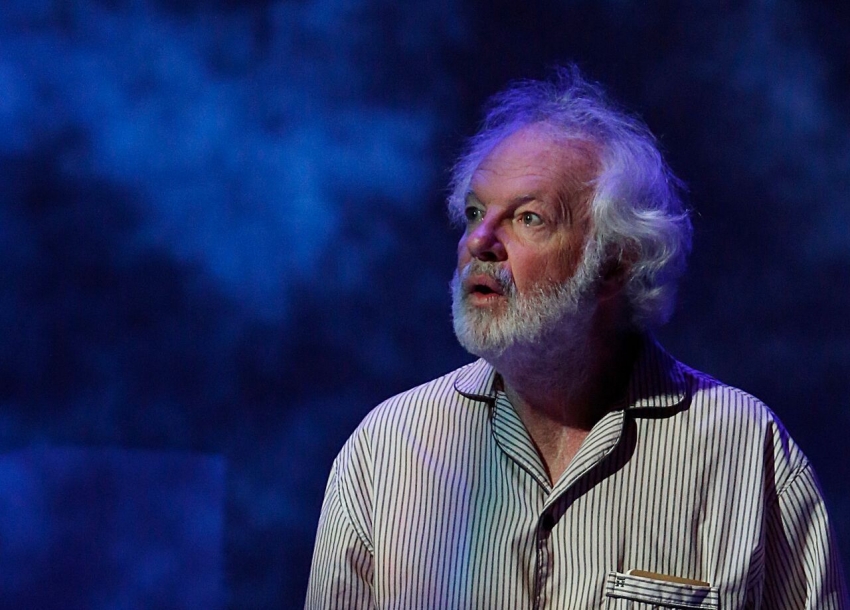 To the sessions of sweet silent thought, Kevin McNulty summons up remembrance of things past. Photo: Tim Matheson

A curmudgeonly has-been fills the patchwork projection screen, ranting on about the appalling decline in – well, just about everything that matters: public discourse, idealism, empathy, grammar.

Beside him, his pinch-faced wife wrings her hands and rolls her eyes in frustration.

He rails about invasive swamp grass and the mind-choking encroachment of online clickbait. Unimpeachable opinions, no doubt, but a grating delivery. Is this guy’s head a well-stuffed attic or a batty belfry?

“I have an excellent memory,” he boasts, and cuts loose with a volley of Wikipedifiable pedantry. “But he can’t even remember what he had for breakfast,” shrugs the lady next to him.

The lady next to me, like a prizefight fan relishing a deft one-two combo, snorts derision at the old fool onscreen and grunts approbation at each new jab by his sourpuss sidekick.

It takes me a parsec to recall who’s that cheering on this slugfest. Ah, yes: it's my helpmeet, my left brain, the real V.O. culture correspondent, without whom I couldn’t even find the venues on time, let alone figure out what to say in these reviews.

“Does that guy remind you of anyone?” she hiss-whispers.

Somehow hauntingly familiar, I have to admit, but I can’t quite place from where. After all, the pompous, tweedy beardnik in question (he’s moved by now from an onscreen to an onstage presence at Richmond’s Gateway Theatre) is pretty alien to me.

The central figure in François Archambault’s play You will Remember Me is from Québec, a place I’ve barely glimpsed in all my long decades as I round on my dotage. But, in Bobby Theodore’s translation, as brought to the Gateway for its B.C. premiere by director Diane Brown’s Ruby Slippers Theatre Company, the story takes on a universalism that speaks to viewers of any nationality and all generations. And especially us baby boomers, who seemed to dominate the preview night audience.

That’s largely thanks to the brilliantly heartfelt performance of Vancouver’s own prolific film and TV veteran Kevin McNulty in the starring role. His character is – or was – a Francophone “public intellectual,” a popular (and philandering) history professor. The high points of his life were the “Quiet Revolution” of the 1960’s-70’s, followed by the heartbreak (for him) of the subsequent referenda.

The chagrin still rankles, but less and less acutely as his memory fades under the onslaught of Alzheimer’s. With frightening momentum, the oblivion erases all ostensible traces of his identity and his dignity.

Clutching at straws, he fills a pocket notebook with scribbled benchmarks of decline, but forgets his jottings as soon as he's penned them. The horror is that he remains aware, in broad outline, of what’s happening to him, even as he loses his moment-by-moment grasp of the episodic progress of the disease.

This hardly makes it easier for any of his intimates to rally the boundless devotion that his syndrome requires. One by one they ruefully half-abdicate; his wife (Patti Allan) leaves him for a man she met on Facebook. His surviving daughter (Marci House) is called away by her high-flying career, so she palms him off on her layabout boyfriend (Kevin Loring).

The boyfriend manages to muster the imaginative whimsy to creatively fill in the blanks of the old man’s amnesia. But he, too, has somewhere else to be (a weekly poker game), so he subcontracts the caretaking to his own adolescent daughter (Sereana Malani). She’s the very picture of ditzy ennui. At $7.50 an hour, why should she humour this irksome crank?

But, paradoxically, the more he sheds of his particularistic personhood, the more he unearths his underlying humanity. In his muddle, the old professor mistakes his young minder for another daughter that he lost decades ago to suicide. And the teenage babysitter rises to the occasion, walking him through his grief and receiving his thwarted love.

It’s a tacit charade that’s maintained knowingly (at some level, at least) on both sides, the better for each of them to grow and heal. Without ever upstaging McNulty, Malani presents a wonderfully humane foil for his tour de force.

So, for that matter, do the other three supporting actors, a testimonial to their professionalism, director Brown’s sensitivity and playwright Archambault’s generous insight.

There are no villains in this play, nor any implausible heroes, either. Just flawed, brave humans making the best of their intractable mortality.

You will Remember Me runs through February 11th at the Gateway. Inspiring to behold.

I only hope, when my time comes, that I can go so gently into that good night. So does the lady sitting next to me.