Les Miz: stagecraft to die for 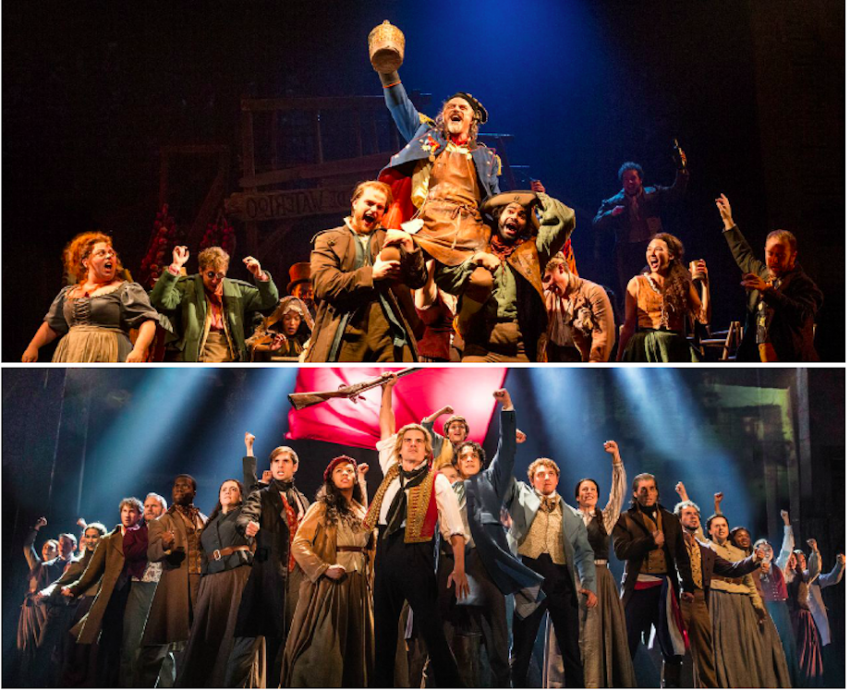 Don’t know if kids still do this, but back in my Late Pleistocene childhood, when our improvisational roleplaying games were still enacted in sandlots and scrublands rather than online, our favourite scenes always involved death throes.

Whether the name of the game was Sci-Fi or Wild West or Antifa or preteen romance, what could be more gratifying than a heroic demise? We’d draw out the moment with picturesque agonies, ringing last words and eulogies by our adoring acolytes. Even the make-believe death of a playground villain could at least offer the gratifying closure of just deserts.

Maybe it’s our subliminally juvenile glamorization of death that accounts, in part, for the lasting appeal of Victor Hugo’s epic 1862 novel Les Misérables. Dismissed as puerile by such literary luminaries as Hugo contemporaries Baudelaire and Flaubert, the novel has been continuously in print since its initial publication. It has inspired a dozen film adaptations.

Nor has the musical version – more of a sung-through opera than a book-and-lyrics Singspiel ­­– been out of production since its original 1980 opening in Paris. Its ongoing 23-year London engagement marks the longest continuous run on the West End. It has enjoyed three revivals on New York’s Broadway, including the current version, now in its fourth year.

And now Broadway Across Canada (BAC) invites brings it to the QE Theatre. Vancouverites have until Sunday to indulge our latent thanatophilia. For few texts in the literary canon are as rich as Les Miz in heart-rending death scenes, and the BAC roadshow cast plays them to the hilt.

Mary Kate Moore, as the wronged grisette and prostitute-with-a-heart-of-gold Fantine, manages to sing her rousing farewell recumbent as a wasted consumptive in a hospital bed. Emily Bautista, as the gamine Éponine, gets shot on the front lines of Paris’ 1832 anti-monarchist uprising, just moments after her street urchin kid brother, Gavroche (Jonah Mussolino) meets the same fate.

They’re followed, in the ensuing fusillade, by what looks like a dozen more student radicals and assorted bystanders; it seems nearly half the 40-member cast gets a chance to die at one point or another in the two-hour production.

Survivors include the romantic leads, Cosette (Jillian Butler) and Marius (Joshua Grosso), as well as the treasonous scamster duo of Monsieur and Madame Thénardier (J. Anthony Crane and Allison Guinn). This latter couple, along with their bumbling cronies, are played with a larrikin élan that seems oddly incongruous with their innate corruption. But they provide a needed comic relief to the generally darkling drama.

Their designs draw heavily on Hugo’s own artwork, with blatant allusions to some of his other 19th century romantic contemporaries like Delacroix, Daumier or even Corot. The set changes move briskly and seamlessly through a congeries of scene flats, revolving stages and cyclorama projections, often strikingly backlit for chiaroscuro effect.

The slick stagecraft and impeccable performances enhance the pathos of all that onstage dying (although, oddly enough, the previous evening’s 1,000-year-old death scene in the minimalistic and highly stylized Kuttiyattam Sanskrit drama seemed somehow more raw and impactful).

The show ends with a rousing call to resistance and revolution, which could prove a puzzler for modern audiences to parse without some grounding in 19th century French politics. (The revolution depicted was a small-R republican uprising against a monarchist counter-putsch to the Bonapartist usurpation of the original revolution).

What to make of all this, and how it may apply to the pathos and promise of our own times, might linger with audiences far longer than composer Claude Michel Schönberg’s un-whistleable score.

As Communist China’s founding premiere Chou En-lai may (or may not) have remarked to Richard Nixon while strolling in the Forbidden City, when asked about the impact of the French Revolution, “It’s too early to say.”