Learning the ropes at Massey Theatre

The sets are the stars in "A Vista," by Fight with a Stick Performance 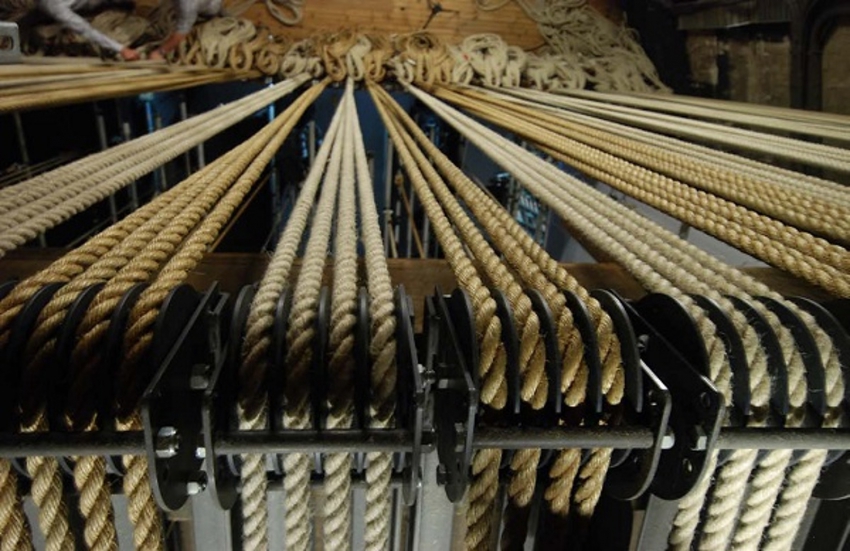 In the right hands, fibrous hemp, a non-psychoactive form of cannabis sativa, can be just as heady as its smokeable cousin. So we learn from Fight With a Stick Performance in its latest installation, A Vista. The production takes its name from a theatrical jargon term for a mid-show scene change that’s visible to the audience on an uncurtained proscenium.

Over the course of three days, A Vista permutes 45 scenic “flies” to ring such scene changes on the stage of New Westminster’s 70-year-old Massey Theatre – a holdout “hemp house” that still relies on a manually-operated system of hempen ropes, lead counterweights and hand-painted canvas scenery. That retro stagecraft makes the Massey an ideal haunt for a “transdisciplinary” collective of installation artists committed (as per the company’s mission statement) to “collaboration with other-than-human materialities.”

Still, it’s the human collaborators that set all other materialities in motion, literally. With an audible creak of overhead pulleys, Fight With a Stick’s dozen riggers – all in ninja black from their stockinged feet right up to their  domed hardhats – ring down the Massey’s 15 bare scene booms from the 47’ high fly loft. They then nudge the booms into contrapuntal pendular swings.

Sound designer Nancy Tam scores the resulting moiré of suspension cordage with a hypnotic background recording of what seems like a railroad shunting yard.  Just as we’re about to be lulled by the clackety clack, light designers Jordan Boivin and James Proudfoot dim the spots and the rigging crew files onstage to lace the scenery onto the booms.

Culled from the Massey’s trove of painted scenery from bygone musicals and concerts, the flies are divided into three groups of 15, displayed on successive days: full backdrops, framing portals and free-standing “legs.” On Day Three, when we went, the 15 “legs” on show included seven New York tenement facades, four tree trunks, Mister Toad’s viney mansion from Wind in the Willows, a pair of starry skyscapes and a sardonically head-scratching portrait of Will Rogers.

None of which were intelligible at first, as they lay in crumpled canvas heaps on the stage floor under the lowered booms. But the riggers, retreating to the wings stage right, hoisted the flies for our inspection. The canvases unfurled one by one, then slowly scrolled on up into the fly loft, then descended again all together in their multi-layered glory, then disappeared and reappeared at different heights in various permutations.

Now and again side spots cast a moving montage of overlapping rigger shadows onto the Massey’s blank upstage scrim.  The silhouettes flail rhythmically, shrinking or growing according to their distance from the light, in a vaguely Sovietesque constructivist paean to the dignity of manual labour.

And, underlying the creak and clank of pulleys, do we detect a faint soundtrack of seething ocean waves? That would be apt for the seagoing antecedents of hemp house stagecraft, descended as it is from the rigging techniques of square-rigged schooners.

From the wings of the stage, where audience members were welcome to venture, you could watch the riggers hauling the ropes in sequence or in unison, smoothly or in spasmodic jerks, and then looping the excess coils over belaying pins. All very ship-shape, right down to the real time co-captaincy of three A Vista line officers: director Josh Hite and dramaturges Steven Hill and Alex Lazaridis Ferguson.

The mute choreography of the riggers contrasts with the stately interplay of the giant flies, now hanging like heraldic banners, then half scrunched onto the stage in a warren of interpenetrating patterns and channels. Will Rogers winks in and out of the scene looking more and more bemused as the hour-long installation heads to a climax.

By the final hoist, the riggers have already gone beyond the measured coordination of a schooner’s deck crew. Now they haul on the ropes with the syncopated exhilaration of (still soundless) carillonneurs.

But then they subside back into calm and steady teamwork. They lower the booms, unlace the flies, fold and stow the canvases and doff their hardhats for a final bow.